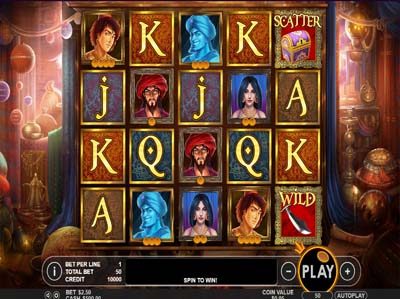 Aladdin’s Treasure is yet another visual treat by slot game developer Pragmatic Play. As you can tell from the name, the game centers on one of our favorite childhood character – Aladdin, and his magic lamp. The reels feature the basic playing card symbols: A, K, Q, and J. They are all uniquely styled to match the general theme. The backdrop features what very much resembles a Middle Eastern bazaar, with all its shiny pots, peculiar lanterns and all things mysterious. Other characters on the reels include Princess Jasmine, Jafar and Aladdin himself. And let’s not forget the Genie from the lamp – he too appears on the reels.

Aladdin’s Treasure features a 5 reel, 4 row layout. There are 50 payline in total, which you cannot adjust. However, you are free to select the coin value in the game, as well as the bet per line. Players can start betting with 50p per spin and increase that to reach a maximum of £250 per spin. You can expect an RTP of about 96.58%.

This slot has a Wild symbol, which comes in the form of an Arabian sword and can replace any of the regular symbols on the reels to contribute to winning combos. In itself, however, it doesn’t offer any payouts. The highest paying of the regular symbols is Aladdin himself, offering up to 1,000 coins. However, let’s get back to the Wild. The only symbols it cannot replace on these reels are the Scatter and Bonus symbols.

The bonus symbol depicts a key and you will be looking to land at least three of it at the same time. You can win different cash prizes, depending on the amount of Bonus Keys you landed. Thus, if you land 3 Keys, you can receive payouts of between 3 and 10.5 times your total stake. Likewise, 4 Key symbols will reward you with a prize between 9 and 31.5 times your stake. And last but not least, you can gain anywhere from 15 to 52.5 times your stake for 5 Key symbols. You will get to play a game of picking one of the available pots, after which you will also be offered a selection of oil lamps to choose from. The one you choose will reveal your prize.

But the game also features a Scatter that come in the shape of a treasure box. It can appear anywhere on the reels. And just like with the Bonus symbol, you will want to land 3 or more of these at a time. If you land the minimum of 3 Scatters, you will receive 15 freespins. 4 and 5 Scatter symbols will reward you with 30 and 50 freespins respectively. What’s more, each of the above options will also grant you a 2x multiplier.

Aladdin’s Treasure is a fairly intriguing game. The graphics are very much up to standard and players can also benefit from the two bonus features.