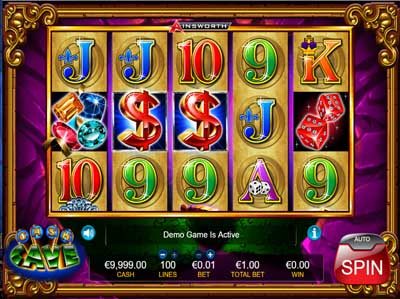 Cash Cave is a video slot by software manufacturer Ainsworth Game Technology, offering rich visuals and high payouts. Everything about this slot game revolves around wealth, riches and cold hard cash. Just like with other slots by this software provider, there will be no soundtrack, no noises to get between you and your gameplay. The backdrop of lavish purple and emerald green offers a great contrast for the gemstones and gold on the reels. And trust us – you will be seeing plenty of those as you go. In addition to all the riches, though, the developers have also managed to squeeze in the lower value playing card symbols. There are six of them in total: A, K, Q, J, 10 and 9. 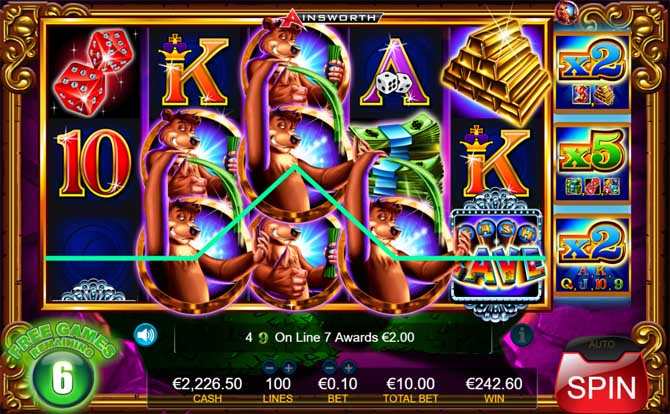 As far as the setup goes, things are pretty simple and straightforward here. The slot design is a grid of 5 reels and 3 rows. You can choose to play with the maximum number of paylines, which is 100. The former option will leave you with a pretty dramatic betting range of £1 per spin up to £75 per single spin. Caution is advisable, though, due to the high volatility and underwhelming RTP of 94.04%.

We’ve got to say that the Wild symbol choice of the developers did both surprise and amuse us. It pictures a bear, holding a bunch of money bills. When he’s part of winning combinations, he’ll even throw them at you. And being a part of winning combos is precisely what he’s good at. The Wild will be able to stand in for any of the regular icons to help create winning sequences. However, the only symbol it won’t be able to substitute for is the Scatter. And it can also only appear on reels 3, 4 and 5.

The Scatter, in turn, comes in the shape of the game’s logo and will also offer you the highest payouts on these reels. But in addition to that, the Cash Cave Scatter symbol will also be able to trigger the freespins bonus feature. In order to do so, you will need to land at least 3 Scatters anywhere in sight. This will award you a total of 10 freespins, during which the Wild will also be able to appear on reel 2, as well.

And what’s more, the Bear Wild symbol will also offer multipliers on winning combinations that it becomes a part of. The exact multiplier will vary from symbol to symbol – you can check to table in the game settings for accuracy. But it can range from 2x to 8x. And you can also gain another 5 freespins by again landing 3 or more Scatters.

Cash Cave is a highly volatile slot game. And while it can grace you with very high payouts, it can also eat up your bankroll in no time. Other than that, the cool visuals and smooth gameplay make this a very pleasant slot game.