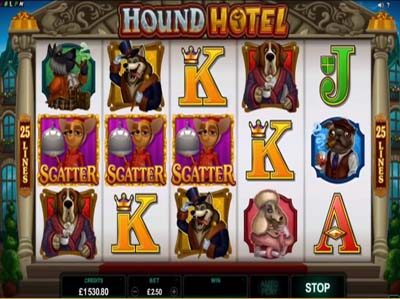 The Hound Hotel game from Microgaming will see you be given the opportunity to check in to the most lavish pooch guest house in the world. With shimmering gold dog bowls in place atop columns at either side of the reels, you’d definitely be a pampered canine within these walls. As such, you’ll find a variety of guests who have checked in for a stay as icons on the reels. These exist in the form of a cigar-smoking pug wearing a flat cap, a Scottish terrier puffing on a pipe, a female poodle dressed in fine clothing, a Siberian husky with a top hat and cane, and a St. Bernard clutching on to a cup of tea.

Further to this, there are five reels and three rows worth of a layout incorporated into the game, while Microgaming have also integrated 25 different pay lines. These are fixed in position by the developer, however, you do have the chance to be able to change the value of your wager, starting with adjusting the coin size between £0.01 and £0.50. In addition, you can alter the amount of coins that you wager per line, and there’s a range of between one and 15 available here. This allows you a maximum overall wager amount of £125 per spin.

There’s the inclusion of a wild icon, and it is represented by its logo. The wild, is replacing all other symbols, with the exception of the scatters. There’s also an extra perk to this symbol as it is also included in the randomly triggered ‘Dashing Wild Feature’. This sees three dashing wilds land in random positions on the reels after any spin with no win.

As far as the scatter is concerned, this is represented by the chihuahua dressed up as the waiter. This will pay out in any position, but if you spin three, four or five into view, you’ll also trigger the ‘Hound Hotel Bonus’, which awards you with one of five freespins features.

You’ll be taken to three rows of hotel room doors and you need to pick a door on each level. The first floor awards you wild feature, the second floor door hides your multiplier, and the third floor door you choose presents you with your total amount of freespins. The features you can win include super stacked wilds, expanding wilds, wild reels, split wilds and super wild reels.

This game is full of fun and entertainment. It’s a really wonderful product to play through, and it features high quality graphics as well as thoroughly pleasing game play.