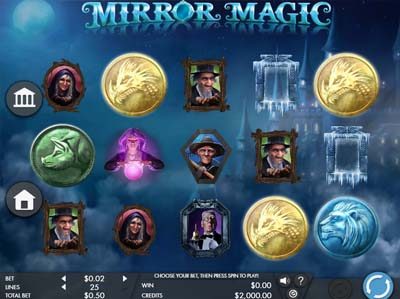 Mirror Magic is a haunting and visually sophisticated slot game by developer Genesis Gaming. This slot game will surprise you with its appearance as soon as it loads. First of all, you will notice that there are no actual reels, or more like they’re invisible. This means you can clearly see the backdrop that pictures a large castle on the top of a cliff. And with the moonlight piercing through the clouds, everything has an eerie shine. There’s also a lovely, enchanting soundtrack to further intensify the atmosphere, in addition to the occasional wolf howling. As for the symbols, there’s a huge variety of different kinds. So you will probably need to check the paytable occasionally to know which is which. They are for the most part portraits of different people, as well as four coins with different creatures on them. The most lucrative of them is the king’s portrait. 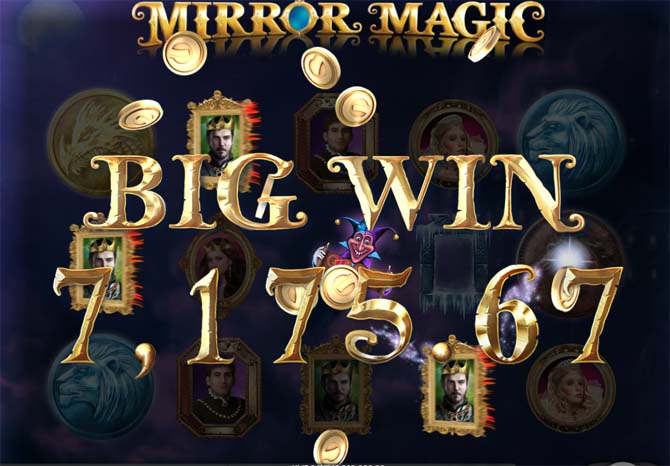 The setup features 5 reels and 3 rows with a total of 25 paylines, whereas you may adjust their number. Stake amounts are also easily regulated and range from 25p per spin up to £250 per spin. This game also has a very appealing RTP of 97.17%.

Mirror Magic features a creepy jack-in-the-box type jester as its Wild symbol. It is also among the highest paying symbols in this game. And it can also replace any of the portrait or coin symbols on the reels. The only symbol it cannot substitute for, however, is the Scatter. 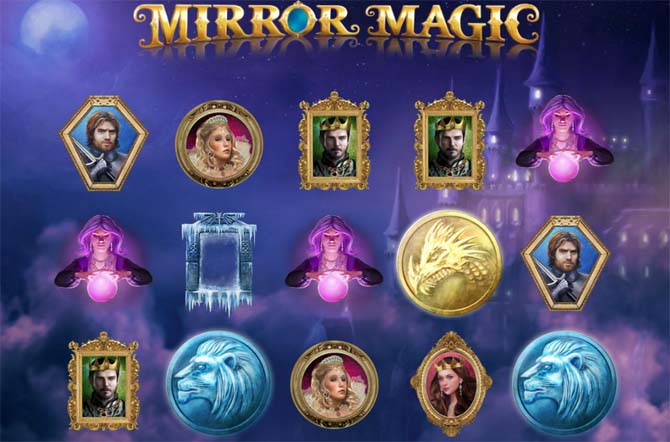 The Scatter comes in the shape of a pink haired fortune teller with a crystal ball. She can appear in any position on the reels, but in order to benefit from her supernatural powers, you will be looking to land at least 3 Scatters during a spin. This will activate the Mirrored Pays Freespins feature and will award you certain amount of freespins, depending on the number of Scatters you landed. Thus, 3 Scatters will grant you a total of 10 freespins, whereas 4 Scatters will give you 15. Finally, 5 Scatter symbols will award you the grand total of 20 freespins.

You will be playing on a separate set of reels, where all the lower value beggar and servant symbols will be gone. In their stead there will be royals, which will make for higher potential wins. What’s more, you can also retrigger the feature by again landing 3 or more Scatter symbols anywhere on the reels. Just like in the base game, this can give you 10, 15 or 20 freespins, depending on the number of Scatters. Thus, you can potentially gain up to 40 freespins!

Mirror Magic is a wonderful slot game, with fantastic visuals and a superb design. Everything to the finest detail has an air of sophistication about it, and that is precisely what this developer is particularly known for. However, do keep in mind that this is a medium to high volatility slot game, so you may require some caution. The high RTP of 97.12% is also a very welcomed.