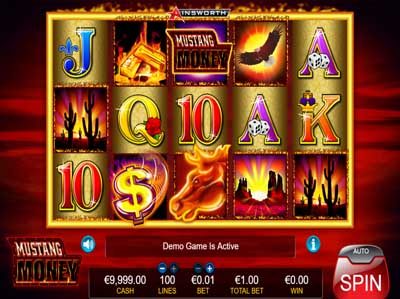 Mustang Money is a fiery slot game by software developer Ainsworth Game Technology with a theme that’s all about temperament. The mustang horses are known to be wild, untamable and that is what this game is all about. There’s no soundtrack here to set the mood or distract you from it – only a blood red backdrop to set a contrast for the flames on the reels. The game features 6 of the lower value playing card symbols: A, K, Q, J, 10 and 9. Though not particularly styled, they still manage to fit in here well. Aside from them you will also see different desert imagery, such as tall cacti, a rocky landscape and a bald eagle against the blazing sun. The highest paying of these regular symbols is the $ sign. 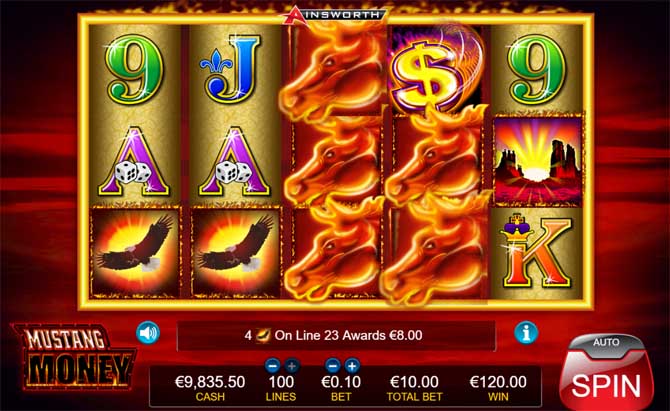 The setup in Mustang Money features the regular 5 reels and 3 rows. You can play with up to a whopping 100 paylines, but you are also free to regulate that number and play with a lesser one. When playing on the maximum number of paylines, bets can get rather expensive, starting at £1 per spin. The largest amount you can stake, however, is £75 per spin. And the RTP here isn’t too impressive at about 94.38%.

The Mustang symbol here is the game’s Wild and can replace any of the other symbols, save for the Scatter, in order to help create winning sequences. Note, however, that you will only see it on the rightmost reels 3, 4 and 5. And the Scatter is certainly a symbol you will want to keep an eye out for.

It comes in the form of the game logo (Mustang Money) and is the most lucrative symbol on these reels. It can award you up to 100 times your total stake amount. You can also expect to see it in any position on the screen. But in order to make the most of it, you will be looking to land at least 3 Scatter symbols simultaneously during a spin. This will activate the freespins bonus feature and you will receive a total of 10 freespins. In addition to those, a new symbol will also be added to the reels – the Coin symbol.

It will only appear on reels 2 and 4 and will act as a second Wild, substituting for any of the regular symbols. But in addition to that, it also comes with a few extras. If it lands on reel 2 and is part of a winning combo, it will give you a 1x or 2x multiplier on your payouts. But if it lands on reel 4 and is also part of a winning sequence, that multiplier could be bigger. It will range anywhere from 1x to 5x. And if it appears on both reels, then those multipliers will add up.

Mustang Money is a highly volatile slot game that is stripped clean of any distractions. It is fast paced and dynamic and also a haven for high rollers.