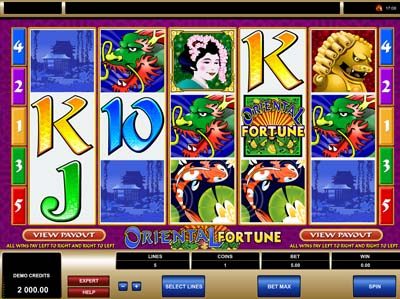 Oriental Fortune is one of the many online video slots which utilises an Eastern Asia theme, incorporating elements of Chinese and Japanese culture into its reels. Your game play will be accompanied by the sound of traditional oriental music, while the reels have various different thematic icons incorporated into them, such as the koi carp and the ornately adorned geisha. There’s also a symbol of a festival dragon, as well as another of a golden lion and a final one of a dusky scene featuring a pagoda.

In addition, you’ll find that this game has a total of five different pay lines integrated into it, and you do have the option of customising these to suit your own preferences, either by using the ‘Select Lines’ button, or you can click on a number from either side of the slots reels. The amount that you wager per round can only be adjusted by switching the amount of active pay lines, as the coin value is set a £1 per line, so the maximum overall bet you’re able to place is £5 per spin.

The aforementioned icon of the pretty geisha girl is this game’s wild icon, and as a wild, it will substitute for all other symbols on the three reels in order to form a winning combination. This is really the only additional speciality that has been incorporated into this game.

The highest paying standard symbol is represented by the game’s logo, and if you spin five of these on to an active bet line, you’ll receive a maximum pay out of 5,000 coins altogether.

There’s little that can be said about Oriental Fortune from Microgaming. It’s not going to win any awards for the game with the highest quality of graphics incorporated into it, and it’s not going to win any for the biggest selection of special features included either. However, if you’re the sort of person who enjoys playing those products which have simpler interfaces and gaming options, it could just be the one for you.