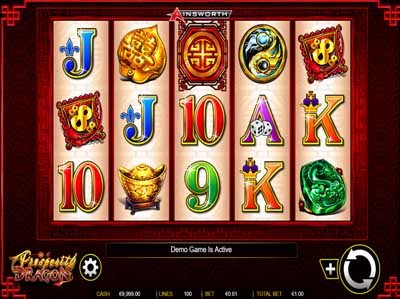 Prosperity Dragon is a Chinese themed slot game by software provider Ainsworth Game Technology. This is a very common genre in the online gaming world, and we have, in fact, seen other games in this genre by this very same developer. The background here is a very dark red color – somewhat typical for Chinese themed slots. And the symbols here are also mainly about traditional Chinese imagery, such as the Yin Yang symbol. Other icons on the reels include a lovely jade stone with a dragon carved in it. There’s also a gold pot and gold peach here, in addition to the regular lower value playing card symbols. It will be a relief for those, who don’t like distractions during gameplay, that there is no music here. 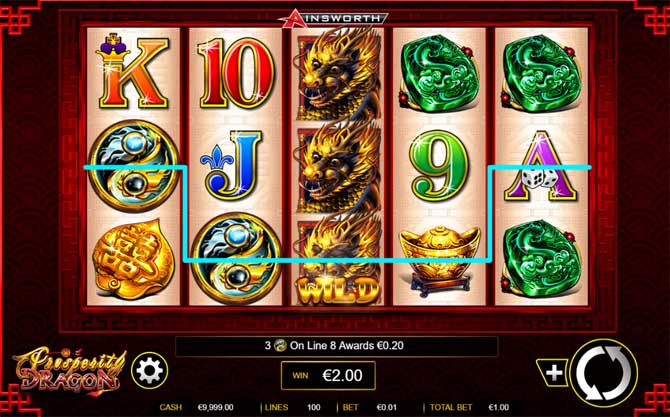 While the setup here is pretty much the same as in other Ainsworth slot games, the controls are a bit different. Contrary to most slots by this developer, you will need to enter the game settings to adjust wager amounts and payline numbers. The maximum on this 5 reel, 3 row grid is 100 paylines. This will make for a betting range of between £1 per spin and £75 per spin. Furthermore, the RTP here is rather low at about 94.4%, so that’s certainly something to keep in mind.

The Wild symbol in Prosperity Dragon is none other than the Dragon symbol. In the base game it can appear on the rightmost reels 3, 4 and 5 only. But that won’t stop it from being able to stand in for any of the regular icons to contribute to a winning sequence. The only icon that it will not be able to substitute for is the Scatter.

And in the base game, that Scatter will come in the shape of a Pattern symbol. With it you will be able to activate the single bonus feature here – the freespins feature. Doing so will require you to land at least 3 Scatters simultaneously during a spin. This will reward you with a payout of up to 50 times your total stake and 10 freespins. During this bonus round you will benefit from several new Wild symbols that will appear on the reels. They are the silver and gold stars. All Wilds in the bonus feature will be able to substitute for all other symbols, except for the other Wilds.

In addition, they will also all appear only on the middle three reels 2, 3 and 4. If you land all three of the silver star symbol, this will trigger the Super Choice feature. There, you will have three options of different freespin and multiplier combinations to choose from. Likewise, landing all three gold star symbols will give you the Ultimate Choice with even better options.

Prosperity Dragon doesn’t have that title for nothing. It can prove to be a very lucrative slot game, but due to its high variance, it may just as easily prove devastating to your bankroll.