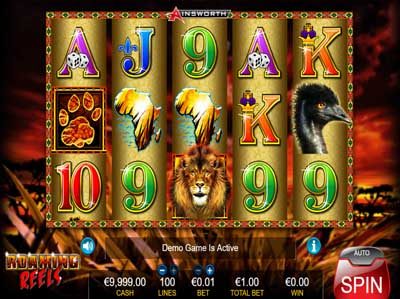 Roaming Reels is a beautifully designed African themed slot game by software provider Ainsworth Game Technology. The backdrop pictures the fiery sunset over the savanna, with the black silhouettes of trees against the setting sun. But typically for this slot developer, you will notice there is no matching soundtrack to enhance the theme. Moreover, there is no soundtrack whatsoever, other than the clicking of the reels when they start and stop spinning. As for the symbols, they include the lower value playing card icons A, K, Q, J, 10 and 9. The higher value ones depict various inhabitants of the African savanna, such as zebra, gazelle and lions, as well as the representation of the African continent. 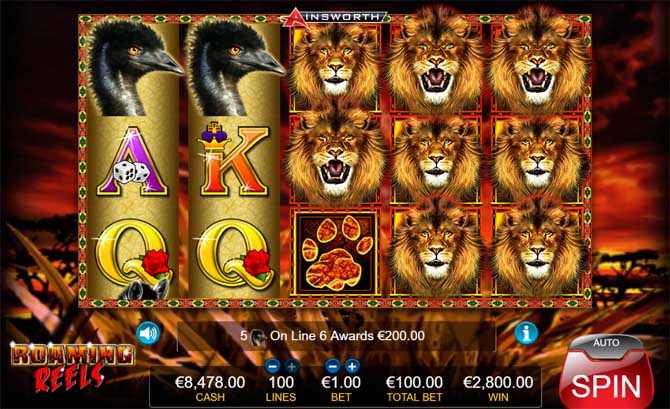 Ainsworth slot games all tend to share a similar setup and Roaming Reels is no exception. It has 5 reels and 3 rows, with a total number of a whopping 100 paylines. You can also adjust that number to suit your preferences if you so choose. But for the maximum number of paylines, the betting range starts at £1 per spin. The maximum that you will be able to wager on these reels is £75 per spin. The RTP here is also standard for most games by this developer – 94.14%.

The majestic lion is king on these reels and also the Wild symbol. And as is the rule for Wilds, it can replace any of the regular symbols to help out in creating winning combos. However, it cannot replace the game’s Scatter symbol. What’s more, you will only be able to catch the Wild symbol on the right-most three reels: 3, 4 and 5.

The Scatter symbol, in turn, comes in the form of a tree. It can land in any position on the reels, but in order to make the most of it, you will need to land at least 3 during the same spin. Three Scatter symbols will award you a total of 8 freespins. 4 Scatters, in turn, will give you 12 freespins, whereas 5 Scatters will give you a maximum of 20 freespins.

During the bonus feature, the Wild symbol will appear only on reels 1, 3 and 5. What’s more, the Paw symbol will become more lucrative throughout the duration of the feature. Instead of offering payouts of up to 5x your stake like in the base game, now it will pay up to 20x your stake. And last but not least, players will also get a chance to increase the number of their freespins. If you land another 3 Scatters during the feature, you will get another 5 extra freespins.

Roaming Reels is typically fast paced, as is custom with most games by this provider. And likewise, it’s also a high variance slot game, so be careful, lest you want to quickly lose your whole bankroll. The stakes are also pretty high, which can play both in your favor and against you.