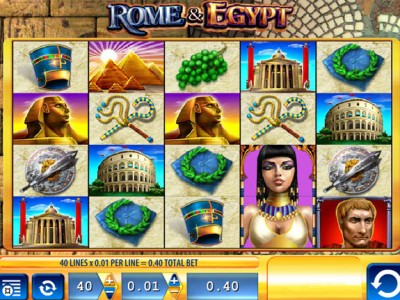 The vastness of both the country of Egypt and the city of Rome are both etched in history, and so it seems very apt that a slot game should be created to mark both of them. With this product from WMS, you’ll get to see reels filled with pyramids, various items of the Pharaohs attire, and Cleopatra from the Egyptian civilisation, while the icons relating to ancient Rome include bunches of grapes, swords and shields, laurel wreaths, and Julius Caesar.

The game itself provides players with five reels and four rows worth of an interface, and there’s a total of 40 separate paylines included alongside. These are not fixed, so players can alter them as preferred. The coin value included in the game can be changed between £0.01 and £5.00 per active payline. Therefore, a total maximum wager of £200 can be placed on every spin.

Cleopatra and Julius Ceasar appear as stacked wilds on the reels. If you cover the entire five reels with Cleopatra or Caesar, you’ll receive a payout of £2,500. Or, should you cover the reels fully with a mixture of Caesar and Cleopatra, you’ll be rewarded with £1,250. These wilds stand in for any other symbol on the reels to provide a winning combination.

Rome & Egypt takes two ancient civilisations and crafts them into a great game. The stacked wilds of Cleopatra and Caesar make for perfect additions to the game.