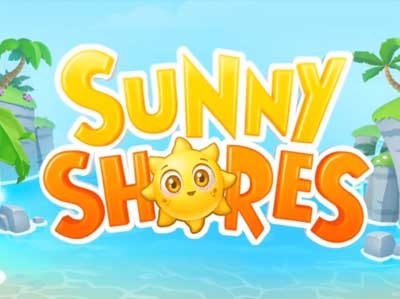 Sunny Shores is an online slot game by online slot machine manufacturer Yggdrasil. If you feel like heading to some tropical island, with nothing but sunshine, sandy beaches and magical waterfalls around for miles – this slot game can offer you that experience. Well, at least for a little bit, while you indulge in gameplay. Yggdrasil typically offers high quality visuals in its slot games, and Sunny Shores certainly makes no exception. There are lovely, crystal clear turquoise waters stretching as far as the eye can see. And given that the reels are see-through, you can see everything. To the sides there are calming waterfalls, with palm trees and flowers at the tops. There is also a very nice soundtrack to go along with the cool graphics and overall setting. Yet even with all that, there’s a soothing sense of simplicity that surrounds gameplay here. 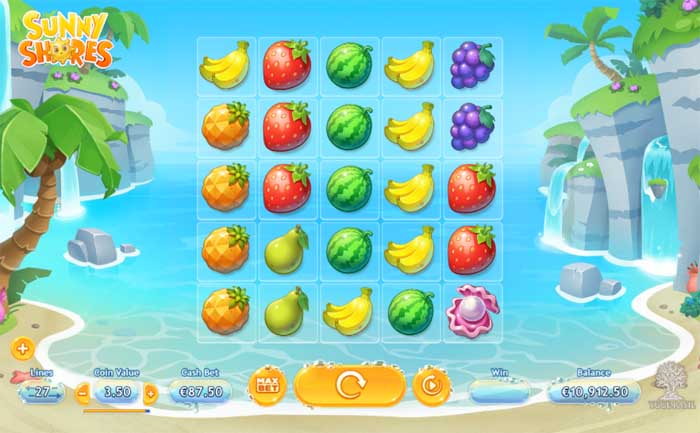 Notice also that the symbols on the reels in Sunny Shores are mainly just different types of fruit. Some are more exotic than others. But the lower value icons start off with the pear symbols. For each symbol type that follows, there’s an ever growing increase in value. So next we have the watermelon symbol, after which are the grapes and following them we have the bananas. This brings us then to the higher value icons, namely the strawberry and pineapple symbols. And last but not least, the most lucrative symbol on these reels is not a fruit, but a clam revealing a shining white pearl. Landing it in a winning combo can award you up to 300 coins. As for the layout here, it’s quite unusual. It forms a square grid of 5 reels and 5 rows. The total number of available paylines in this slot is 27 and those will not be subject to adjustment. However, stakes here enjoy a pretty flexible range. In fact, you can wager anything from only 10p per spin up to the maximum of £125 per single spin. The average RTP here is also quite satisfying at about 96.2%.

Besides that symbols that we already described in the above section, Sunny Shores also boasts one more symbol and it also isn’t a fruit. As a matter of fact, it’s the sun itself, with a kind of surprised face on it. You will genuinely want to look out for this symbol. It doesn’t offer any real payouts the way that the clam and other icons do. Instead, it acts as the game’s Wild symbol. And as such, it will be able to appear in any position, anywhere on the reels and replace any of the other symbols present. There are no exceptions as to the symbols that the Wild can substitute for. So, in that sense, it will be lending you a helping hand in order to form better winning combinations. 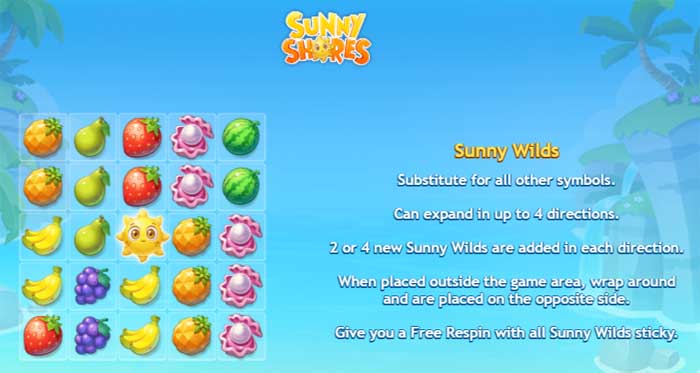 However, this isn’t by far the only thing that this Sun Wild symbol will be able to offer players throughout gameplay. As a matter of fact, it comes with a feature called the Expanding Sunny Wild. And as part of this feature, any time you land a Wild symbol on the reels, no matter of the position, it will expand in at least 2 opposite directions. This can occur diagonally, horizontally or vertically and will usually include two or four extra Wilds in those directions. However, you can also benefit from far more Wilds, with a potential maximum of up to 16 of them! Better yet, this feature can also go beyond the reel set. And should that be the case, this means the Wilds will simply continue on the opposite side of the reels. 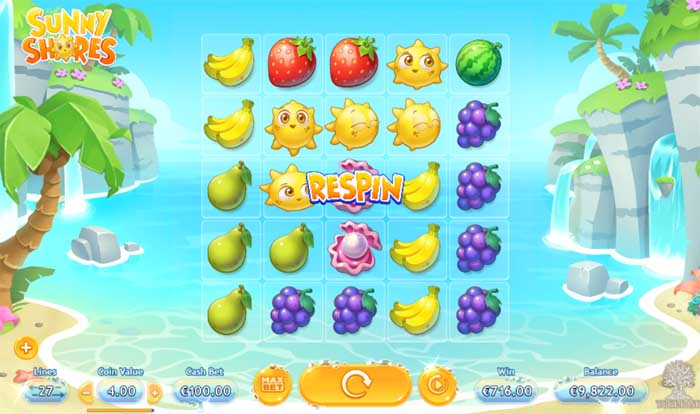 And what’s more, this feature will also trigger a free respin! So, once you have lined up all the extra Sunny Wilds on the screen, all the other symbols will take a spin. However, the Sunny Wilds will remain in place for the duration of the respin. That way they will still be there to help you pocket more prizes for new winning combinations that they will help form. And better yet, if you happen to land so much as one new Wild symbol as a result of this respin, you will automatically trigger a second one. And this can keep going until you don’t land any new Wilds.

Sunny Shore is very basic in terms of its gameplay and you might have already guessed that when you saw all the fruit symbols on the reels. There’s clearly a reference to classic slot games. However, even without there being any traditional bonus features like freespins and pick-me games, the setup is still quite exciting. Especially once those respins start to kick in, and you start landing more Wilds, that’s when the action truly begins. And you will also see them kick in fairly often, as this is after all a low to medium variance title.