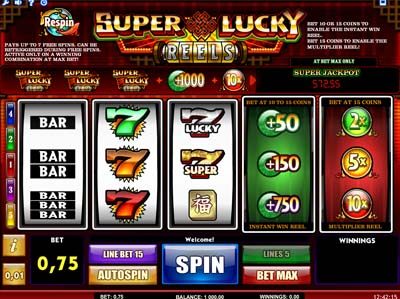 Another classic slot machine offering from iSoftBet comes in the form of Super Lucky Reels, and this one also has its own special perks which allow it to differ from a vast majority of the traditional slot games. You’ll find that it features a selection of different symbols, starting with a choice of different BAR icons in single, double and triple format. There are a few different number 7 icons as well, in various colours, while a rune with a Chinese symbol on it is also involved.

The base game provides a layout of three reels and three rows, and iSoftBet have also added a total of five separate pay lines as well. These cannot be customised in any way, but if you adjust your wager level up by altering the line bet past 10, you’ll open up the final two reels, allowing you to spin through five reels of icons. The wager can further be altered by changing the value of a single coin between £0.01 and £0.50, and if your line bet is at the highest level of 15, you’ll be playing a maximum overall bet of £37.50 per spin.

As noted, there is the chance to activate the final two reels by increasing your wager, but these do not feature the regular symbols. Instead, the fourth one is an instant win reel, while the fifth is the multiplier reel, featuring icons relating to such. Multipliers stand in the range of between times two and times 10, while instant wins stand in the range of between +50 and +1,000.

There’s also the addition of a Respin symbol, and this one pays up to five freespins of the reels. These are only active on a winning combination at maximum bet level.

Furthermore, there is a super jackpot added to this game, and you are able to win this by spinning three of the game’s own logo symbols, plus an instant win of +1,000 and a multiplier of times 10. Again, this needs to be at maximum bet level. You can view the Super Jackpot amount in the top right hand corner of the game screen.

Super Lucky Reels is a game that takes a little bit of time to get used to, considering there are additional reels to activate and icons to get used to. However, it does provide an entertaining game on the whole.