Can you beat an online slot machine? 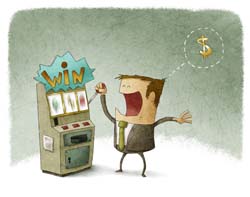 For decades in the gambling world as a whole, there have been people who have come up with “systems” and other ideas for beating casino games. Some of these systems are rooted in real mathematics that make sense and that are technically sound, such as those for counting cards and using basic strategy in blackjack. Others, however, are completely dubious and are based on a lack of understanding of the actual mechanics of a game. Systems for beating online slots, for example, are of the latter variety.

The RTP and What It Means

One of the measurements taken of any particular online slot is its RTP. This stands for “return to player,” and it’s based on a percentage. The idea is that if you wager any amount of real money on the game, the RTP will tell the average amount that you will expect to win back based on a percentage. If you wagered $100 on a game with a 97 percent RTP for example, then you would average winning back $97 for an average loss of $3. Obviously you could win more or lose more than this depending on what happens, but this is the average that you’ll see over the long run for everyone playing the game.

As a player, beating a game would mean having an RTP of more than 100 percent, and having an RTP of exactly 100 percent would mean that you would break even at the game. While there are things you can do to maximize your RTP, you won’t be able to change the maximum RTP that you can achieve in a game, which makes it mathematically impossible to beat slots without some kind of outside influence.

How to Maximize Your RTP

If you want the best chances to come out ahead when playing online slots, then you’ll need a combination of strategy and bonus value. The strategic side comes from knowing how to maximize your RTP through the various choices that you do have about what you’re playing. The first option you have is the actual game that you choose to place a wager on, and since some games have higher RTP values than others, it’s clear to see that this is a place where you can gain an advantage.

Another strategic option for boosting your RTP comes from playing certain progressive jackpot games. Whenever the jackpot gets large enough, you can actually achieve a higher RTP than average in the game. This works out because the money from the jackpot is taken from the actual wagers that players have made instead of coming from the casino itself like normal prizes, so it’s actually theoretically possible for a progressive slot to achieve an RTP of more than 100 percent. The huge variance, however, would not necessarily make this a good bet.

On the bonus side of the situation, you should take advantage of bonuses and other promotions that give you value as long as they make sense. A slot bonus with favorable terms and conditions can add value to your bottom line, but if the wagering requirements are too high, or if the bonus isn’t cashable (or both), then you can actually end up worse off from taking a bonus than if you hadn’t.

Getting the Most From Online Slot Bonuses

To give a simple example of how to identify good wagering requirements for a slot bonus, suppose you’re playing with a deal that will give you a $150 bonus for $4,000 worth of play-through total, and you’ll be able to cash this deal out once you clear the requirements. If you play through this amount with a slot that has an RTP of 98 percent, then on average you’re going to lose 2 percent of however much you wager on the game. Play through $4,000, and you’ll be set to lose $80 on average. However, because you’re getting a bonus of $150 on top of that, you’ll actually come out ahead an extra $70, giving you profit for playing the game that you wouldn’t have received otherwise.

There is no “magic bullet” system out there that’s going to always guarantee that you end up on top when playing online slots. However, you can do a number of things to maximize your RTP, which in turn will boost your chances of winning overall. This is the type of thing that is within the grasp of any player because it’s based on simple things like game selection, making sure you’re playing with all paylines activated and making sure you’re getting the best bonuses available. Overall, if you put it all together, then you will have better chances than average of winning, but it will never be a sure thing.