Featuring potions, vials and various wizardry items, Frog Grog by Thunderkick makes you wonder why it didn’t take a more mystical name. Then you see the wild – the titular burping frog, and things become much clearer. The setting is fairly interesting – a cauldron in front of a shelf that houses the symbols, wizardry paraphernalia to the sides, decent enough soundtrack.

In a nutshell, this slot packs 5 reels, 3 rows and 23 paylines. The paylines are one-way, paying from left to right, and will give you a max payout of 200 times your stake. There’s no progressive jackpot, though you can win, theoretically, as much as 1,616x the stake if all the pieces fall in line. As per usual, the minimal bet is 1 coin per line, per spin, whereas the max is 10 coins. Given that the coin value ranges from 10p to £100, this could yield some hefty sums. The RTP clocks in at a decent 96.10%.

Somewhat different from the usual, this game doesn’t feature the high-value card symbols. Instead, there are vials, bottles and jars of blue, green, purple and red potions, a miniature glass garden with a single rose, as well as a trapped moth (the highest paying symbol) and the titular frog (the wild).

There are three or four bonus features, depending on how you want to view the multiplier feature. Let’s examine them step by step.

The first thing you’ll notice are the dropping symbols. The thing is, Frog Grog is a bit different from most slots in that it has no reels. Instead, symbols that make a winning combo (or multiple) are replaced with other symbols dropping into place, whereas the rest remain where they are. Here is where the multiplier feature kicks in – as long as you’re in a winning streak, the multiplier will grow. It starts at 1x on the first winning spin, then goes to 2x on the subsequent, then 3x, 5x and 7x, skipping 4 and 6 (which seems a bit odd). Whether you view it as a part of the dropping symbols feature or a standalone makes no difference game-wise. 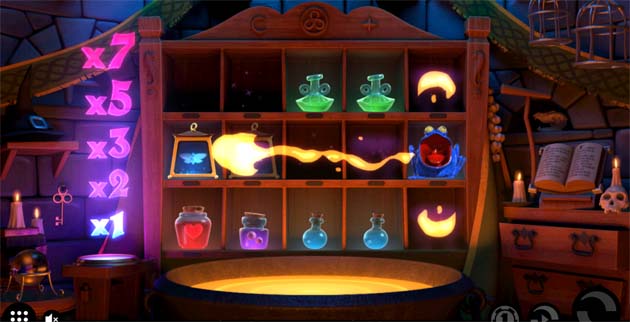 The burping frog acts as a specific sort of expanding wild. Yes, it substitutes any other symbol, which is the basic purpose of wilds, but it also clears the respective reels and rows it occupies of all the symbols (except other wilds), making more room for new symbols to drop.

The game has no freespins per se, but it does feature a bonus game called Mystery Game. This feature activates randomly on any spin (there are no scatters), as long as the spin is not a hit. In theory, you could play all day without ever seeing it, or you could get it twice in one hour, there’s just no telling. What it does is take all the low-value symbols, leaving the high-value ones (the moth, the rose and the frog), making room for more symbols to drop.

On a balance, Frog Grog seems like a halfway decent slot – it’s got great graphics, nice animations, somewhat endearing atmosphere, but the gameplay is quite uneventful, and even though there are 4 special features, none of them actually do much to help you increase your odds.