Hot Sync is a rather traditionally themed slot game by software developer Quickspin. The layout and design are as simplistic as they get, and in a very neat, clean way at that. The backdrop pictures a blue purplish broken down surface. As for the symbols on the reels, they showcase all the most typical slot machine fruits. You’ll have cherries, lemons, plums and watermelons as the lower value symbols. Next are a few more traditional, retro images, such as the gold bell, a silver star and the lucky 7. Last but not least, is the diamond symbol, which is also the most lucrative of the regular symbols here, offering payouts of up to 25 times your stake.

The layout features a total of 20 fixed paylines and a grid of 5 reels and 3 rows. Players can select their stake amounts, which span from 20p per spin up to £100 per spin. The RTP is an average of about 96.29%.

As traditional and vintage as this slot game tends to look, it does have features that aren’t all that vintage. In most slot games that try to mimic the old school slot machines there are typically no bonus features. Luckily, that’s not the case here. Let’s start off with the Wild symbol, which is the highest paying symbol on the reels. It can replace any of the other symbols to help create winning combos. However, it can’t substitute for the Bonus Scatter and the Hot Sync Wild symbols. Both of those are present in Hot Sync. 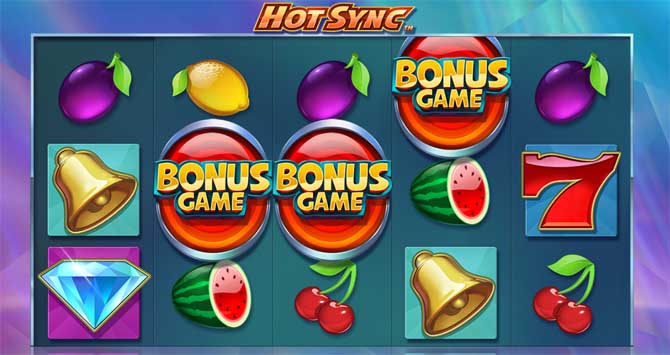 In order to trigger this feature, you will need to land 3 Bonus symbols simultaneously. However, the Bonus symbols can only appear on reels 2, 3 and 4, and only in the base game. And once you land the 3 Bonus symbols, you will receive 8 freespins. Throughout the duration of the feature, if a Hot Sync Wild appears, it will turn the whole reel Wild and remain in place for the remained of the freespins. 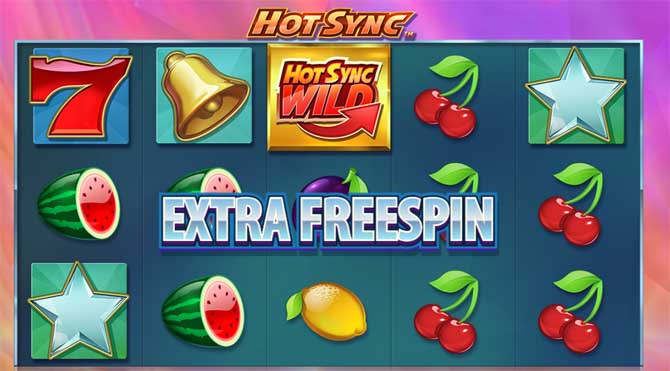 Hot Sync is overly simple to play and the bonus games do offer a nice touch to the traditional theme. In addition, they can also make for some very handsome payouts with prizes of up to 2,848 times your stake. We are very found of this slot machine from Quickspin, and we would lable it as a high variance slot machine. The free spins feature has a great potential and if you are lucky to get many hot sync symbols locked in early, you are in for a big win. The RTP of the slot is also acceptable, at 96.29%. Hot Sync is definitely one of Quickspins best releases and we would recommend you try it out.