Multifruit 81 is a classic themed online slot game by software developer Play’n Go. As you can tell from the title, it centers on the traditional fruit symbols. However, the developers have really upgraded them, if you compare to true old school slot machines. In fact, some of them literally look good enough to eat. Though despite the somewhat modern touch to the symbols and graphics quality, the design still is very much in line with the genre. So much so, that it actually resembles a genuine vintage one-arm bandit. The backdrop here is fairly simple, not to distract you from gameplay. And there’s even a soundtrack that sounds exactly like old school slot machines do. Only it’s not the boring generic sound that you hear in a lot of modern day slots either. 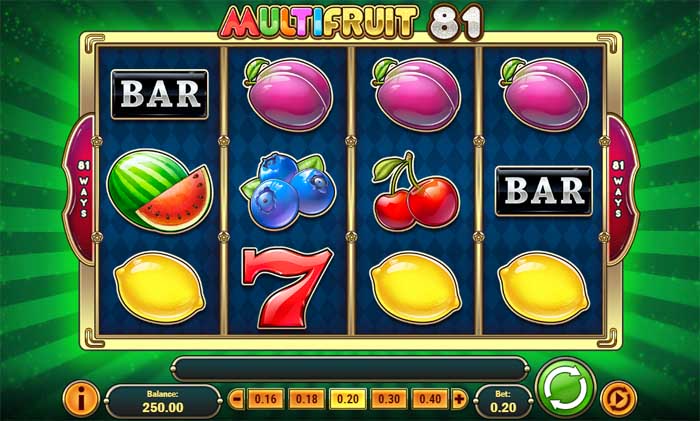 As for the symbols here, the lowest value icon is the BAR symbol. Only after that do we have the traditional fruit icons, like the cherries and the lemons. After that the value rises up a notch further for the somewhat higher paying oranges and plums. And then there’s a dramatic increase in payouts for the pretty realistic looking blueberries, following which is the watermelon symbol. And last but not least, we have the red lucky number 7. This is the highest value symbol on these reels, offering prizes of up to 100 times your total stake. As for the layout in this slot game, it’s somewhere in between modern slots and classic slot machines. It features a grid of 4 reels and 3 rows, with a total of 81 ways to win. The paylines here are not subject to adjustment, but don’t let that discourage you at all. The available betting range here is far more liberal than you might think. Stakes span from a minimum of 2p per spin up to the maximum of £100 per single spin. The average RTP you can expect in this slot game is also pretty decent at about 96.55%.

Unusually for this genre, Multifruit 81 actually also features its very own Wild symbol. It comes in the shape of a Joker symbol and can appear in any position on the reels. It will also be able to substitute for any of the other symbols on these reels – no exceptions. This means you will get the opportunity to land even more winning combinations! But better yet, winning sequences with more than one Wild symbol will also offer you a multiplier for those wins. This will trigger the so-called Wild Multiplier feature. And as a result of it, landing 2 Wilds on a payline will multiply the payouts times 2. If you manage to land 3 Joker Wilds on an active payline, then that multiplier will increase to 5x! Ironically, though, there’s no multiplier for wins that involve Wild symbols only, or in other words, for lining up 4 Wilds on a payline. 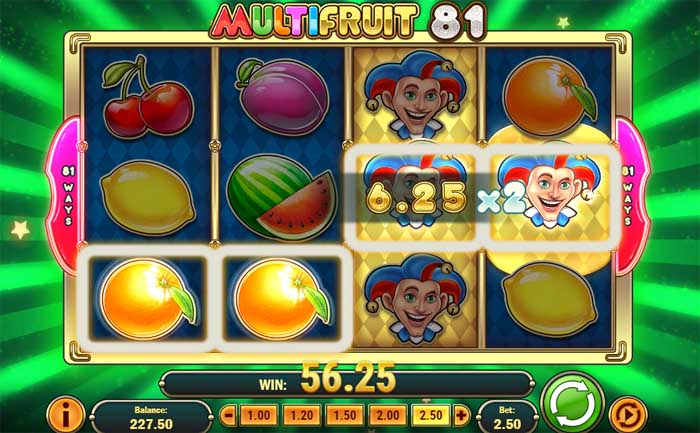 But there’s more than just that. The Wild also happens to come with yet another feature – Expanding Wilds. For each spin that you play in this online slot game, one reel will randomly be chosen and highlighted. Keep an eye on that reel, because if you manage to land a Joker Wild icon on it, it will expand, covering the whole reel. Naturally, this means that it will replace any of the symbols on that reel. So that’s certainly a very neat touch on behalf of the developers. And provided that classic slot games rarely even have Wilds, it really is a treat to have 2 features attached to it. 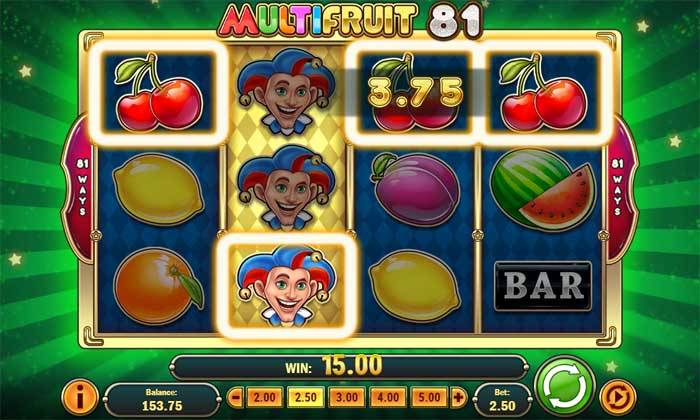 However, this about covers it, as far as the special features in Multifruit 81 go. You will notice that since there are no exceptions as to the symbols that Joker Wild can replace, there are also no other special symbols. In other words, this means there are no Scatters, no Bonus symbols or similar. So, this will without a doubt not appeal to some players. But that’s what diversity is for – to each his own, as the saying goes. On the other hand, though, there are very large prizes to be scored here, so there’s also that to consider.

Multifruit 81 is a really cool online slot game. The graphics and accompanying soundtrack are great and create a fun atmosphere already from the start. But don’t let that fool you for an instant. This is a highly volatile title that can really take a bite out of your bankroll. Gameplay is fairly simple, as the genre would imply. And it’s still certainly nice to have those extra features in the game. Those are actually the ones that can potentially award you the really big wins. As a matter of fact, a single spin in this slot game can potentially reward you with a whopping 2,520 times your total stake!