Terminator 2 is an online slot game by software manufacturer Microgaming that centers on the cult Arnold Schwarzenegger film of the same name. And clearly the developers have tried to stay as true to the movie as possible. As a matter of fact, some of its main characters are present on the reels, just as they look on the big screen. Obviously, in accordance with the theme, the design is strictly mechanical. There are wires and bolts, and levers and tons of other mechanisms crowding the backdrop of this slot. And it will be hard to miss the epic soundtrack in the background – just like in the movie. Oh and did we mention the superb graphics quality? Yes, well, now we did. On top of that, you will also get to enjoy scenes from the actual motion picture during gameplay. All in all, the title boasts outstanding visuals and really recreates the vibe of the iconic film, so just sit back and watch Arnold do his thing. 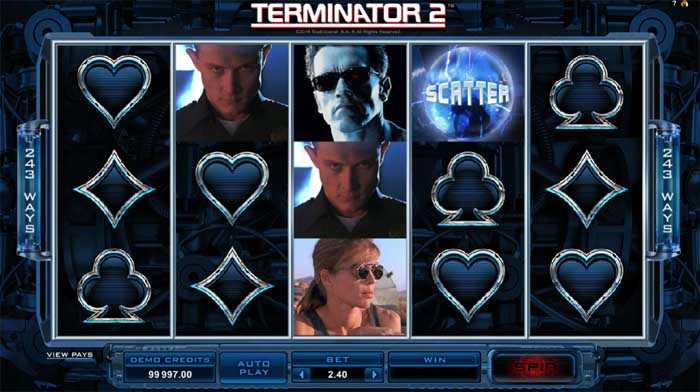 The symbols in this online slot game include the lower value playing card suits. Only they don’t quite resemble those you see in most other slots. These specifically match the theme of killer robots and high-tech hitmen. The symbols in question are clubs and diamonds. And with an increase in value we have the spades and hearts. This then brings us over to the higher value character symbols, where first in line is the T-800 in his pure robotic form. Moving on, we have Sarah Connor and the T-1000 aka the villain. Finally, there is John Connor and the Terminator himself, wearing his hallmark sunglasses. As for the layout, there are 5 reels and 3 rows with 243 up to 1024 ways to win. Needless to say, the paylines are fixed. And stakes have a rather comfortable range of between 30p per spin and £30 per single spin. In addition to that, you can also expect a very decent RTP of 96.6%.

The T2 logo symbol acts as the game’s Wild and it will also be the one to from time to time entertain you with some great action scenes from the movie. But in addition to that, you can expect to land the Wild in any position, anywhere on the reels. Furthermore, it’s also the second most lucrative symbol available with payouts reaching up to 40 times your stake. And of course, since this is a Wild, it will be able to replace any of the other symbols to help create winning combos. However, it will not be able to substitute for the game’s Scatter and for T-1000 in the freespins round.

Before we introduce the other special symbol, let’s also mention a random feature called the T-800 Vision. It can take place at any point during the base game and only during the base game. And when it does, you will find yourself looking through the eyes of the Terminator and the screen will turn red. If you happen to land even a single Scatter symbol during this feature, you will trigger the bonus round. In addition to that, you will also receive a cash prize for landing any of the character symbols during the T-800 Vision. So be on the lookout for any of these.

As for any other time during gameplay, you will need to land at least 3 Scatter symbols to trigger the freespins round. Speaking of which, the Scatter can land in any position on the screen. And it’s also the highest paying icon in all of Terminator 2, with prizes reaching up to 100 times your stake.

Once you trigger the freespins bonus feature, you will receive a total of 10 freespins. Furthermore, the number of ways to win will sky rocket from 243 to a whopping 1024. During this feature you will really want to keep an eye out for the evil T-1000 symbol. You remember how he used to be able to easily morph and change shape? Well, he kind of does the same here, only it will be to your benefit. The T-1000 will be able to transform into any of the character symbols in order to award the highest possible wins. The only downside to this freespins bonus, though, is that it cannot be retriggered.

One last feature is Terminator 2 is the “hot mode”. This is an extremely rare feature, but when you do get it, it will almost certainly be very rewarding. The hot mode is basically a special version of the free spins feature, where every spin is going to be a big win. It can trigger randomly when you get the free spins and you will notice that there will be flames around the letters. Another way to see that you have got the hot mode free spins is that the background has a orange glare to it, instead of the regular steel blue colours. As mentioned, the hot mode will trigger at random, and is very hard to get, but when you do get it, it’s going to pay. 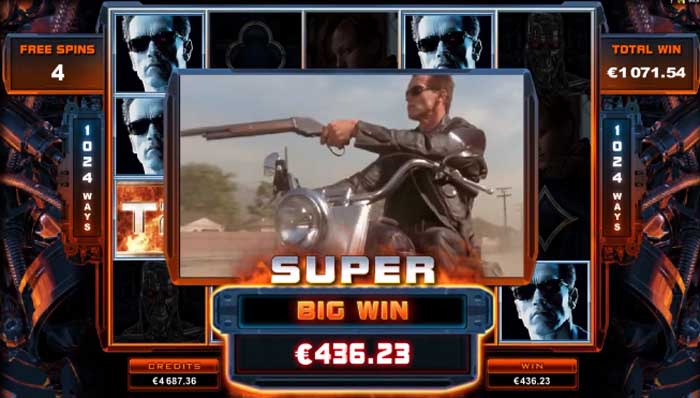 Terminator 2 is a fantastic online slot game. Not only does it provide you with exceptional visuals, but it also merges gameplay with actual aspects from the movie, making it exceptionally entertaining. Besides that, the features here can also prove to be pretty rewarding, which is no less important. As a matter of fact, the freespins round can be exceptionally lucrative. With its help, players can potentially pocket up to an impressive 2,950 times their total bet. So with that in mind, it’s also no wonder that you can’t retrigger it. And be sure to keep an eye out for the Terminator 2 hot mode…