The Legend of Shangri-La Slot

The Legend of Shangri-La slot review

The Legend of Shangri-La is an online slot game by casino games developer Netent. It focuses on the mystical land of Shangri-La, said to be located high up in the Himalayas and be a kind of paradise on Earth. Shangri-La is actually a fictional place that the Western world became familiar with thanks to a novel by British author James Hilton. It’s really based on the mythical kingdom of Tibetan and Buddhist traditions Shambhala. Either way, typically for Netent, this title transports you to a world of its own. It features superb graphics and truly intriguing characters accompanying you all throughout gameplay. The backdrop depicts a blissful land of waterfalls and blossoming trees. There’s also a very peaceful Asian soundtrack to help enhance the overall Zen atmosphere. We also really like the stunning design of the reels and the dragon pole frame around them. 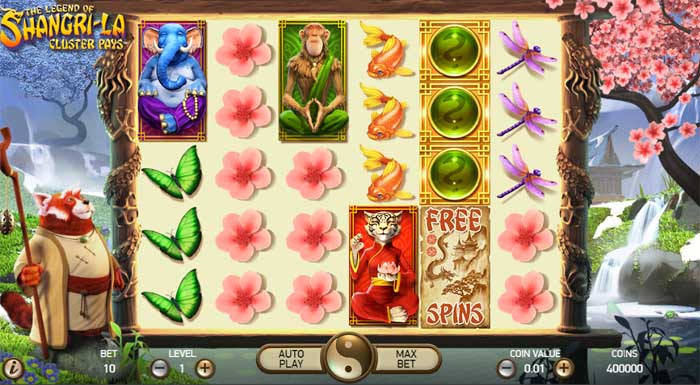 But the symbols on these reels are also a real treat to look at. The developers have escaped having to use any conventional symbols, such as playing cards. Instead, the lower value icons in this title four exquisite representatives of the local flora and fauns. First off is the orange Koi fish, following which is the purple dragon fly. Next is a brilliant bright green butterfly and finally – a pink cherry blossom. This brings us over to the higher value icons – the guru symbols. These are also from the animal kingdom, but you can tell they’ve evolved even beyond most humans. First is the Monkey Guru, after which offering the same payouts is the Elephant Guru. And last but not least is the most lucrative symbol on these reels – the Snow Leopard Guru. Note also that they can take up to 2 positions on the reels. As for the layout here, it’s rather unusual, featuring 6 reels and 5 rows. Payouts here form in clusters, so there are no paylines. In other words, to win you will need to align symbols of the same type horizontally or vertically adjacent to each other. Bets in this title span from 10p per spin and up to a total of £200 per spin. The Legend of Shangri-La has a fairly decent RTP of 96.59%.

The Legend of Shangri-La special features

The Legend of Shangri-La actually comes with an array of special features. Instead of your typical Wild, the game boasts a Substitution symbol in the form of a green stone. When it lands, it will transform into the adjacent symbol that will create the highest possible winning sequence in a cluster. It can appear in any positon on the reels. But the only symbol it will not be able to transform into is the Freespins symbol. In addition, however, the Substitution symbol can also take part in the Random Substitutions feature. This feature can randomly become active at any point during gameplay. The only condition is that there are at least 2 clusters of the same symbol on the reels. Then the Red Panda Master standing beside the reels will add at least 1 Substitution symbol to the screen.

Another feature this title boasts is the Sticky Respins feature. It takes place whenever you land 2 non-winning clusters of the same symbol during a spin. As a result, these symbols will remain in place and trigger a respin. So, all other positions will spin independently. If as a result you land more symbols of this same type, those will also stick to reels and a subsequent respin will take place. This can keep going until no more symbols of the same type land on the reels. 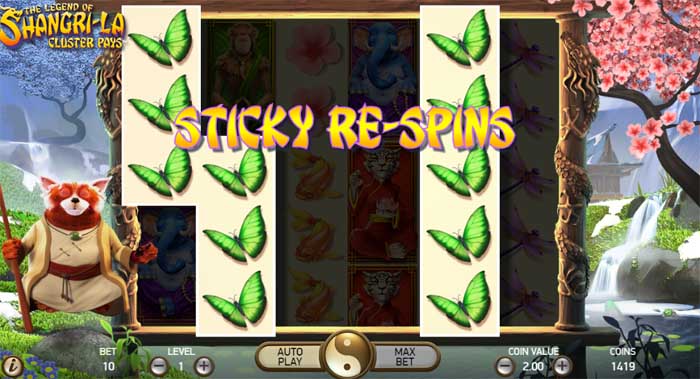 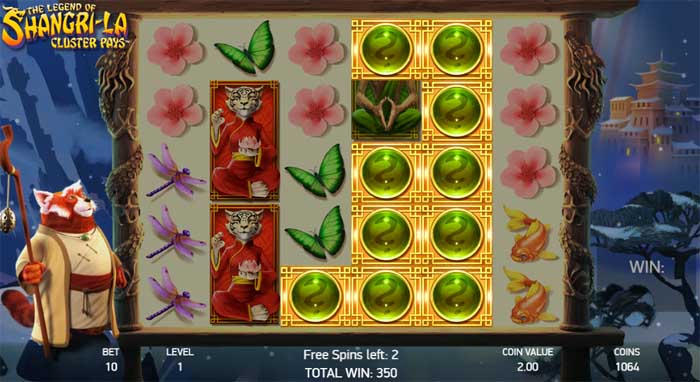 The Legend of Shangri-La summary

The Legend of Shangri-La is a great medium variance slot from NetEnt with plenty of features to entertain you. In addition to that, the visuals here and the overall vibe of the game are perfect. There’s a unique atmosphere with cool characters and fun animated sequences here and there. Potentially, prizes here can reach up to 1,000 times your total stake per spin. And, naturally, the freespins can prove to be the most lucrative part of the game. Of course, that would be also in combination with the Substitution symbol. All in all, it’s certainly a very worthy offering in the best of Netent’s traditions.