Wild Play Superbet is an online slot game by game developer Nextgen Gaming. The theme centers on that classic feel, with the traditional fruit symbols and other icons you may recognize from old school slot machines. But it is certainly also much, much more than just that. It has a really sophisticated, futuristic vibe to it. To begin with, the graphics are of impressively high quality, so it’s just a treat to look at. There are these really fine, almost laser-like barriers separating the transparent reels. And most of the symbols look almost as though they were holograms of themselves. In addition to all that, there’s also the really groovy, dynamic soundtrack playing that makes it feel like you’re in a sci-fi movie. And you certainly don’t get that in too many of the classic themed online slot games. 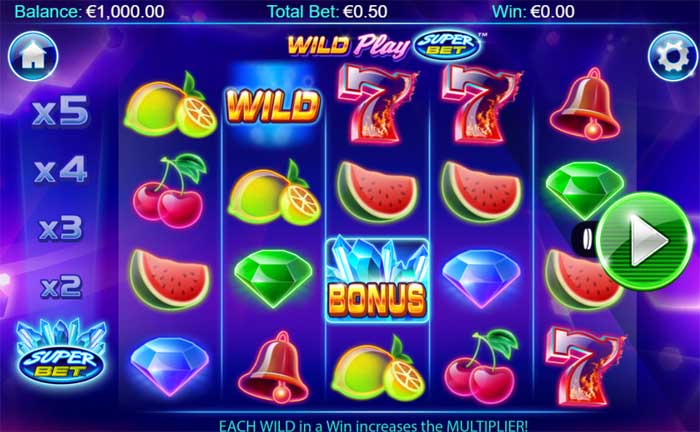 Now let’s have a closer look at the game’s symbols here. As we already pointed out, they include the traditional, vintage fruit icons. In this case they are the lower value cherries and lemons. Then there’s a slight increase in payouts for the juicy watermelon icon. Following these, there’s a holographic bell symbol, which is fairly typical for the genre. And then we have the slightly less common icons of a green and blue diamonds. Then, last but by no means least, is the lucky 7 symbol. Here it’s predominantly transparent, apart from the blazing fire at its foot. And that just about covers the regular symbols. Moving on to the layout, things aren’t very classical here either. In fact, it’s unusual even for most contemporary slot games. The layout features 5 reels and 4 rows with a total of 40 paylines. The paylines here, however, are not subject to adjustment, so you won’t be able to play with a lesser number. And stakes in Wild Play Superbet are rather steep. The betting range here is from 50p per spin up to the maximum of £25 per spin. The RTP of this slot is pretty alright, though, ranging from 95.66% to 97.46%.

Unlike what you might now classic slots to be like, this one actually boasts a Wild symbol. And not only that, but the Wild also comes with its special surprise. First of all, it can of course replace any of the other symbols to help create winning combinations. But aside from that, it will in some cases also be able to multiply the payouts for any winning combination that it takes part in.

This is actually part of the Superbet feature this slot game boasts. It’s an additional wager option, which you can use to increase your Wild wins. There are five different levels, depending on your stake amount. Level 0 will not offer you a multiplier, but from then on you can count a multiplier from 2x to 5x. And if there is more than just one Wild in a winning sequence, those multiplier values will add up. So for 2 Wilds, you will get a 10x multiplier, and for 3 – it will be 15x, etc. Note, however, that the Wild can only land on the middle three reels 2, 3 and 4. And it also won’t be able to substitute for the game’s Scatter symbol. Furthermore, the Wild can also appear in stacks, so that increases your potential winning opportunities even more. 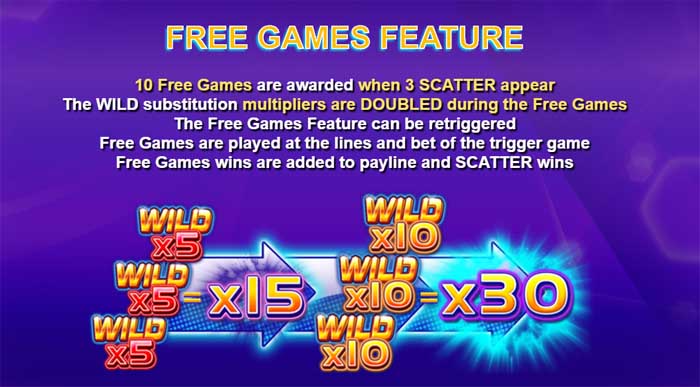 Now, as for the Scatter, it depicts several blue crystals and the word ‘Bonus’. This symbol can land in any position, anywhere on the reels. But in order for you to actually benefit from it, you will be looking to land 3 of these simultaneously during the same spin. As a result, you will be triggering this slot’s freespins bonus round. And once the feature is active, you will receive a total of 10 freespins. But that’s not all. On top of that, you will also get to enjoy a double Wild multiplier, meaning that all throughout the freespins feature, each Wild symbol in a combination will multiply the payouts x10. And just like in the base game, multiple Wilds in a combination will have their multipliers combined. And you can even retrigger the freespins feature by landing another 3 Scatters. This will award you an extra 10 freespins.

Wild Play Superbet is a fun online slot game, no doubt. It puts an innovative twist on a classic theme, which is always welcome. But besides that the setup also has plenty in store for players. You have the Superbet feature on the one hand, along with stacked Wilds and freespins to top that off. In addition, you can also count on some pretty great winnings, especially if you play with a somewhat higher stake. With that in mind, this puts the slot somewhere in the medium to high variance range. So, don’t expect to trigger the bonus round too easily, but you can be sure that it will be pretty rewarding.