Are you ready for some funky, odd, button-stitched and patched-up weirdness? Then you will feel very welcome in Wonky Wabbits by software developer Netent. This online slot game features a very different, but unique and fun theme. It’s kind of like Tim Burton was asked to help out with the design here and there. The entirety of the backdrop, reels and symbols is put together with the help of different colored pieces of cloth. You can quite clearly see the stitches that hold these pieces together and even the ‘wonky’ rabbits that pop up every now and then appear to be these Frankenstein-like creatures. Adding to that image is also the uneasy sounds of the rabbits giggling from time to time. And all of this happens to also have a very lively, jolly soundtrack. Why not, right? 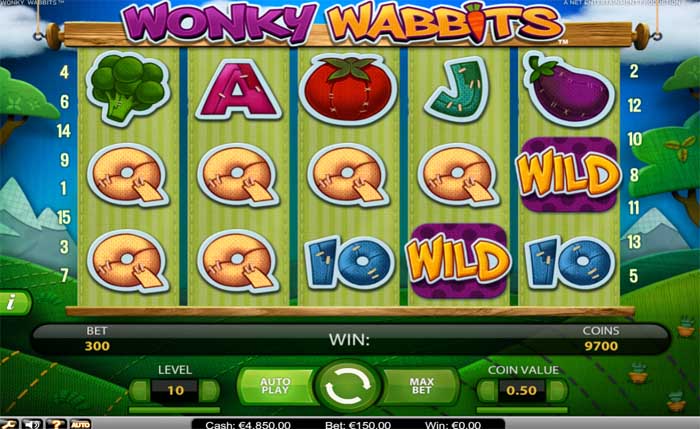 Moving on to the stitched up symbols, first in line are the lower value symbols. These are A, K, Q, J and 10. Traditionally, each comes in a seperate color, ranging from blue and forest green to magenta. Following them we have a number of vegetables that are the higher value symbols in this title. First is the plump eggplant, following which is a curly broccoli. Then there’s a corn cob symbol, after which we have the tomato. And finally, immensely more lucrative than the rest is the carrot symbol. As far as the layout in Wonky Wabbits goes, you will see the familiar 5 reel by 3 row grid that is in most other online slots. There are 15 paylines in total, whereas these are fixed and therefore not subject to adjustment. The stakes, however, may come across as rather steep with this in mind. Wager amounts here span from a minimum of 30p per spin and up to a total of £150 per single spin. The RTP is pretty decent, though, at an average of 96.5%.

First of all, in this game you should be on the lookout for the Wild symbol. It’s purple and yellow in color and just as funky-looking as the rest of them. More importantly, though, it can appear in any position, anywhere on the reels, at any point during gameplay. In addition to that, its Wildly duty implies that it replace any of the other icons. And in that way, the Wild symbol will essentially be contributing to better winning combos and higher prizes. Note, however, that the Wild doesn’t offer any payouts of its own. Instead, it comes with a number of other different extras that may prove even more attractive. And as a matter of fact, the Wild happens to be this slot’s crown jewel, really. Most of the action here revolves around none other than this one special symbol, and here is what we mean by that.

For one, it comes with a Wild Duplication feature. This is a really useful little thing, because any time you land a Wild symbol, it will duplicate to the position on the reels, where it will be able to make the highest paying combo. In addition to that, you will notice that on reels 2 and 4, Wilds can appear in stacks. So, potentially, if you land two full stacks of Wilds on both those reels, you can end up with up to 14 Wilds in total. Picture how lucrative that can prove to be.

However, note that these are the only special features that Wonky Wabbits boasts. There is no Scatter or Bonus symbol, so there are also no exceptions as to the symbols that the Wild can substitute for. But that also implies that there are no traditional bonus rounds, at least not in the conventional sense. There will be no freespins, no pick me games, and no multipliers even. In addition, Wonky Wabbits really has nothing to offer players, as far as interactivity goes. So this may or may not appeal to certain players as it’s all just a matter of preference. But at the end of the day, the Wild Duplication and stacked Wilds here do prove rather rewarding and bring something different to the table than what most other titles have in store. 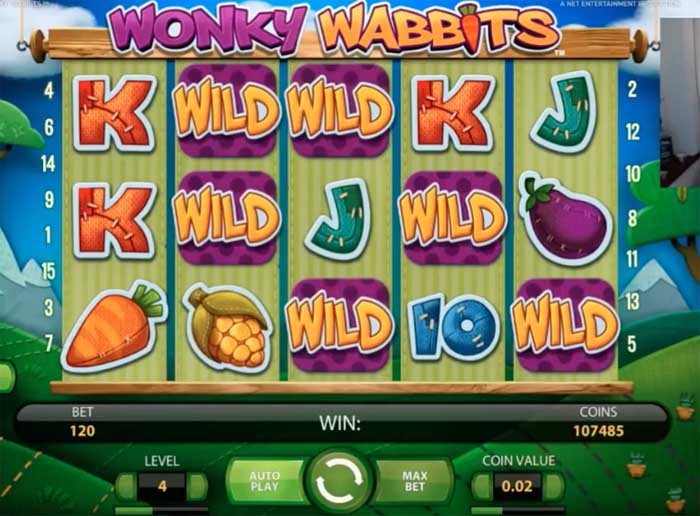 Wonky Wabbits delivers great visuals that aren’t like what you see most everywhere else. It’s a fun theme, with a unique setup that is to a certain degree also kind of typical of Netent. You have the special feature as an integral part of the base game. So, there’s no clean separation of where the base game ends and the bonus round begins. This is what may put some players off, as it’s… well, different. It’s a different approach, but sometimes we need something new to freshen up the scene. And there are also the quirky rabbits to entertain you, so don’t forget about those.