The History of the Slot Machine 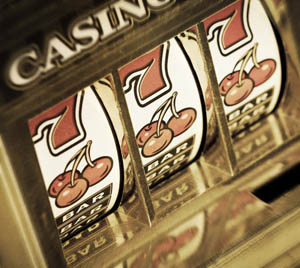 Believe it or not, slot machines have been around for more than 120 years! While their form and style has changed significantly over time, their general theme has been the same since the late 1800s.

The first ever origins of the slot machine date back more than a century to 1891. In Brooklyn, New York, two businessmen devised a game where five drums held 50 playing cards in the style of poker, and players won a specific prize for picking up a strong hand.

This game became popular in pubs and bars, with prizes such as free beer, cigars and chips on offer. The operators of this machine soon realised they could get a ‘house edge’ by removing certain cards from the drums, and it is thought that this is where the term originated from.

It was around this time that Charles Fey developed the ‘Liberty Bell’, the first slot machine to feature an automated payment mechanism. This was the world’s first three reel slot that featured many of the symbols we know and love today: cherries, melons, bananas, BAR and more.

The development of automatic payments from winning spins was industry-defining; and was the founding point for slot machines as we know them today.

It wasn’t until 1963 that the first electronic slot machine made its bow. This was developed by Bally Technologies and was called Money Honey, and it offered a top prize of 500 coins that did not have to be administered by an attendant. So for the first time, fully automated slot machines were available – and this would signal the start of their implementation in land-based casinos across the globe. The mechanised side lever would become a thing of the past….

The first video slot machine, Fortune Coin, soon followed in 1975, and while it represented a huge technological leap forward for the industry players were at first unsure whether they could ‘trust’ the machine not to be ‘rigged’. But with further marketing and development from IGT it wasn’t long before video slots were a key part of the land-based casino’s cache of machines.

The 1980s brought many things to the world and one of these was programmable microchips being added to slot machines. This enabled different slot games to be linked across multiple locations….and thus the Progressive Jackpot was born.

The first progressive slot game was Megabucks, and this found its way into casinos in 1986. Even back then, jackpots in excess of $3 million were regularly being won!

The introduction of the slot machine bonus feature

The technological advancements of the 1990s saw mobile phones become more commonplace amongst the ‘common man’, the internet become widely available for the first time and even average-priced computers significantly improving their speed and capability.

And slot machines progressed as well with ‘second screen’ bonus rounds and special features introduced. This secondary chance to win a prize was first witnessed in Reel ‘Em In back in 1996, and has become commonplace amongst newly-developed slot games.

This leads us up to today, where online casinos of all shapes and sizes offer a variety of slot games and styles. Initially, online casinos had a strict regulatory framework to abide by, but as of 2016 things are much more relaxed in many jurisdictions.

The prizes on offer in today’s slot gaming are off the chart, and after those humble beginnings more than a century ago the industry continues to go from strength to strength. Just recently a young man ended up $38.7 million richer for a $3 wager….so what are you waiting for?