7 Monkeys is about as descriptive a slot name as you can get. This online slot by game developing studios Pragmatic Play centers on 7 different apes. The slot is pretty funky looking and the monkeys themselves look fairly amusing. They are all in round shapes, with a face in the middle and a brightly colored mane surrounding them. The color of the mane, as well as their expressions is what sets them apart from each other. First is the grumpy pink monkey and following it is the orange bored monkey, the surprised blue, confused green and happy yellow monkeys. The graphics are rather satisfying and will even surprise you with some unexpected animated features.

The game features a total of 7 paylines on a layout of 5 reels and 3 rows, meaning you can start betting with a minimum of 7p per spin. Considering the relatively low number of paylines, the maximum stakes don’t go up too high, leaving us with a limit of £35 per spin. The RTP isn’t high at all either – 92.71%.

The Wild symbol is the most flamboyant of the lot, featuring a ferocious baboon. It can replace any of the other monkeys of the reels, however it is powerless against the Bananas – they are the game’s Scatter symbol.

The Scatter can appear in any position on the reels, so be sure to look out for it. You will be looking to land anywhere from 3 to five Scatters on the reels at the same time. This will trigger the 7 Monkeys freespins feature. Depending on the number of Scatters you landed that activated the feature, you can count on different rewards. 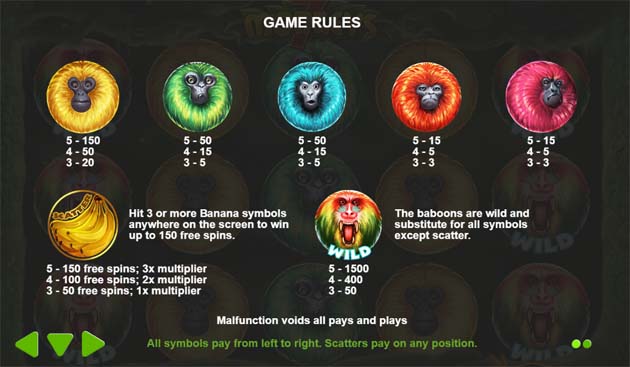 All in all, 7 Monkeys is a decent looking game with pretty straightforward gameplay and great graphics. However, it doesn’t allow for much of a betting range, which some might consider a downside. The RTP is also so low that we would advise our readers to keep the play on this slot to a minimum.