Beowulf is a slot game by Pragmatic Play. Now while this may not the biggest game provider out there, the developers have managed to achieve a rather impressive slot machine, with engaging gameplay and high-quality graphics. As the name would suggest, this slot follows the main character from the Old English epic of the same name. Beowulf was a warrior and a hero, who defeated monsters and dragons. The reels feature the basic playing suits. Furthermore, there’s an emerald ring, a golden cornucopia and a Viking ship. Other symbols include depictions of other characters Hrothgar, his daughter and the hero himself.

The game has a layout of 5 reels and 4 rows. There are 40 paylines in total, which cannot be adjusted. You can, however, the set coin value to suit your preferences. Betting amounts range from 40p up to £200 per spin. As for the RTP, it is estimated to be 96.5%.

The highest paying symbol in this game – Beowulf – pays out from left to right, as well as from right to left. The game also features a Wild symbol that can substitute for any of the rest of symbols. However, it cannot do the same for the Scatter, which is the one you really want to watch out for.

The Scatter symbol in this game is a beautiful round, red shield with stunning gold embellishments. There are two swords sticking out from behind it. The Scatter can land anywhere on the reels, but to trigger this game’s special feature, you’ll need at least three. Furthermore, depending on the exact number of Scatters that you land, the bonus will differ. 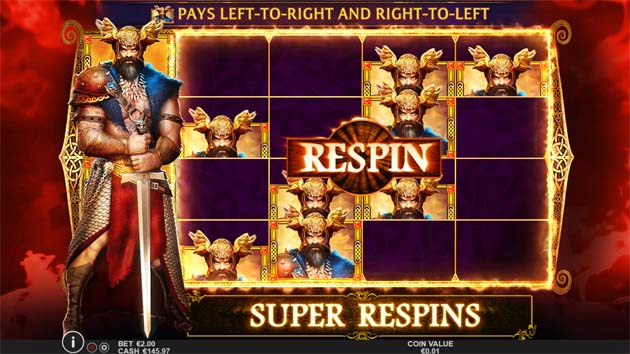 In addition, as during the base game, you can also activate the Super Respin feature. You will be looking to land 4 stacked Beowulf symbols on the first reel. This feature will bring about a new set of reels that contain only empty spaces and Beowulf symbols. First you get 3 respins, during which all Beowulf symbols you land will remain in place. Every time you land a new Beowulf symbol, you will receive an additional respin. Here, the end goal would be to fill the reels with Beowulf symbols. This will secure massive payouts of 100,000 times the bet per line!

Beowulf is a really nice slot, both visually and otherwise. Obviously, the greatest attraction is the crazy bonus feature with the exceptionally high winning possibilities.