Aztec Warrior Princess is an online slot game by software developer Play’n GO. This slot game quite obviously centers on the ancient Mesoamerican civilization of the Aztecs and is styled to mimic their sculptures and artwork. The visuals here are quite rewarding and the graphics are of impressively high quality. You will also find that there are some fairly entertaining animated sequences here and there. The backdrop basically depicts a stone slab, or a wall, with different traditional engravings. Some of them include the very characteristic serpent depictions, which you can see at the top of the screen. And every now and then you will see a beetle crawling up and down that same area. On either side of the reels the engravings mimic columns. And creeping vines have already started to take over them. In addition, there’s also a very thematic soundtrack to enhance the atmosphere.

Aztec Warrior Princess also includes a number of different interesting symbols on its reels. Even the lower value playing card icons have an appropriate design and fit in perfectly. They include A, K, Q, J and 10. Following them are a few wild animals, including the bright red with blue spots poison arrow frog. And after that there’s the bald eagle and jaguar – both looking very ferocious. And last but not least is the dragon-like creature, which is the most lucrative of these symbols. As for the layout here, it features 5 reels and 3 rows. The total number of available paylines in this slot is 20, but you are free to play with less, as well. You can just as easily control the coin value and the number of coins you would like to wager. This will leave you with an all in all betting range of 20p per spin up to £100 per single spin. And the RTP here is 96.08%.

Aside from the symbols we mentioned just now, this slot game also has its fair share of special symbols. First is the game’s Wild, which can appear in any position and replace any of the other symbols on these reels. It is by far the highest paying symbol in the game with payouts reaching up to a whopping 5,000 coins. It comes in the shape of a gold coin and the only symbols it will not be able to substitute for are the Bonus and Scatter symbols. 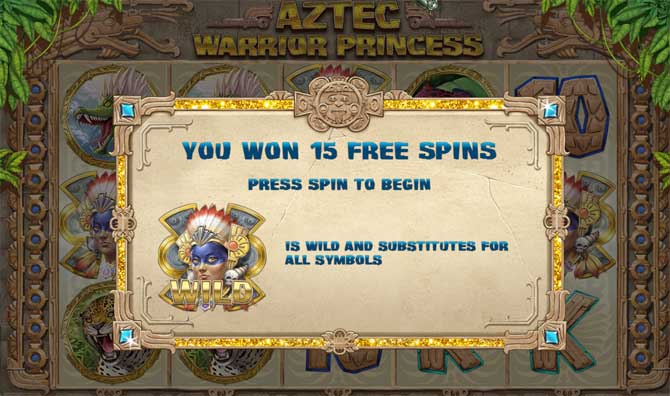 The Scatter symbol represents the Warrior Princess herself and she will be responsible for activating the freespins bonus feature. Just like the Wild, the Scatter can appear in any position on the reels. Only to be able to really benefit from her, you will need to land at least three of these Scatter symbols on the reels. As a result, you will trigger the freespins bonus round. This, in turn, will reward you with a random number of freespins. Usually they are around 15, so that’s a good estimate to count on. The downside, however, is that you won’t have a multiplier during the feature and you also won’t have the opportunity to retrigger it. However, the Scatter symbol will double as a Wild during this freespins round. This means you will be able to benefit from two Wild symbols at once, which can make for better wins. In addition, players can count on activating this feature fairly often for a medium variance slot game like this. 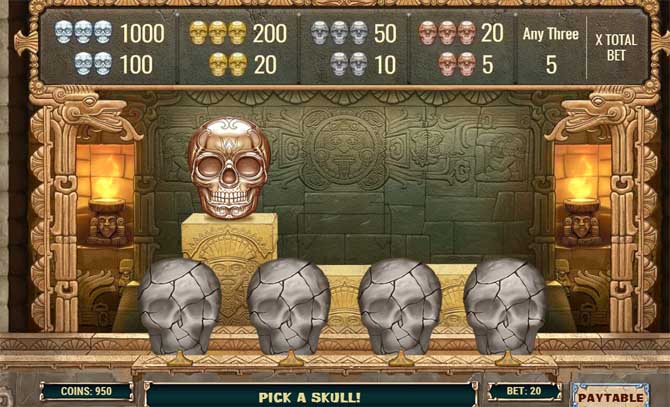 Last but not least, keep an eye out for the Crystal Skulls bonus symbol. Something out of lore and legend, there’s much mystery surrounding these crystal skulls. Here, however, things are a bit less mysterious, but just as exciting nonetheless. You will again need to land at least 3 Bonus symbols in order to activate the special feature – the Aztec Warrior Princess bonus game. It will present you with a simple pick me game, in which you will need to choose from a selection of crystal skulls. The skull you choose will award you a certain cash prize. In fact, if you’re lucky, you can potentially score the maximum of 1,000 times your total stake! And better yet, though you won’t be able to trigger this feature as frequently as the freespins bonus, it will still occur fairly often – especially considering the potential amounts you can win with it.

Aztec Warrior Princess certainly brings a lot to the table in terms of its high quality visuals, compelling design and attractive atmosphere. The features here, though pretty straightforward, are also very lucrative, which never hurts. However, we do think that the developers could have spiced them up a bit. We mean that more for the Crystal Skull pick me game, as it can be rewarding, but also equally boring at the same time.