Bier Haus is a noisy, merry and busy pub of an online slot game brought to you by software developer WMS. It’s specifically aiming for the German feel, as you can already tell from the title. But in addition to that, it also features big-busted blonde women and men with bushy moustaches all dressed in traditional Bavarian clothing. You can also catch an Oktoberfest vibe – it is, after all, only the largest beer festival in the world. As for the backdrop here and the overall design, you will enter a classic old pub with stone walls and hardwood tables. The sound in the background is mainly just voices of other people, talking, laughing and having a good time. And as for the graphics quality, we have to say that it’s pretty high quality. 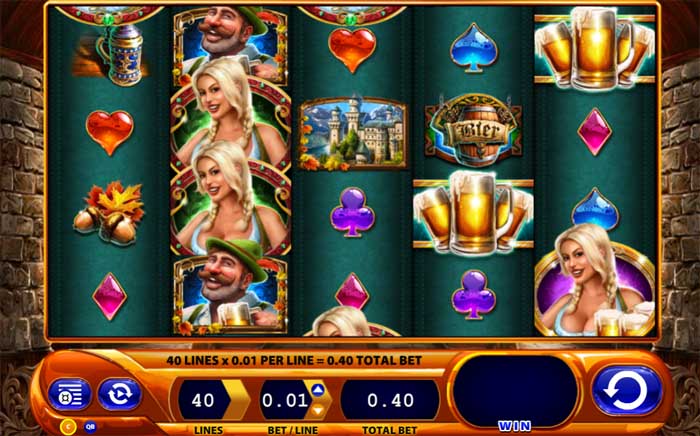 The symbols in Bier Haus mainly feature different thematic images, but they start off with the lower value playing card suits. They are traditionally in the form of different colored gems. And the symbols in question are diamonds, clubs, hearts and spades. Then the payouts increase for the mid and higher value symbols on these reels. And they start off with an icon depicting a pair of acorns and some autumn leaves. Next is an accordion – can’t have a good party without one. And after that we have a traditional stein. Moving on with a further increase in value, we have a beer barrel, following which is a picturesque German castle. And last but not least is the main holding his beer glass as the most lucrative symbol in this title. As far as the layout goes, it’s slightly larger than what most other slots have. It features 5 reels and 4 rows, with a total number of 40 available paylines. The paylines can be regulated and you can play with as few as only 5 paylines. With this in mind, the minimum bet you can make on these reels is 5p per spin. And the maximum amount you will be able to wager is £200 per single spin. The RTP of Bier Haus is 96%.

The beer symbol on these reels represents the game’s Wild icon. It can appear in any positon on the reels and replace any of the other symbols present. That way it can potentially contribute to better winning combinations, etc. It does not, however, offer any payouts of any kind. And it also doesn’t come with a multiplier. Furthermore, there are two exceptions as to the symbols that the Wild here can substitute for. One of them is the Feature symbol and the other is the Golden Feature symbol.

Both of the above special symbols depict a blonde woman, very generously demonstrating here assets. The only different between the two is the color of the background in the symbols. The Feature symbol has a green one, whereas the Golden Feature has a purple background. And the lady also has a bunch of beers with her. 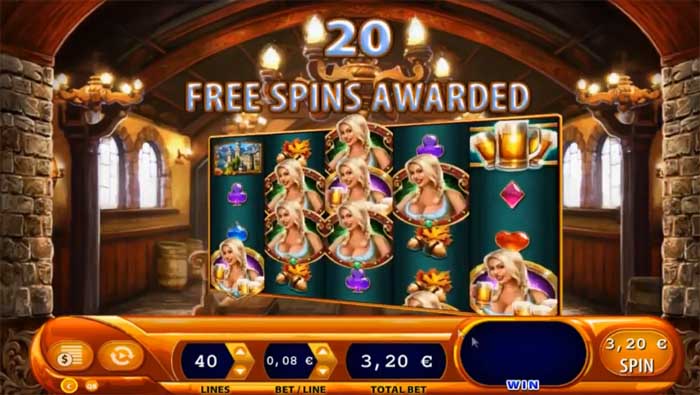 The one special feature that you will be aiming for in Bier Haus is the freespins bonus round. And in order for you to trigger it, you will be looking to land at least 5 of the regular Feature and/or the Golden Feature symbols on consecutive reels during the same spin. The symbols need to start from reel 1, though. Of course, the more of these special symbols you land, the better for you and the higher your reward will be. Once you have that down, you will activate the feature and receive an initial 5 freespins. But, for every Feature or Golden Feature symbol that you land on top of the minimum 5, you will receive another 5 rreespins on top.

All in all, you can potentially gain up to a pretty impressive 80 freespins already from the start of the bonus round. Better yet, you can also retrigger the feature the same way as you triggered it to begin with. The same rules apply, where for every special symbol on top you get another 5 extra freespins. Another thing about this feature is that the Golden Feature symbols that triggered the round will turn into Sticky Wilds for the remainder of the freespins. In other words, they will remain in place for the duration of the entire bonus feature. 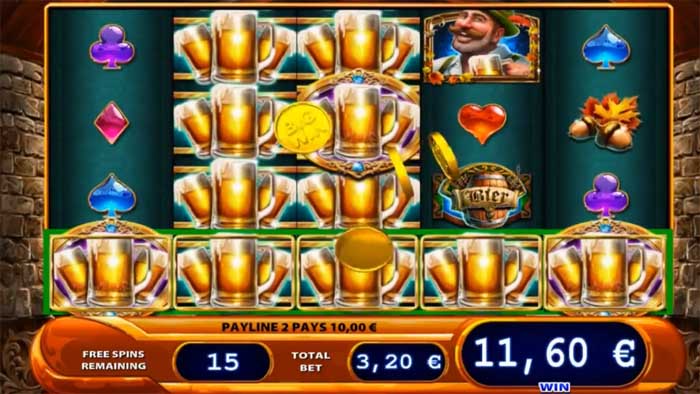 We would put Bier Haus in the medium to high variance range, meaning you can potentially get some pretty decent wins here. Naturally, the bigger prizes can come from the bonus round with those Sticky Wilds in place. However, triggering the bonus round may really try your patience. Therefore, be sure to pace your gameplay and be sure to keep an eye on your bankroll. Besides that, though, we really think Bier Haus is a worthy game to try. It has a fun theme and good visuals to support it.