Zeus 3 is a slot game brought to you by WMS. It’s an unusual title, as you will see from the very start, as soon as the game loads. It boasts an unconventional setup and layout, but we will cover that in more detail a little later on in this review. Besides that, another thing that really stands out about this title is the graphics quality. They are quite dated and lack a lot of the fanciness and flashiness you see in online slot games today. The backdrop here features a large mound of blue clouds, on top of which is the Parthenon. And behind the temple is the sun that we can’t see, but you can clearly make out its rays of light, shining from behind the cloud. There’s a pretty decent backing track that accompanies gameplay, too. But you can always mute it if you want. 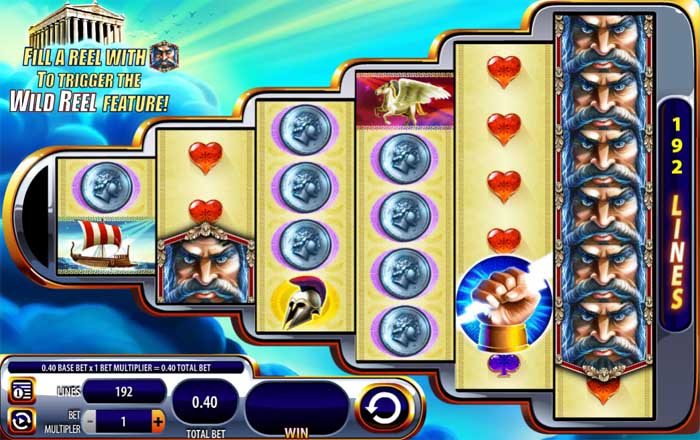 The symbols in Zeus 3 start off with the lower value playing card suit icons. Obviously, there are four of them and these are (in order of value ascension) hearts, clubs, diamonds and spades. They each look like a small gem and come in different colors. Then we have the thematic, higher value icons. First is an Ancient Greek silver coin, following which is an antique vase or amphora. After that we have a golden helmet and then there’s a slight increase in value for the ship symbol. Finally we have Pegasus – the mythical flying horse, and Zeus himself. Now let’s have a look at the atypical layout. It features 6 reels in total. The first, leftmost reel has 2 rows, and each consecutive reel adds another row. So the rightmost, sixth reel has 7 rows. All in all, there are 192 paylines and these are not subject to adjustment. The available betting range here starts at 40p per round and reaches a maximum of £120 per spin. And the average RTP is at about 96.1%.

Zeus 3 also has a Parthenon icon, which in this case represents the game’s Wild symbol. It can show up in any position, anywhere on the 6 reels. And more importantly, it will be able to substitute for any of the regular symbols on these reels. The one exception is the game’s Scatter symbol, which the Wild will not be able to replace. In addition, the Wild also doesn’t offer any payouts of its own. But it will be able to help out by potentially creating better winning opportunities throughout gameplay. 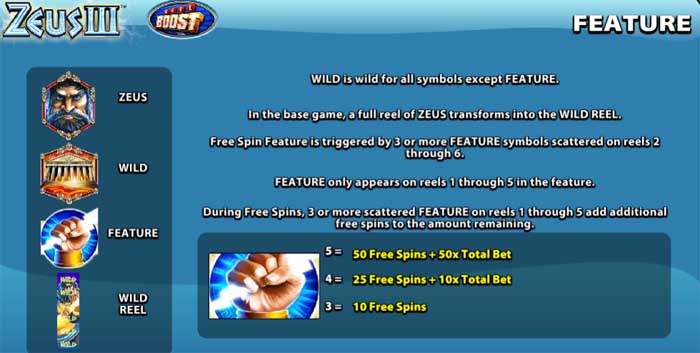 In a sense, the Wild comes with a special feature of its own, but it’s linked to another symbol. The symbol in question is Zeus – the most lucrative icon on these reels. If you land a full reel of Zeus symbols during a spin, that reel will turn fully Wild. Thus, it can create more winning combinations and secure higher wins.

In addition, this slot game also boasts a regular, good old freespins bonus round. And with it comes also the special symbol that will be able to activate it – the Scatter symbol. The Scatter pictures the hands of the mighty god Zeus holding a lightning bolt. Keep an eye out for it, as it can only appear on reels 2, 3, 4, 5 and 6. And in order for you to trigger the bonus round, you will be looking to land a minimum of 3 Scatter symbols at the same time. As a result, you will receive a number of freespins that corresponds to the number of Scatters you landed.

So, 3 Scatters will award you the minimum of 10 freespins. If you land 4 Scatter symbols during the same spin, you will receive a total of 25 freespins. And on top of that you will also get a cash prize equal to 10 times your total bet. Then last but not least, if you land 5 Scatters on the reels, you can count on the maximum of 50 freespins. In addition to those, you will also be awarded an amount of 50 times your total stake. Notice also that the reels will flip for the duration of the feature, whereas the Scatters will now only appear on reels 1 through 5. In addition, you can also retrigger the freespins by landing another 3 or more Scatter symbols. 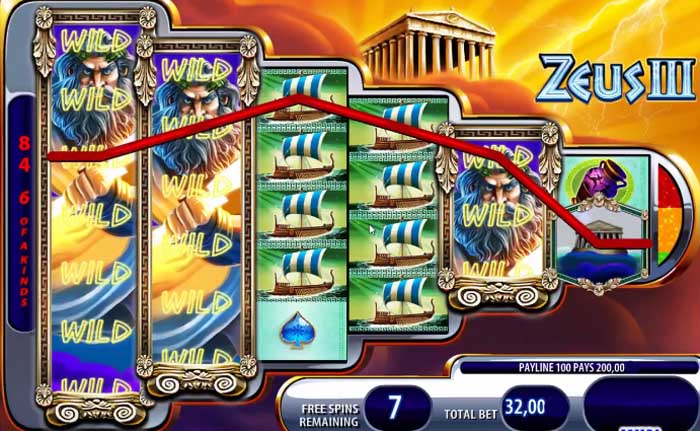 Zeus 3, despite not boasting the flashiest visuals and entertaining with elaborate animated sequences and such, is actually a pretty decent title. It offers a different layout and a pair of attractive features that can also prove quite rewarding. This is a high variance online slot game, so be sure to pace your bankroll. And obviously the bigger wins here will be coming from the freespins round. But be sure to be on the lookout for the Wild Reels, as that’s where the big prizes are at, too.