Blue Diamond is an old-school style online slot game by software developer Red Tiger. Things are very, very simplistic here and you don’t even get the benefit of three rows to go with your three reels. Instead, the layout and setup in this slot game are as basic as they get. It pays tribute to the vintage slot machines that paved the way for contemporary slots. In fact, the design even resembles a traditional one arm bandit. There’s a deep blue backdrop surrounding the reels and behind it is what we can only imagine to be a light bar going around the screen of the machine. The symbols here are also very minimal. There are only cherries, single, double and triple BAR symbols and the red lucky number 7. 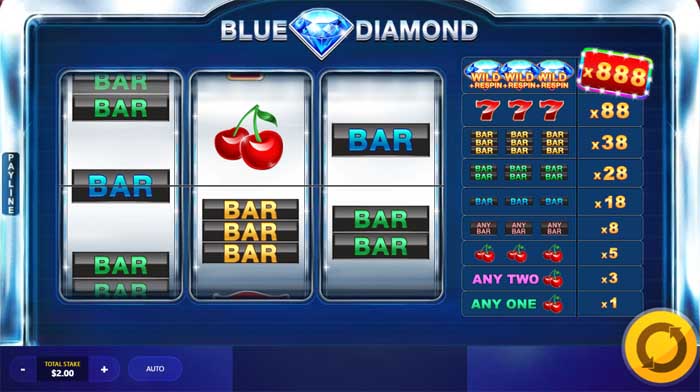 As we already made clear, there’s only one row for these three reels in Blue Diamond. This means that there is also only a single payline. What’s more, you will also be able to monitor the paytable just as you spin the reels. It will be constantly present on the right hand side of the reels. This slot features one special symbol, which we will describe in a little bit. But aside from that special symbol, the most lucrative on these reels is the lucky number 7. It can offer you payouts of up to 88 times your total stake! And with a betting range of between 20p per spin and £500 per spin, we’ll let you do the math. As for the RTP, it’s at a pleasant 96%.

The one special symbol that Blue Diamond has is the blue diamond symbol itself. It is wildly valuable and if you can land all three of these on the payline, you will receive a whopping 888 times your stake! In addition to that and contrary to what you might expect from a traditional slot game, it’s a Wild. Yes, the Blue Diamond symbol acts as the Wild on these reels. As such, it will be able to substitute for any of the other symbols here – no exceptions. 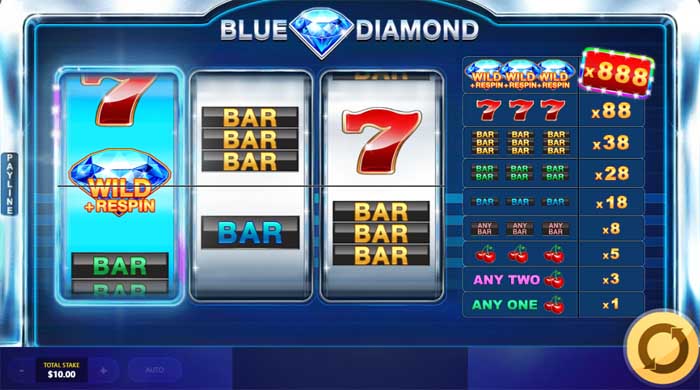 But that’s not all that it is capable of. Whenever it lands on the payline, the Blue Diamond will also freeze in place and will trigger a respin. And if you happen to land another Wild as a result, they will both remain in place for another respin. That way you will potentially have the chance of landing all three Blue Diamond Wilds on the payline. Hence, you will be able to score the jackpot of 888 times your total stake.

But that’s about as far as the special features go in this slot game. You won’t be able to trigger any freespins or activate a pick-me game. So the Wild is all you will be focusing on.

Despite this being an extremely basic slot game, the developers have still added a great touch with the Wild. Aside from being so lucrative, it also gives players a better chance of landing all three on the payline.