Red Phoenix Rising is an online slot game by casino software developer Red Tiger Gaming. If you have played other games by this provider before, you know to expect very high quality graphics. And Red Phoenix Rising will offer you precisely that. It’s a Chinese theme, which is beyond common with online slots, but it’s presented very nicely. The backdrop and even most of the symbols have a hand-painted feel to them, which makes for a very sophisticated appearance. As you will see, the frame of the reels is made up of large phoenix feathers and there’s a soothing Asian soundtrack in the background. The symbols here feature the lower value paying card icons A, K, Q, J, 10 and 9. And following them is a seed sprouting feathers, a tree, a feather and a baby phoenix. 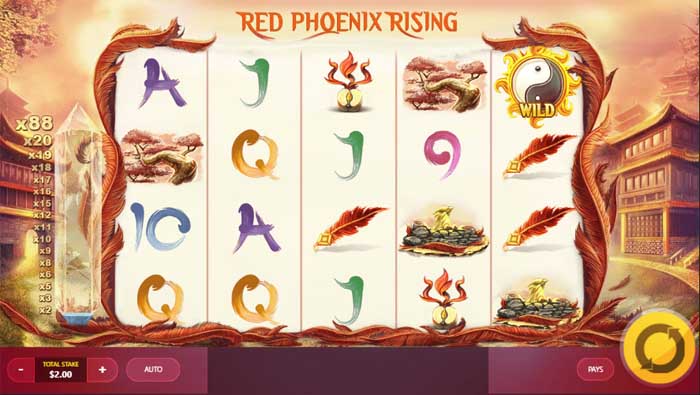 The layout here is only slightly unusual and features the regular 5 reels, only with 4 rows, instead of 3. In addition, there are 40 paylines here in total. However, they will not be subject to adjustment. The betting range, however, is fairly flexible and you can easily regulate it. Stakes here can span from only 20p per spin and up to a maximum of £500 per spin. And as for the RTP, you can count on an average of 95.99%.

The Yin Yang symbol here represents the game’s Wild. As such, it can replace any of the other symbols and thus help create better winning opportunities for you. In addition, it’s also far more lucrative than the rest of the symbols and can appear in any position on the screen. However, as is custom, the Wild cannot replace any of the Scatter or Bonus symbols. 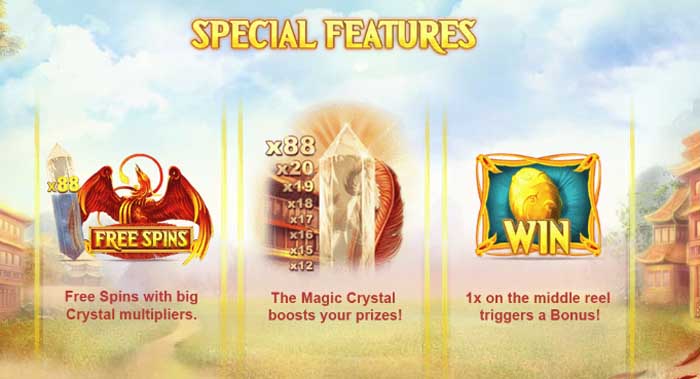 And one of those comes in the shape of a Golden Phoenix Egg – this is the Bonus symbol. And it can only land on the middle reel 3. But when it does, it will trigger the Bonus feature, awarding you a certain prize. Notice also that on the left hand side of the reels, there’s a tall Magic Crystal. The Magic Crystal will offer you a multiplier of anything from 2x up to 88x! It can rise at random throughout gameplay and increase your winnings.

Last but not least, keep an eye out for the Phoenix symbol itself, as it is the game’s Scatter symbol. Like the Wild, it can also land anywhere on the reels. Only to benefit from it, you will need to land at least 3 of these during the same spin. This, in turn, will trigger the freespins bonus feature, awarding you a random number of feespins. Furthermore, each winning spin will see the multiplier value in the Magic Crystal rise! And better yet, you can also retrigger the freespins feature by landing another 3 or more Scatters.

Red Phoenix Rising is a high variance slot game with a couple of fairly rewarding features. However, don’t think that triggering them will be easy.