Creature from the Black Lagoon

Creature from the Black Lagoon is an online slot brought to you by Netent. You may recognize the title from the 1950’s iconic monster horror movie. And even if you haven’t seen the original film, hundreds of pop culture references will surely have made you aware of it. Anyway, as far as the slot game goes, we really enjoy the design. It has a distinct 1950’s vibe, with the graphics having that aged effect and the soundtrack taking you back to the original film. These are really stunning visuals, we’ll just say that. The backdrop depicts the mysterious black lagoon, with plenty of vegetation growing around it. So you’re basically looking out to it from amidst bushy tree branches, which is pretty cool. 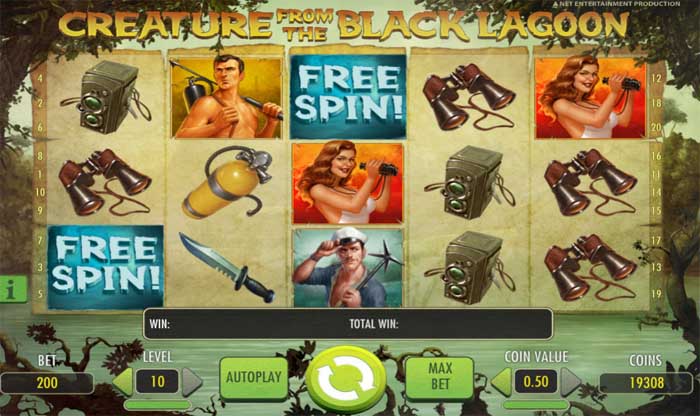 As for the icons on this slot, there are none of the boring playing cards or other generic imagery. Instead, the lower value icons here are all part of the characters’ inventory, such as the large hunting knife. Following it we have a vintage film camera, and an increase in value leads us to the diving tank and binoculars. Then there are 4 higher value symbols – all characters from the movie. First is Lucas, following whom we have Carl, who’s holding his camcorder in awe. Then the value rises even further for David. And finally we reach Kay, who is holding the binoculars. She is also the highest value icon, offering wins up to 750 times your line stake. The layout in Creature from the Black Lagoon features your common 5 reels and 3 rows. Besides that there are 20 paylines here in total. However, these are fixed and you won’t be able to regulate them. You will have plenty of freedom with the stakes, though. Betting amounts here range from 20p per round up to £100 per game. In addition, this title also boasts a fairly decent average RTP of 96.5%.

One of the peculiarities of this tremendous online slot game is the Wild symbol. First of all, it’s not just one Wild. And second of all, the different Wilds can actually just appear randomly all throughout gameplay anywhere on the reels. They don’t offer any payouts of their own, mind you. In addition, all three of the slot’s Wilds can replace any of the regular symbols and contribute to the highest paying combinations on a given payline. There are exceptions as to those symbols, however. Sticky wilds will not be able to substitute for either the Freespins symbol or the Target symbol. Another thing we should point out here is that whenever you land a Wild symbol during a spin, it will trigger a respin, whilst remaining on the reels itself for that one respin. Landing another Wild as a result of that respin will trigger a subsequent one, and so on until no more Wilds land on the screen. 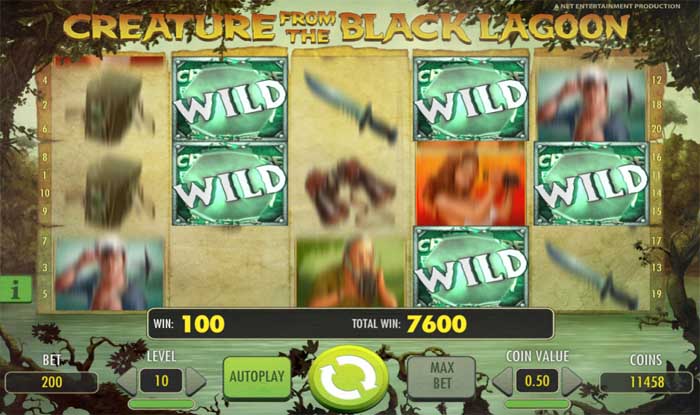 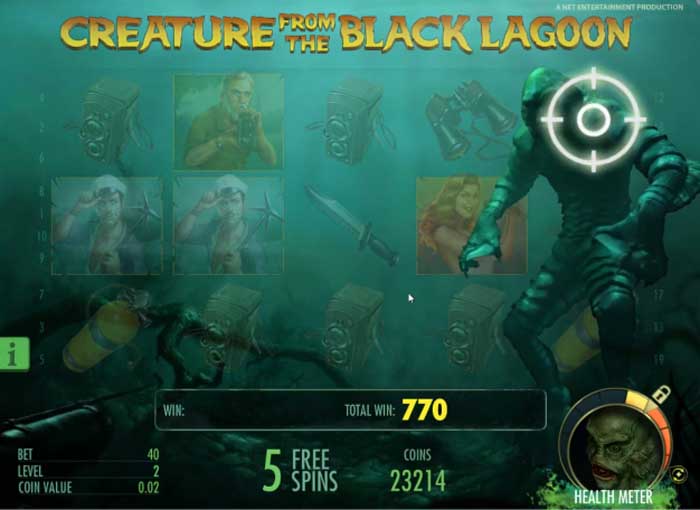 During this bonus round, you can land a Target symbol on reel 5. And if you happen to ‘hit’ the creature with that Target symbol, you will see the health meter below the reels show its health diminish. This meter has a total of 4 different levels, each coming with additional benefits. For example, landing up to 2 Target symbols in level 1 will result in any Wild symbols turning sticky for 1 respin. Reaching level 2 with 3-5 Target symbols, you will activate the second Wild symbol – the spreading Wild. When it lands, it will spread one position to the left and remain on the screen for the subsequent respin. Then, at level 3 you will activate the third and final Wild symbol, which is also a spreading Wild. Only this one spreads one position both to the left and to the right. Likewise, it will also trigger a respin and remain sticky for its duration. And by collecting 9 target symbols (reaching level 4) you will receive an extra 10 freespins. 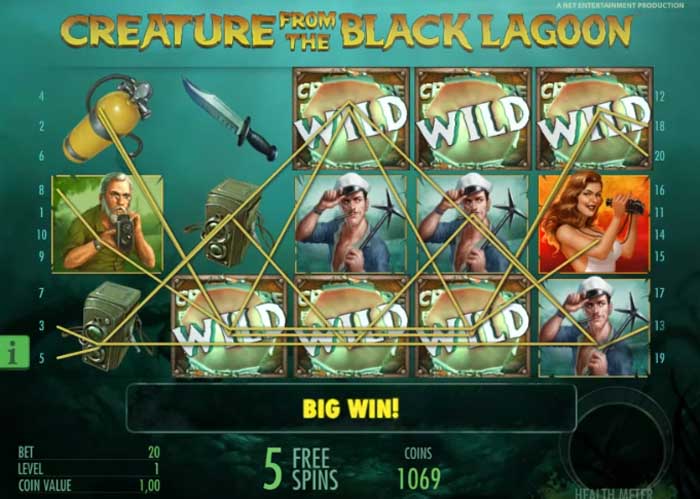 Creature from the Black Lagoon is loads of fun, especially for classic movie buffs. The whole retro feel of the visuals and the sound, as well as the cool references to the film itself are very entertaining. And speaking of entertaining, there are the different levels in the freespins round that you need to climb to, which can be also a pleasant kind of challenge. Not to mention how rewarding it can all turn out to be in the end. Wins during the base game can be rather moderate as are the intervals at which you can pocket them. But the medium to high variance of this title can ensure huge prizes during the freespins.