Disco Double is a fun, dance-themed online slot game by software developer iSoftBet. But besides being all about the dance floor and its groovy backing track, this title also blends in classic slot machine symbols. As a matter of fact, the lack of variety in this game’s symbols is also very much like things are in the old school one arm bandits. The setup isn’t as boring, though, you can be sure of that. However, more on that in just a little bit. As far as the visuals in Disco Double  go, they are of really high quality. The main color in this title is purple and it just seems to be everywhere: on the reels, in the backdrop behind them and even in the controls. But it’s nicely balanced with lighter and darker nuances and works just great. 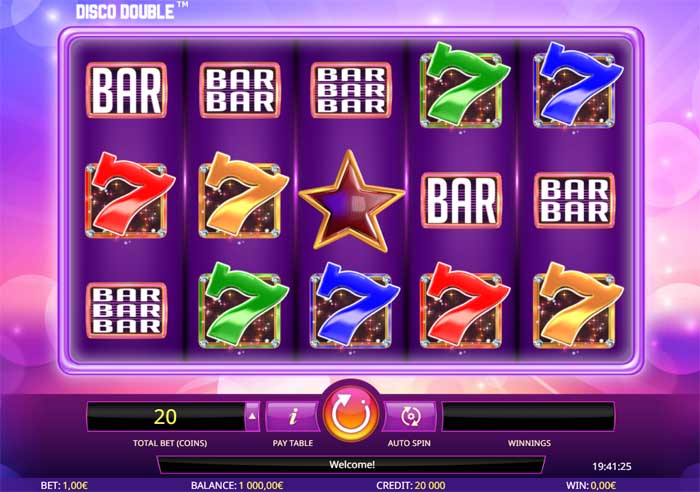 Now for the game’s symbols. As we mentioned, there isn’t quite as much variety here as one might expect. The three lower value icons are different BAR symbols. You have the single, double and the triple BAR icons. Next are the different lucky 7s, starting with the green and blue ones. Both offer the same payouts, following which is an increase in value for the red lucky 7. And finally, there’s the golden lucky 7. The most lucrative of the regular icons, though, is the red star, offering payouts of up to 800 coins per payline. The layout in Disco Double is pretty much what you see in the majority of other titles out there. It features 5 reels and 3 rows, with a total of 20 paylines. The paylines are fixed, though, so you won’t have the opportunity to regulate them. This, in turn, also affects the available betting range. Stakes here span from a minimum of 20p per spin up to a total of £20 per single spin. The average RTP here isn’t particularly high either, at about 95.11%.

Despite having that classic slot machine vibe, this offering actually boasts special symbols and with them – special features. First in line is the Wild symbol, which is the highest paying icon in all of the game. With its help, players can pocket up to a whopping 10,000 coins just from a single combination. But on top of that, the Wild will also be able to substitute for any of the regular symbols here. That way it can help create more winning combinations and potentially boost your prizes. It can also land in just about any position, anywhere on the reels. However, it will not be able to replace the game’s Scatter symbol.

The game logo is the game’s Scatter in this title, and though nowhere near as lucrative as the Wild, it’s still the second highest paying symbol here. It can also land anywhere on the screen during gameplay. But you goal will be to land at least 3 of these symbols during the same spin. As a result, this will trigger the freespins bonus round, awarding you a total of 10 freespins. 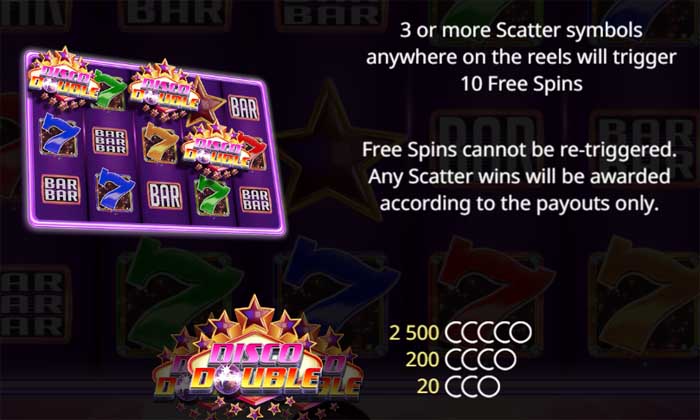 During this bonus round, players will benefit from an additional symbol on the reels. Keep your eye on reel 3, as it can produce a disco ball symbol in the bonus game. Notice that it has a 2x multiplier on it. This means that it will double the payouts for any winning combinations that you form during that spin.

To put in a bitter note, though, you will not be able to retrigger the freespins bonus round in Disco Double. So 10 freespins is all you get at a time. However, to further add to the disappointment, there’s a limits on the wins that you can make during this feature, too. As a matter of fact, once you reach the amount of 10,000 coins (if you do), the game will cancel what remaining freespins you have. So, you will resume the base game right after. Then again, that is still a pretty massive win itself. Just the presence of a limit is rather saddening.

Disco Double certainly looks really cool and funky, and the soundtrack will probably have you bouncing around to the beat as you spin the reels. But aside from that all that, gameplay is rather basic and straightforward. There’s just the one freespins bonus round to look forward to with 10 freespins. You cannot retrigger the feature, you cannot win over a certain amount in it and there aren’t that many extras to spice things up a bit. We would put this online slot game in the solid medium variance range. So, you will get a decent chance of triggering the bonus at somewhat regular intervals. And payouts may prove to be higher during the freespins. But all in all you will be benefiting from average-sized wins throughout gameplay.