Secret Elixir is an atmospheric slot game by software provider Novomatic. This game is all about medieval alchemists, potions, concoctions, magical crystals and all that goes with it. Unfortunately, the slot has the same basic Novomatic soundtrack, which is present in pretty much all other slot games by this developer. Adding more appropriate music could have potentially helped the general feel of this game. The background here would suggest that we’re in the laboratory of some kooky scientist, on his way to discovering the philosopher’s stone. As for the symbols, they include the perfectly styled lower value playing card symbols: A, K, Q, J and 10. Next are two ominous gargoyles, following which is an owl and two character symbols: a male and a female.

There are 5 reels and 3 rows in this game, with a total number of 10 paylines. Those are flexible and you can select a lesser number in the game settings. The betting range is also pretty flexible, starting with only 10p per spin and reaching up to a maximum of £100 per spin. And as this is a Novomatic slot game, it tends to stick to the average for this developer RTP of about 95%.

The Wild symbol in Secret Elixir is none other than the alchemist himself. He is also the most lucrative symbol on the reels, offering payouts of up to 1,000 times your total stake. In addition, he can replace any of the regular symbols to contribute to winning combos. However, he cannot replace the Scatter symbol. You will notice that the maximum number of any of the symbols here, including the Wild, that you can gather on a payline is 4. That is because the 5th reel only has elixir bottles on it. They serve as multipliers for your payline wins and can be 2x, 3x or 5x. 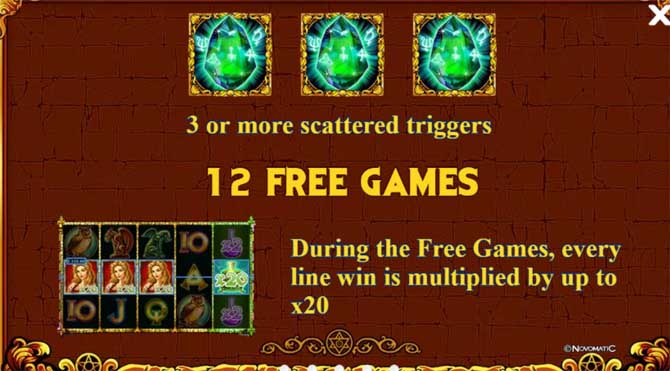 The Scatter symbol here comes in the form of the object of myth and legend – the Philosopher’s stone. It is responsible for triggering this game’s freespins bonus features. In order to activate the feature, you will need to land at least 3 Scatter symbols during a spin. This will reward you with a total of 12 freespins. The multipliers will increase in value during the freespins feature and will include 2x, 3x, 5x, 10x and 20x.

What’s more, you can also retrigger this feature and receive an additional 12 freespins. For this purpose you will again need to land three of more Scatter symbols anywhere on the reels. And last but not least, we shouldn’t miss pointing out the Gamble feature that this slot has. If the multipliers here aren’t enough for you, you can also play double or nothing to increase your wins.

Secret Elixir is a fun and exciting slot game with much to offer. The graphics are up to standard, the theme is entertaining and it has an unusual setup. The fact that you can also enjoy freespins is another unusual and appealing touch for a game by this provider.