Fairytale Legends: Red Riding Hood is yet another Netent’s venture into the world of fairy tales, after the now popular Jack and the Beanstalk. By the looks of it, it might be as successful as its predecessor, to say the least. However, it would be unfair to compare them, as Jack and the Beanstalk was all about one feature executed in a variety of different ways, whereas Red Riding Hood is more about a variety of different bonus features.

Graphically speaking, the game is simple, yet has a certain allure to it, especially when the animations for special features are activated. Moreover, the background sounds that remind one of a forest are much easier on the ears than even the best of soundtracks.

Technically speaking, this is a 5–reel, 3-row slot with 20 paylines. The coin value ranges from 1p to ₤1, while the bet range varies from 1 to 20 coins. There are an amazing 7 bonus rounds (well, it’s more like six and a half, depends on how you look at it). There are three that are randomly triggered and three that are triggered if you land three or more scatter symbols. The one extra feature is tied in to one of the randomly triggered ones, which we’ll explain presently. 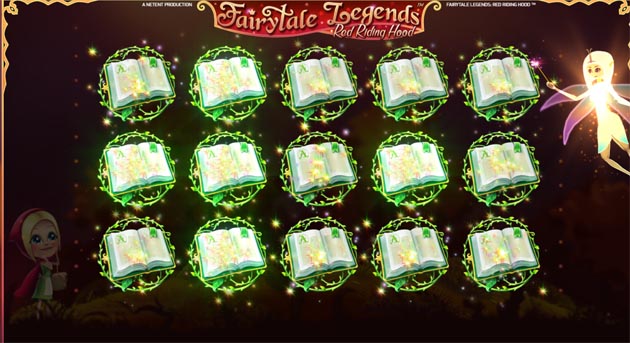 As mentioned, there are three random features, which may activate on any spin during the base game and freespins. These include:

This feature awards you an area of 5 to 9 medium win icons. These symbols will appear as an overlay for a single spin.

This one is triggered only after an unsuccessful spin during the base game, whereupon a medium win symbol is selected from the reels after this spin, and the other symbols, starting from the lowest paying ones, will start turning into that symbol until you land a winning combo.

During this feature, three or four wild symbols appear randomly on reels two, three and four during any given spin. Once the reels stop, and the winnings are paid out, you are awarded a sticky wild re-spin. This is the “and a half” feature we mentioned earlier. What it does is, basically, make the wilds sticky, which remain locked as the reels spin. Should you win one or more sticky wilds appear during the re-spin, you’ll get another one.

The bonus features are triggered when you land three bonus symbols (chests) anywhere on the reels, after which you get to pick between the three chests, each of which hides one of the three bonus rounds. 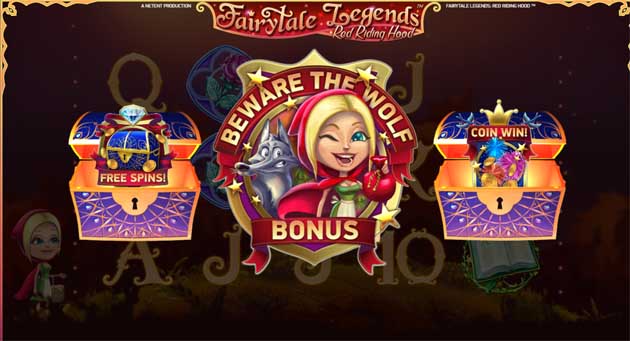 In this feature, you are awarded a sort of a bonus board game. There are 5 kinds of locations in it: coin win, double, arrow, jackpot coin win and collect. You play the game by spinning a whirligig, clicking around the screen to move around the board game and win coins.

This feature is triggered if you land three chest symbols (scatter), and then choose the one that holds them. Once activated, the feature awards you 10 freespins.

If you manage to pick the chest that holds the Coin Win feature, you’ll instantly be awarded a coin win which amounts to 15 times your current bet.

All things considered, yes, Fairytale Legends is definitely worth checking out! The graphics on this game from Netent is amazing and the game runs smoothly. Both the base game and the random special features are entertaining and have the potential for some big wins. One of NetEnt’s best games in our opinion.