Divine Fortune is among NetEnt’s latest releases and has caused quite the commotion around itself. By the very least, the title does sound like a promising one for a slot game. But what the title doesn’t reveal is that this game actually has an ancient Greek theme. It features fabled beings from some of the most famous Greek myths. Such are, for example, Medusa the Gorgon and Minotaur –the bullheaded monster that lived in the dungeon-labyrinth. The other mythical creatures are the vicious Nemean Lion and the eagle-lion hybrid, which we know as the griffin. There are lower value playing card symbols that match the theme of the game and resemble Greek writing. And the soundtrack provides that etheric, divine touch to the atmosphere. 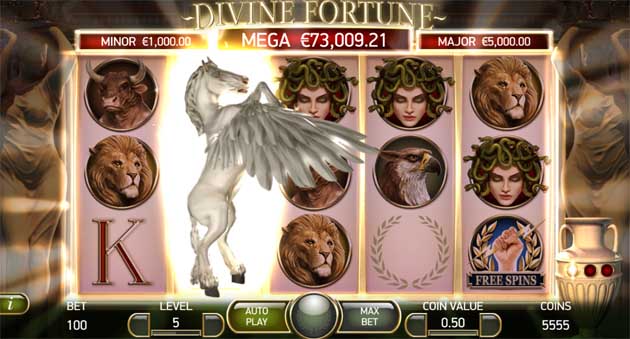 The layout features 5 reels and 3 rows with a total of 20 paylines. There’s also a progressive jackpot, you wouldn’t want to miss out on. Stakes can range from 20p up to £100 per spin and you can expect a RTP of about 96.59%.

Aside from the symbols we already described, there are also several special symbols that also do the theme justice. First is Pegasus, the renowned winged horse, which is the game’s Wild symbol. As such, it may replace any of the regular symbols to help create winning combinations. The only symbols it cannot substitute for are the Bonus and Freespins symbols. But there’s more to the Wild symbol. In fact, it offers a Falling Wilds Re-spin feature, which sees to it that after each spin that had a Wild on the reels, the Wild will shift down one position, triggering a respin. This will continue happening until there are no more Wilds on the reels. 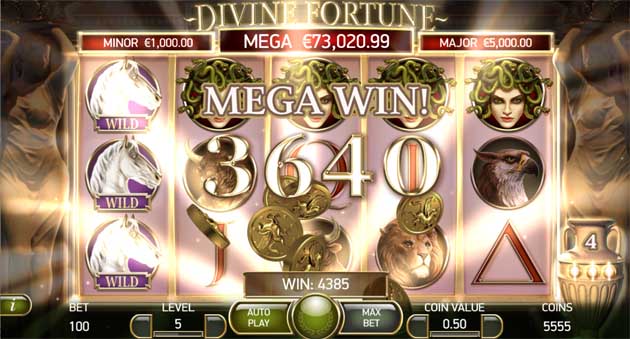 In addition, there is also a Wild on Wild feature. If a Wild symbol lands behind a Falling Wild, that Wild will expand to cover the whole reel. As for the Freespins symbol, it can appear anywhere on the reels and you will be looking to land 3 or more, in order to trigger the freespins. 3 symbols will give you 5 freespins, 4 will give you 8 and 5 freespins will award you 12 freespins. During this feature, any Wild symbol will become a Wild on Wild.

Finally, collecting 3 or more Bonus symbols will be responsible for triggering the Jackpot Bonus Game. Those Bonus symbols will randomly distribute themselves across a set of 15 independent reels. Each of the symbols can give you cash prizes of anywhere from 10 to 200x your stake. You will have three spins to begin with, but for every Bonus symbol that you land, you will receive an additional three. 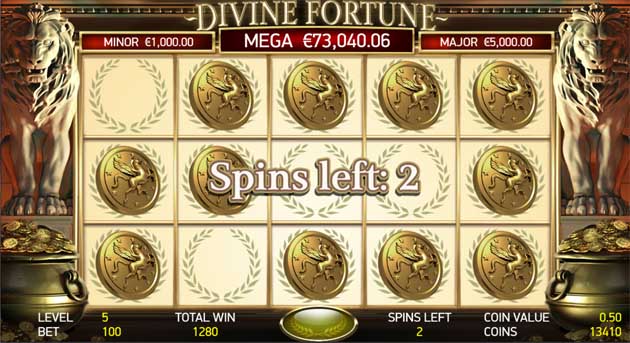 Divine Fortune is a medium variance slot game that certainly brings much to the table. The design and the graphics quality are certainly great, but it’s the bonus features that make the game. Their abundance and originality by all means make the overall gaming experience exciting and worthwhile. Another great release from NetEnt and a great new addition to the progressive jackpot games.