Forbidden Throne is a pretty compelling online slot game by software developer Microgaming. This particular developer is well known for creating atmospheric games with high quality graphics and fun features. Forbidden Throne does to an extent embody all those traits. The backdrop takes you to a mysterious land of fog and cliffs with really tall peaks visible in the distance. It really feels like a sophisticated RPG game, to be honest. And the symbols on these reels will further enhance that impression, but we’ll get to them in just a little bit. However, speaking of the reels, they are transparent, which allows you to fully take in the background, which is largely what helps create the overall atmosphere. There is an epic soundtrack to contribute towards the same cause, as well. 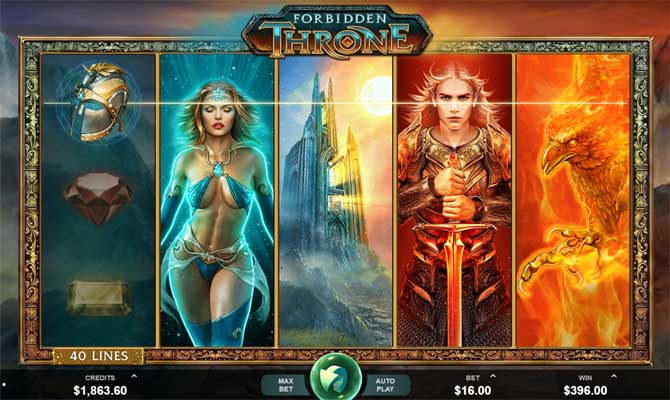 And now that we’ve finally reached the symbols here, let’s describe them. First in line are the lower value gemstone symbols. They come in different shapes and colors, making it easier to distinguish them. First is the green jewel, following which is a blue, yellow and orange gems. Last but not least is the large ruby symbol. Moving on to the higher value symbols, we have a very large book (possible of spells, considering the genre) and a very interesting headpiece. After that comes a gold helmet with blue gems for eyes, and a blue snowflake shaped crystal symbol. Finally, the highest value symbol of the lot is the large burning orange stone, held in a gold frame. As for the layout, there are 5 reels and 3 rows, so things are pretty traditional. The total available number of paylines is 40, but you won’t be able to adjust them. Likewise, the stakes here start at 40p per single spin and range up to the maximum of £200 per spin. The RTP here is also pretty satisfying at exactly 96.01%.

The first special symbol you will want to keep an eye out for is the slots’s Wild icon. It depicts the game’s logo and can appear in any position, on any of the five reels. Furthermore, it will also be able to stand in for any of the other symbols to help create winning combinations. The one single symbol that the Wild will not have the ability to substitute for is the game’s Scatter. You won’t be able to miss it, as it comes in the shape of a glowing orb. But aside from this, this slot game also boasts a full reel Wild feature. You can benefit from it literally during every spin, as it will see at least one whole reel become fully Wild. Better yet, each reel has its own character, which will represent that full Wild reel. There are two horses on the outer reels: one is blue and has a very icy feel to it. And the other is a fiery, flaming steed with what appears to be a long horn. Then there’s both a male and a female characters, whereas the middle reel can be taken over by a depiction of a mythical fortress with very tall walls. 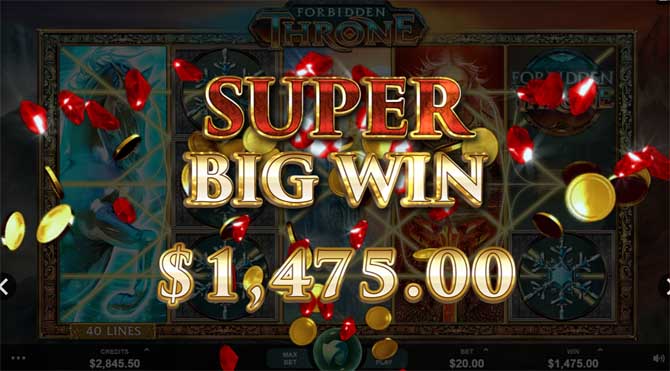 Note, however, that the Scatter symbols can appear over the Wilds, so you won’t have trouble triggering this game’s bonus feature. And in order for you to do that, you will need to land at least 3 Scatter symbols during the same spin. The number of Scatters you hit will decide the exact number of freespins you will get. Thus, 3 and 4 Scatters can award you 10 and 20 freespins, respectively. And landing the maximum of 5 Scatter symbols can award you the total of 30 freespins. Better yet, you will also have the opportunity to retrigger this feature by landing another 3, 4 or 5 Scatter symbols. You can then receive an extra 10, 20 or 30 freespins. And you can even keep retriggering this feature as often as you can. 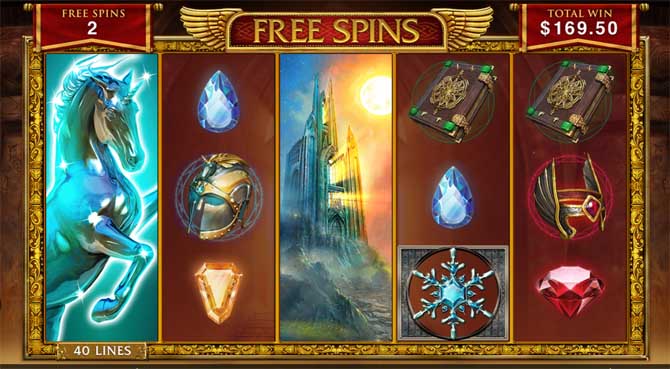 And just like in the base game, you will also be able to benefit from the full Wild Reels during the freespins bonus round, as well. Due to this game’s high variance, we’ll tell you right away that triggering this feature won’t be the easiest task. But again, due to the variance, it can potentially prove to be incredibly rewarding. Forbidden Throne has the ability to award you up to 500 times your stake on any given spin.

Forbidden Throne doesn’t offer a whole bunch of different special features to dazzle you with. However, it is rather tempting to know that you will have at least one fully Wild reel for every spin during both the base and bonus games. In addition, the number of potential freespins you can gain is also fairly attractive. But you will do good to watch out for you bankroll, as this game’s medium to high variance can eat away at it pretty quickly.