The Finer Reels of Life

The Finer Reels of Life is an exceptionally well-made online slot presented to you by Microgaming. And in truth, this slot game really is about the finer things in life. It’s about fine wine, expensive cheese, high quality chocolate, the best cigars and aged whiskey. So, in a sense it’s in the luxury genre which isn’t all that uncommon in the gaming industry. But it’s more tasteful and subdued, with less of the sparkle and pizzazz you often see in slots with a similar theme. There’s a really soothing soundtrack playing that kind of gets you in the mood for a relaxed evening when you can treat yourself to something nice. In the backdrop you can make out the some candles and a pool overlooking the night city. The graphics quality is very decent, too. So there’s an overall sense of sophistication here. 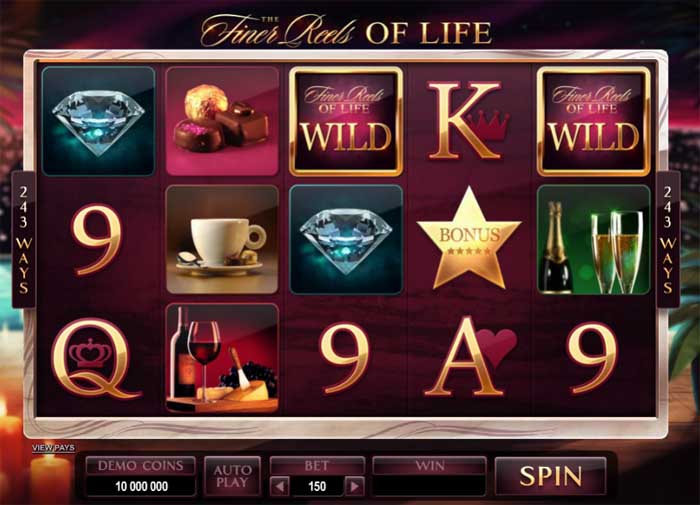 And if you really want a sense of fine dining, head over to the paytable. It really looks like a menu in a sophisticated establishment. You will notice that the symbols include the golden lower value symbols. They are A, K, Q, J, 10 and 9. Moving on to the higher value symbols, we have a few pieces of chocolate, following which is an elegant cup of coffee. This brings us over to the wine bottle and piece of mature cheese, after which is the glass of whiskey and the cigar. Next up is a bottle of champagne and two glasses, and finally is a large diamond symbol. As far as the layout goes, there’s nothing unusual. It’s just 5 reels and 3 rows, but there are 243 ways to win. Stakes here start comfortably low at 20p per round and reach up to a maximum of £40 per spin. As for the RTP of this slot, that too is at a very comfortable at 96.47%.

The Finer Reels of Life has its very own Wild symbol, which is the second most lucrative icon on these reels. Besides that it can also land in any position on the reels and replace any of the other symbols. And in addition to that, the Wild will also double the payouts for any winning sequence it becomes a part of. However, the one symbol that it will not be able to substitute for also outranks it in value and that is the Bonus symbol.

We should also mention that the Wild also has its own special feature. It can randomly at any point in the game fully cover up to 5 reels, making for even bigger wins! This is the so-called Wild Celebration feature, and it has an enormous win potential, as it can cover all five reels in wilds. It is most common to get one, two or three reels as wilds, but that also can produce some very big wins. 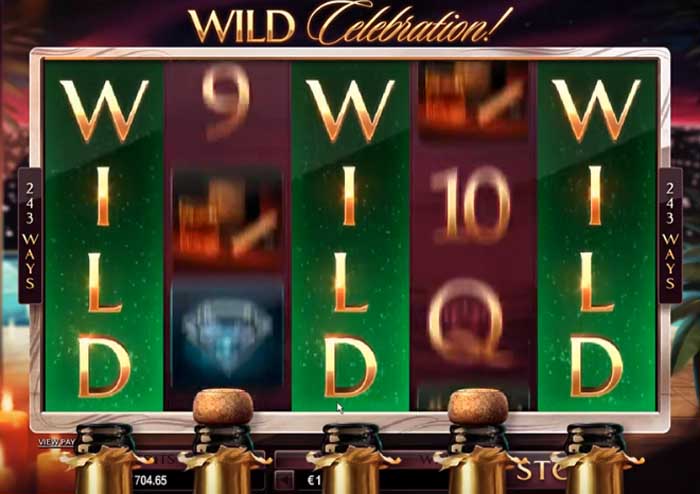 As for the Bonus/Scatter symbol, which is very lucrative, it can also land in any position on the reels. And with its help you can enter the Finer Features of this online slot game. To do so, you will need to land at least 3 Scatters at the same time. And the more times you trigger this feature, the more different bonus rounds you will unlock over time.

The bonus features that will be available to you already from the first entry is Coffee & Chocolate. It will award players 10 freespins, where all wins will be subject to a 5x multiplier. Moreover, you can even retrigger the feature and gain another 10 freespins on top.

After the 5th trigger, you can unlock the Wine & Cheese feature, which will in turn award you a total of 15 freespins. In addition, you will benefit from the Wild Wine feature, which can add extra Wilds to the reels. You can also retrigger this feature and gain up to an extra 4 freespins.

Furthermore, there’s also the Whisky & Cigars round, available from the 10th trigger. It will give you 20 freespins and Burning Wilds. In other words, random symbols can become 2x or 3x multipliers.

And last but not least, after the 15th trigger, players will also get to benefit from the Champagne & Diamonds round. It will give you a total of 25 freespins and a Rolling Reels feature, as a result of which consecutive wins can increase your multiplier up to 5x. 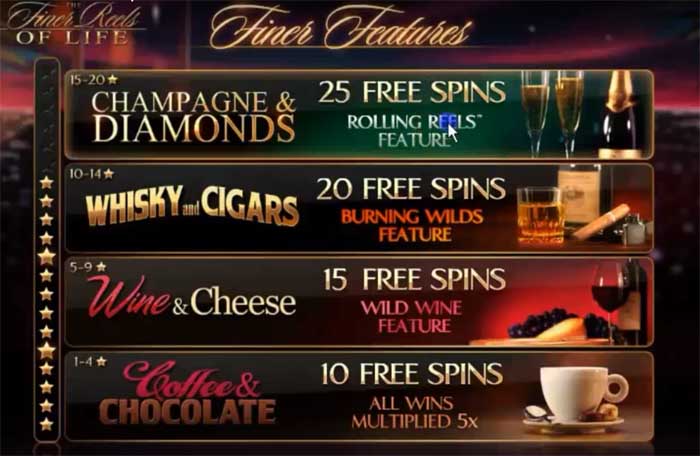 The Finer Reels of Life is certainly a classy title, with very well made graphics and gameplay. It’s all very stylish and sleek and fun to play. What may seem a little frustrating, however, is the bonus system, where you need to continue playing over a longer period of time in order to gain access to all the features. Yes, it might take a bit, but it is really cool that you are able to choose what feature you would like to play each time you trigger the feature after you have unlocked them. Some players prefer to unlock all the features on minimum bet size, and then go about playing it with their regular size of spins.

We would also like to point out that this is after all a high variance slot, so it has the possibility of awarding you with really big wins, but you can also have long dry spells with few wins, so have that in mind when choosing your bet size.

If you are wondering what of the four bonus features you should pick, it is hard to give a definitive answer. We are big fans of the Wine & Cheese feature as this can go mental and produce som insane wins, filling the screen with wilds if you are lucky. The other features have potential as well however, so our suggestion is to mix it up a bit.