If you are a fan of vintage slot machines and that’s the exact kind of feel you’re after, then try Hot Chance. Hot Chance is a slot game by developer Novomatic that may be just what you’re searching for. It has an overly simplistic look and feel, where the hallmark Novomatic soundtrack actually does the theme justice. There’s no actual backdrop to marvel at, just a solid orange color behind the reels. As for the reels themselves, they provide a nice dark blue background for the icons on them. You will see all the most characteristic retro styled slot machine symbols here. They start off with the X and work their way up to the cherries, lemons, oranges and plums. Following this bunch is a set of other highly recognizable symbols: Bar, the gold stars and the lucky number 7.

As far as the setup goes, things are pretty basic with only 3 reels and 3 rows. The total number of paylines amounts to 5, but you are free to play with less, if that’s what you want. You will need to access the game’s settings to do so. You can play with as little as only 2p per spin or anywhere up to £50 per spin. And the RTP is standard for this developer at around 95.17%.

As this is a retro styled slot game, you won’t find any Wild symbols here. There are no Bonus or Scatter symbols in this slot, either. However, the fruit symbols can appear stacked and that is how you can trigger the single bonus feature that this slot actually has. In order to trigger the feature, you will be looking to fill the entire screen with any of the four fruits. 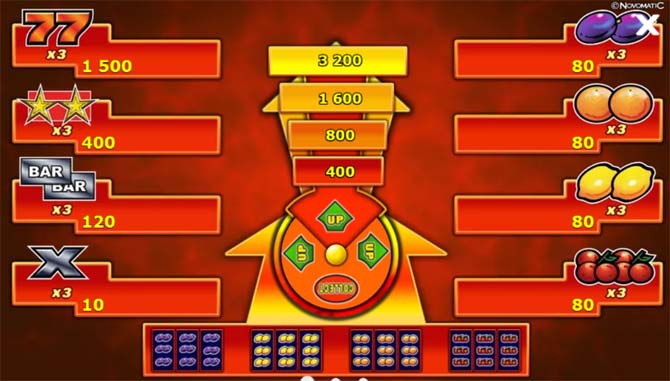 The Hot Chance bonus feature will bring out a new screen with a bonus game. Before you will be 4 different values of 40x, 80x, 160x and 320x your stake. You are guaranteed the lowest prize of 40 times your stake, however, once you start spinning the wheel, you can increase that amount. The wheel only has two possibilities: up and collect. Up will award you a higher amount, whereas collect will end the feature. After each spin, the number of Up symbols on the wheel decreases, whereas the Collect symbols increase in number.

In addition, this game also has a Gamble feature, which will allow you to double your win after any winning sequence up to 8 times. It’s a simple game of double or nothing, like in many other slot games by this and other developers. But watch out, because a single wrong guess will be enough to end the feature.

Hot Chance is an overly simple slot game, one that old school slot machine fans will love. In addition to being as basic as it is, however, the developers have also managed to organically fit in an equally simple bonus feature. But with that said, triggering it may not be all that easy.