Huangdi the Yellow Emperor is a slot game by one of the world’s most renowned software developers – Microgaming. It has a Chinese theme, but don’t let that put you off. We know that the Far East has been the theme of choice for slot games since the beginning of time, but this one isn’t like most. It centers on the Chinese hero and legendary sovereign and, in fact, also a deity. The graphics and sound effects are really top-notch, as you might expect from this manufacturer. The backdrop is almost hand-painted, with exquisite fine detail. We can say as much about the symbols, too, including the lower value playing card symbols that range from Ace to 10. The higher value symbols are just as impressive and can appear stacked on reel one, with the exception of the Yellow Emperor himself, who can appears stacked on all reels.

The layout here features 5 reels, 3 rows and 25 paylines. The paylines are not subject to adjustment, but you may set your stake from 25p up to £50 per spin. In addition, players can also expect a satisfying RTP of about 96.5%.

As we already pointed out, the higher value symbols can appear stacked on reel 1. The Yellow Emperor, however, can appear stacked on all the other reels, as well. When a certain symbol appears stacked, it will make all the matching symbols that are part of a winning combination expand to cover the entire reel they’re on. During the freespins feature, this applies for the Wild symbols, as well. 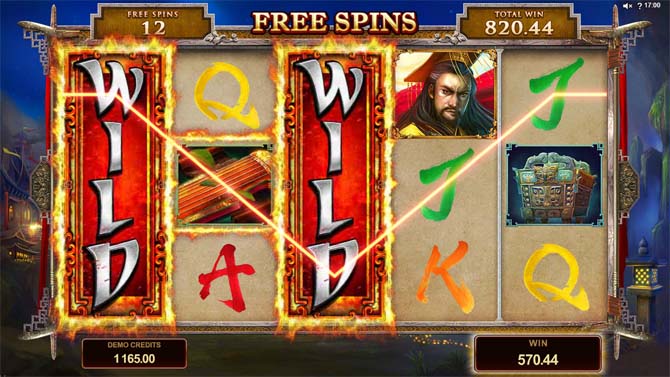 And speaking of the Wild, it can replace any of the regular symbols to create winning combos. It can appear anywhere on the reels, but it cannot substitute for the Scatter symbol. The Scatter, in turn, depicts a stunning gold dragon and it also offers the highest payouts of any other symbols on the reels. Furthermore, if you land 3 or more Scatter symbols during a spin, this will trigger the freespins feature. As a result, you will receive a total of 15 freespins. But if you land more than 3 Scatters, there are extra bonuses in store. For example, if you land 4 Scatters, you will receive 10 times your stake. Likewise, 5 Scatter symbols will award you a whopping 100 times your stake.

Throughout the duration of the feature, the Wild symbol can appear stacked on reel 1. And if that isn’t enough for you, you can also retrigger this feature for an additional 15 freespins! To do so, you will again need to land 3 or more Scatter symbols anywhere on the reels.

Huangdi the Yellow Emperor doesn’t have overly complex bonus features, but they can be mighty rewarding. In addition, the fantastic graphics and unique atmosphere the developers have managed to achieve certainly make this game worth the spin.