In Jazz is an online slot game by software developer Endorphina. If you’re a jazz fan, you are going to love this title. The graphics here are on spot, even though they aren’t high definition or over-the-top modern and fancy. But that’s just how it should be for this theme, right? They should have kind of a retro, hand-painted quality and they do. Of course, there’s also that portion of glam and pizzazz that is also typical for jazz, and the developers have done a good job in merging the two. In addition, what jazz slot game would this be if it didn’t have an appropriate soundtrack to accompany gameplay? So there will be plenty of saxophone here to go around. Plus, the backdrop here really helps set the mood. It brings you to an old-fashioned club, with the green floors and red cushion chairs. 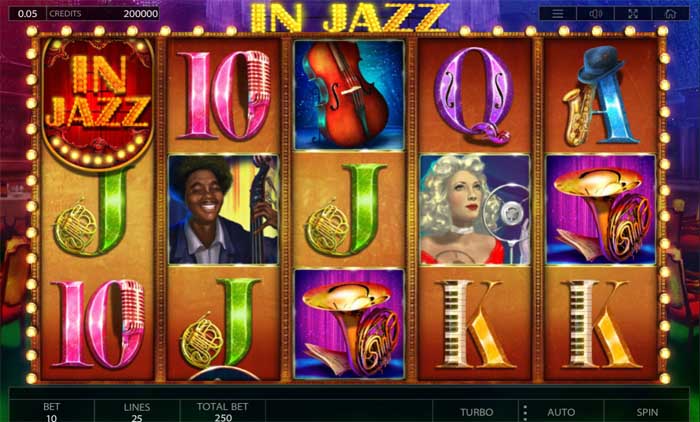 As for the symbols here, they also have some neat animated sequences to show off. And they include the very elaborately styled lower value playing card symbols. These are A, K, Q, J and 10, and each one of them looks incredible. They all represent different instruments, except for the 10, which has a microphone. But moving on to the higher paying icons, we have actual instruments such as the double bass and the horn. Following them, we also have the two musicians, whose payouts are a little higher. And finally this brings us to the female singer in the red dress. You will notice the layout here is pretty much the same as you see in the majority of online slots these days. There are 5 reels and 3 rows with a total of 25 paylines. However, these paylines are fixed, so you won’t have the opportunity to adjust them. This will also reflect on the betting range, which starts at a minimum of 25p per spin. The maximum amount you will be able to wager on these reels is £25 per single spin. And the average RTP you can expect here is about 96%.

The treble clef symbol in this online slot game is the second most lucrative icon, as well as the game’s Wild. As such, it will have the capacity of replacing any of the other symbols on the reels. This will ensure that you get a chance at landing better and possibly higher paying winning combos. It can also appear in any position, on any of the 5 reels. However, there is one symbol that the Wild cannot substitute for and that is the game’s Scatter. The Scatter symbol, in turn, comes in the shape of the game’s logo. This is the highest value symbol on the reels, offering payouts of up to 200 times your stake. But not only can it offer the highest prizes, you can pocket them without having to land the Scatters on an active payline. It, too, just like the Wild symbol can appear in any position on the screen.

However, there’s even more to the Scatter icon that just that. It is also responsible for triggering this game’s single special feature – the freespins bonus round. And in order for that to happen, you will need to land a minimum of 3 Scatter symbols in anywhere on the reels, simultaneously during the same spin. This will, in turn, result in you receiving a total of 10 freespins. And on top of that, the freespins also come with an extra feature – the Jazz Band Joker. This feature will see to it that the character symbols can becoming expanding symbols, covering up to all 3 positions of a reel.

In addition, players also get the opportunity to retrigger the feature and earn an extra 10 freespins. Just look out for landing another 3, 4 or 5 Scatter symbols all at the same time and you’ve got it. In addition, In Jazz also boasts a Risk feature, where you get to gamble your prize after a winning spin. If you choose to access the side game, you will be facing a dealer. You will have 5 cards to pick from to beat the dealer’s card. Succeed – and you will double your prize. If you pick a card that is inferior to that of the dealer, though, you will lose your amount altogether.

In Jazz is certainly a real treat to both look at and listen to at the same time. The graphics are great and really add to that smooth, classy jazzy vibe. There are vibrant colors, a simple and appealing interface and all you’d want from a game like this. Gameplay is also fairly simplistic, with only one bonus feature. But you will get your chance to trigger it at decent intervals with higher prizes in store thanks to the Jazz Band Joker feature.