Twerk is a provocative new slot game by game developer Endorphina. As you can tell from the name, it centers on the popular dance move called twerking. It’s very unusual, even for a slot game, where every theme you can think of has practically already been covered. Twerk features the behinds of seven different ladies that will perform their little dance every time they form winning combinations. The soundtrack matches the theme perfectly, as does the background. The game is set against a brick wall in an urban dance studio and features throbbing speakers on each side of the reels.

The layout is very simple, more like that of traditional slot games. It has 3 reels and 3 rows, with 5 bet lines. It has a fairly decent RTP of 96% and you can bet with a minimum of 5p per spin. And you can increase the amount all the way up to £50 per spin.

Though the layout seems rather simplistic, Twerk actually has some pretty interesting features. For one, you will notice that there is no Wild symbol in this game. Instead, there is a single Scatter, which stands apart from the rest of the icons. It depicts the letters VS in gold and can activate the Battle feature.

It can appear on any position anywhere on the reels and you will be looking to land at least three. This is regardless of whether or not they land on a payline or not. If you can land at least three, they will grant you a 5x bet multiplier. In addition, you will receive 5 freespins as part of the Battle feature. First up, it will show you a lineup of all the girls in the game, after which the lights will go off. Then, a spotlight will randomly choose your character and an opponent. After this, a new set of reels will appear for the freespins.

The result of each of those freespins will determine the outcome of a battle, of which there are five. Either you or your opponent will receive a point at the end of each spin. At the end of the freespins, you’ll either win or lose the whole battle, depending on the number of points. Winning will reward you a prize, losing will end the feature. 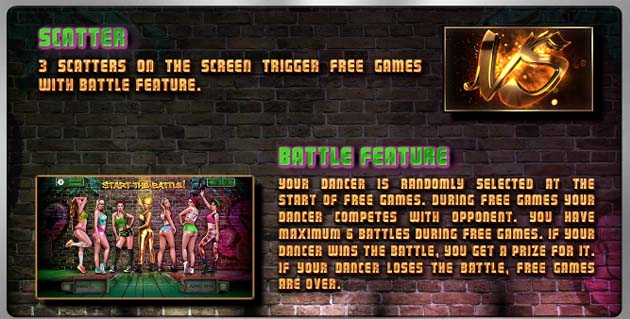 In addition, the game also offers a Risk feature. It will allow you to gamble any wins you have and potentially double them. Each time you spin a winning combo in the base game, you can either collect your win or Risk it. Risking it will open a new screen with a set of cards. One is open – that’s the dealer’s card. You will need to choose one of the four other cards, facing down. If yours is higher than that of the dealer, your amount doubles. If it’s lower – you lose your winnings. You can have up to 10 attempts at this game, allowing for some massive wins.

Twerk is an innovative game, which brings a lot to the table. It has an exciting bonus round and an entertaining side game. Despite not having too many reels or paylines, it can still make for some good wins.