Jungle Spirit: Call of the Wild

Jungle Spirit Call of the Wild is a very rich in terms of its visuals, but also in the gameplay it offers, slot game by world class software provider Netent. This game brings you straight to the depths of the jungle that’s just bustling with life. A very cool soundtrack with drumbeat elements helps enhance the overall atmosphere, making for an even more authentic feel. Needless to say, the graphics here are simply outstanding – that will strike you as soon as the game loads. Everything from the large plant leaves, to the lianas hanging over the reels exhibits such fine detail, that we can’t help but admire the work of the developers. There are also neat yet subtle animated features here that add even more life to the game. Such are, for example, the little butterflies and fireflies flying across the screen and the greenery swaying from the wind. 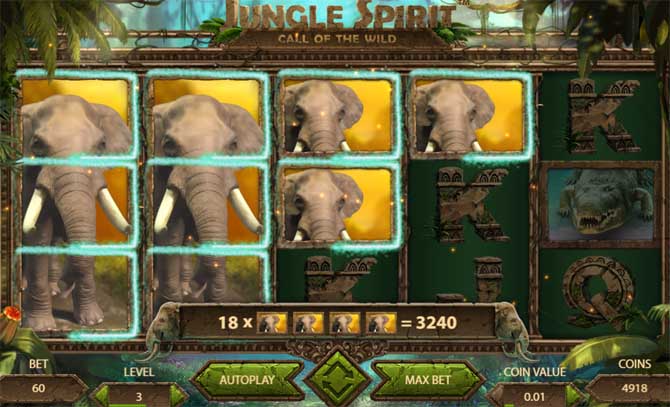 The symbols here are also quite elaborate and demonstrate just as much detail as their surroundings. We rarely see so much attention paid to the lower value playing card symbols, which are also present in this slot game. They include A, K, Q, J and 10. All carved out of stone, they each resemble sculptures of an ancient civilization, complete with the characteristic ornaments. The higher value symbols here all represent different wild animals, hence the title of this slot. First in line is the cobra, following which is another reptile species – a ferocious crocodile. After that is a large brown bear, and further increasing in value comes the majestic elephant. Finally, we have the mighty king of the jungle – the tiger. You might argue that it should be the lion, but lions don’t live in jungles. The tiger is the highest value symbol on these reels. As for the setup, it features the customary 5 reels and 3 rows, with 243 to 1,024 ways to win. Stakes here can range from 20p per spin up to £100 per spin.

Jungle Spirit boasts a total of 3 different bonus features, so hold on tight. Interestingly, it lacks a Wild symbol, but tends to make up for that with its Expanding symbol feature. Each of the wild animal symbols can potentially expand to cover a full reel. You will notice as you spin the reels that each of them can land with a golden butterfly on them. If one of them becomes part of a winning combination whilst that butterfly is on them, that symbol will expand to cover the entire reel it’s on. This can happen all throughout the game, even during other bonus features. 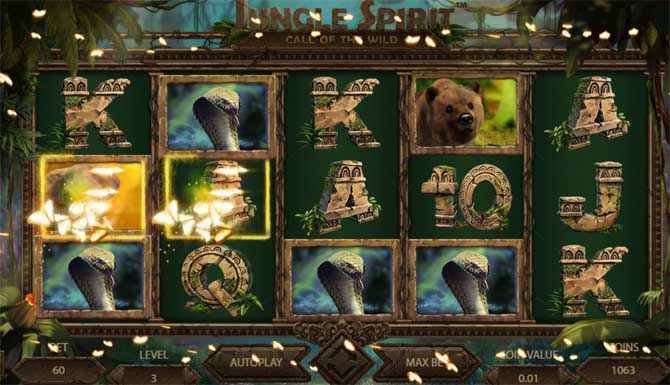 You can also benefit from a random feature in this game, which doesn’t hurt either. It is called the Butterfly Boost feature and it can only become active during the base game. In addition, this feature can occur after a winning spin, at which point butterflies will come onto the screen and make at least 1 or as many as 5 symbols that are part of a winning sequence expand to cover their whole reel.

But let’s move on to the highlight of Jungle Spirit: Call of the Wild, which is its freespins bonus round. Here we should introduce the one symbol we have not yet mentioned – the pink water lily. It is the game’s Scatter symbol and will be responsible for triggering the freespins feature. The Scatter can appear in any position on the reels, but you will need to land at least 3 during a spin, in order to activate the bonus. Depending on the number of Scatters you land, you can also receive additional features. For example, 4 Scatters will give you a prize worth 15x your total stake. Likewise, if you land 5 Scatters you will receive a prize of 50 times your stake. What’s more, though, regardless of the number of Scatters, you will be playing the freespins with 1,024 ways to win, instead of the 243 in the base game. 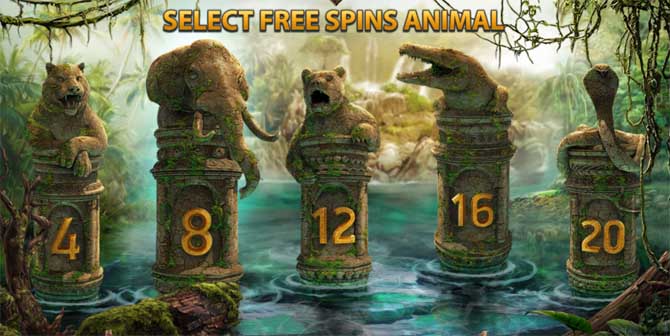 But before you get to start playing them, you will need to choose one of the wildlife character symbols. That symbol will be the only one of the animal symbols present during the freespins. Depending on that, you will also receive a different number of freespins. Thus, the Tiger will give you 4 freepins, whereas the Elephant and the Bear will give you 8 and 12 freespins, respectively. Finally, the Crocodile will give you 16 and the Cobra – 20 freespins.

Jungle Spirit Call of the Wild is a medium to high variance slot game that can be both very rewarding and very entertaining. The graphics and gameplay here are nearly flawless, so this will surely offer a great gaming experience. And with the potential of winning up to an amazing 7,678 times your stake, this new Netent slot will certainly be worth anyone’s while. We like the fact that you are able to choose what kind of volatility you like in the free spins feature. If you pick the tiger, you only get four spins, but the tiger is the highest paying symbol, so this pick will often pay nothing, but if you are lucky it will give you a massive win. The cobra on the other hand, is the low variance pick, with 20 free spins with the lowest paying symbol. We usually go with the elephant or the bear, for a medium to high variance option, but this is all up to you. Give it a spin and see what you prefer. The return to player percentage is set at a decent 96.47%.