Lord of the Ocean

Lord of the Ocean Slot Review

Lord of the Ocean is a very entertaining slot game by Novomatic and is also rather popular with players worldwide. In fact, it’s among this developer’s most recognizable slot games and with good reason. The reels provide some beautifully designed symbols that all give off that realistic impression of being underwater. Aside from the differently colored playing card symbols, you will also come across images of sunken treasure and charming mermaids and mermen. In addition you will see the Lord of the ocean himself – Neptune, looking rather severe up on the reels.

The layout of Lord of the Ocean features 5 reels, 3 rows and a total of 10 paylines. You can adjust the number of paylines to a lesser number in the settings if you so choose. The RTP is a rather standard for Novomatic just over 95%. And you can bet with amounts ranging between 10p and £100 per spin.

Interestingly, Lord of the Ocean doesn’t have its own Wild symbol. Instead, it has a Scatter, which can act as Wild. Meaning, it is well capable of substituting without exception for all the other symbols on these reels. But it also comes with its unique Scatter symbol properties and that’s the responsibility of triggering the game’s bonus feature.

You will need to look out for three Scatters on the reels at the same time. They will activate the slot’s Freespins bonus feature. As a result, you will receive 10 freespins with a 2x multiplier on all your wins throughout the duration of the feature. What’s more, you can benefit from retriggering this feature! Just land another 3 Scatters anywhere on the reels and they will reward you an extra 10 freespins. And what’s best, you can just keep on retriggering the bonus for as long as you can. 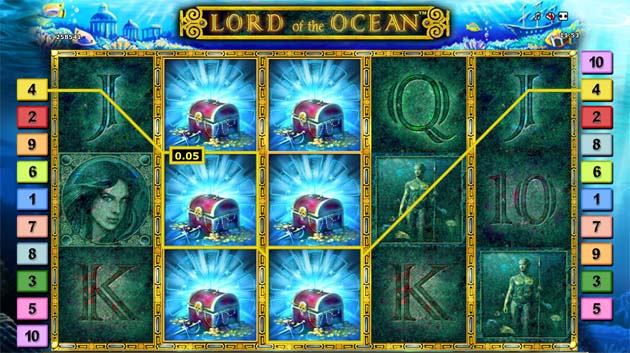 And that’s not all yet. In addition to the freepins, within this bonus game one random symbol will expand to cover an entire reel. This can make for some fantastic winnings!

And to top it all off, there’s also a side game to add some variety to the base game. Every time you spin a winning sequence, you will have the option of either collecting your prize or gambling it. Simply click on the Gamble button to make us of the opportunity of doubling your wins. A new screen will appear and you will have to guess the correct color of a blinking card. You can choose from black and red, so your chances of winning are 50/50. If you guess correctly, you will double your amount and move on to the next try. But if you’re wrong, then you will lose whatever amount you won from the spin.

Lord of the Ocean is a favorite game of many players and it’s because of the great gambling experience it offers. The freespins feature with its expanding symbol does offer the possibility of truly great payouts. And it doesn’t hurt that the graphics are really nice, even despite this not being a brand new game.