Moby Dick is a video slot brought to you by slot machine developer Rabcat and is based on the famous novel of the same name. Those who’ve read the book or have at least seen one of its screen adaptations know the focal point of it is the quest for revenge of a sea captain on a white whale. It’s a serious work of art with little humor in it, but Rabcat’s version of things is a bit more lighthearted. The graphics have a cartoonish vibe, and you will see comic portrayals of the main characters all throughout gameplay. And the overall quality of the visuals is quite stunning as well. The backdrop is the sea itself, and the animated waves will come splashing across the reels every so often. There’s also plenty of noise in the background, such as seagulls and the sound of the sea. Watch out, as you might even catch a glimpse of the legendary whale himself. 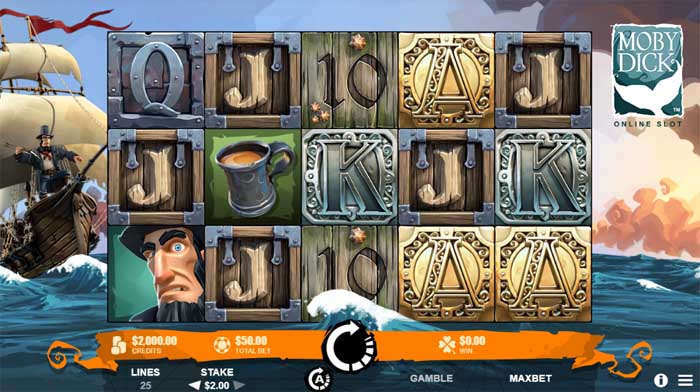 The symbols here kick off with the lower valuable card symbols, of which there are five in total. These are very nicely fitting in with the theme, and each one boasts its very own design. They come in different materials, as well, ranging from wood and stone to gold and silver. The icons are A, K, Q, J and 10. Straight after are the higher value icons that bear more relevance to the game’s theme. First in line is a pint of ale, following which we have an anchor symbol. Next we have a symbol presumably depicting Captain Ahab, after who, finally, is the white whale Moby Dick. The layout in this title features a regular grid of 5 reels and 3 rows. And on it there is a total of 25 paylines in total. So, the stakes here are fairly within reason, starting at a minimum of 25p per round. The maximum possible bet you can make on these reels will set you back a total of £50 per spin. Moby Dick from Rabcat has a set theoretical RTP of 96.00%.

The ship’s wheel acts as the game’s Wild symbol and is also just as lucrative as the Moby Dick icon. However, it will only offer you payouts for landing all five symbols on a payline, so keep that in mind. More importantly, though, its primary wildly function is to replace other symbols on the screen. In doing so, it will be able to contribute to winning combos and, thus, make for better prizes. There are, however, exceptions as to the symbols the Wild will be able to substitute for. These are the Jackpot and Scatter symbols. 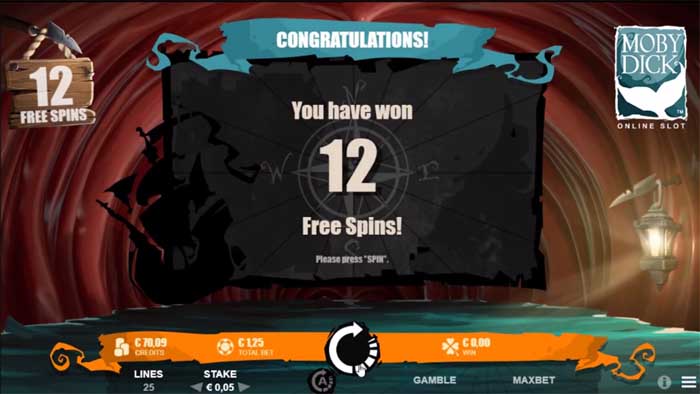 The Scatter symbol in Moby Dick pictures the inside of the whale’s mouth, so you know where you’re headed if it eats you. It can show up in any reel position, in fact even on multiple positions on the same reel. It doesn’t offer its own payouts, though. Instead, the Scatter will kick off the freespins feature. To activate the feature, you will need to land at least 4 Scatter symbols during a spin. As a result, you will get the minimum of 10 freespins. More Scatters will obviously equal more freespins. Thus, 5 Scatter symbols will award you 12 freespins, whereas 6 Scatters will give you a total of 15 freespins. And finally landing 7 or more Scatters will reward you with the maximum of 20 freespins.

Better yet, you can also even retrigger the feature by landing another 4 or more Scatter icons. This will award you another batch of freespins on top of the ones you have left. Furthermore, all throughout the bonus round, each freespin can give you up to 3 Wild symbols on reel 3. 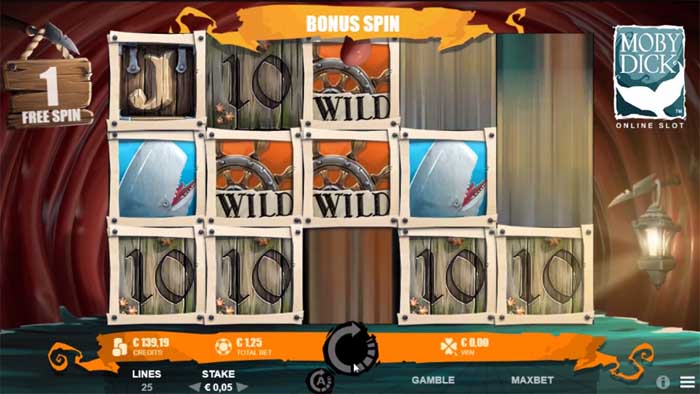 Moby Dick also have a freezing win feature that we have seen in other slots such as Jack Hammer from NetEnt. If you hit a winning combination, or three free spins symbol, what will happen is that you get an extra bonus spin, and if you add up winning symbols on that spin, you will get another spin. It keeps going this way until you don’t hit any more symbols to add on the winning line.

Moby Dick is a cool new online slot game with plenty to offer in terms of its visuals. The graphics and animations on this Rabcat title is stunningly well-madel made. As far as gameplay goes, though, things are pretty simple. There aren’t any elaborate features to really keep you on edge here. And the main attraction is your conventional freespins round, which is nice, but certainly not extraordinary. We would say the variance of this title is somewhere in the low to medium variance range. So, wins will for the most part be coming in frequently, but in small portions. And you can expect somewhat larger payouts from the freespins round.