Gnome Wood is an online slot game by casino software developer Rabcat. This title offers a very unusual, but very intriguing theme. And it delivers it beautifully with exquisite high quality graphics, attractive features and an overall very compelling setting. There’s an elaborate soundtrack playing in the backdrop that’s predominantly a flute melody. But in addition to that you can hear birds singing, which is only appropriate seeing as you’re in the middle of the woods. And it’s a magical wood, at that. There’s a small dwelling hidden away under a hill to your left, with large mushrooms growing on top of it. And to the right, in the distance you can make out an altar of sorts, with more giant mushrooms on the way to it. And in the middle of this lovely nature idyll are the reels of the game that are quite interesting on their own already. 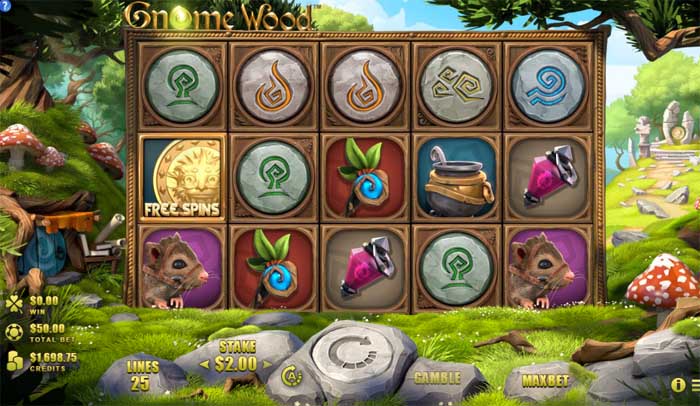 First of all, the symbols are quite unusual and unlike what you see in any other slots. The lower value icons each represent a different natural element in the shape of a stone and a symbolic drawing on it. There are four of these, obviously, and they are Earth, Water, Air and Fire. This brings us over to the even more intriguing higher value symbols on the reels. And the first of them is a purple amulet, following which we have a beautiful blue spiral ornament. Next, we have a book symbol, after which there is a cauldron. Then there’s mouse, which is the gnome’s faithful steed. And last but not least we have the gnome symbol. With its help you can pocket up to a whopping 1,000 times your total stake! The layout in Gnome Wood is fairly traditional, featuring 5 reels and 3 rows with 25 paylines. The paylines are fixed, however, so you cannot regulate them. And this in turn reflects on the betting amount, which spans from 20p per spin up to the maximum of £50 per single spin. There’s also a quite decent RTP of about 96.63%.

As we already pointed out, this title boasts several very attractive features. In addition to them, it also has a Wild symbol, which can appear in any positon on the reels. It’s also just as lucrative as the Gnome symbol, if you manage to get five on a payline. But more importantly, the Wild is here to substitute for other symbols on the reels and create winning sequences. The only symbol that the Wild cannot substitute for is the slots Scatter symbol. However, we should point out that the Wild cannot appear on the first reel if you initiated the spin. Let us explain.

Whenever you land a Wild symbol on the reels, it triggers the Wandering Wild feature. As a result of it, you will enjoy a respin, during which the Wild or Wilds you landed will move one position to the left. This will continue until you see the last Wild drop off the face of the screen from the first reel. So, potentially it can go on for a while if you keep landing more Wilds. And along the way you can also get some pretty decent rewards. Note also that during the feature, some Wandering Wilds can even appear with a 2x multiplier. Thus, if a Wild like that happens to be part of a winning payline, it will double the payouts for it.

And last but not least, there’s also the gold coin symbol to look out for, which is the game’s Scatter. It doesn’t offer any payout of its own, but can appear anywhere on the five reels. And you will be looking to gather at least 3 of these on the screen during the same spin, in order to trigger the freespins bonus round. Regardless of how many you land, though, you will receive an initial 10 freespins. And during these freespins, you can also trigger the so-called Bonus Spins by landing Wilds on the reels. This is very similar if not identical to the Wandering Wilds feature we described above. And these Bonus Spins will also not take away from your freespins.

Speaking of those, you can retrigger the bonus feature by landing another 3, 4 or 5 Scatters at the same time. This will award you another 10 freespins on top.

If there were one word we would have to use to describe Gnome Wood it would definitely be enchanting. This title offers superb visuals and a really cute and fun theme. Besides that, it’s medium variance, so there can be some pretty decent wins at evenly spaced intervals coming in throughout gameplay. In addition, there are two attractive features to enjoy, whereas the Wandering Wilds is unusual and lucrative at the same time. But the main focus would of course be the freespins feature.