Poltava is a very atmospheric and incredibly detailed online slot game by ELK Studios. It offers superb graphics and a very somber, yet majestic soundtrack to go with them. The game is based on the famous battle of Poltava between the Swedish royal forces and the army of Peter the Great of Russia. The game is also rich with 19th century styled icons and the background transports you directly to the woods of Ukraine, where the battle took place.

With 5 reels and 4 rows, the game has 40 paylines. The game is available for both desktop and portable devices alike, making it all the more appealing. You can bet from 20p up to £100 per spin.

The least impressive of the special features in this game would probably be the Marching Reels feature. There are three different symbols in the game that can trigger this feature. If you land four of a kind of the Cavalry, Artillery or Infantry symbols, they will grant you a respin. And if you land an additional military symbol on the right of those reels, those will give you additional respins.

What’s more, the troops move to the right, opening doors for bigger wins. And if a higher value symbol of the three combat ones ends up stacked on the reels, it will replace the lower value combination. So a Cavalry stack will take over the Artillery, for example. 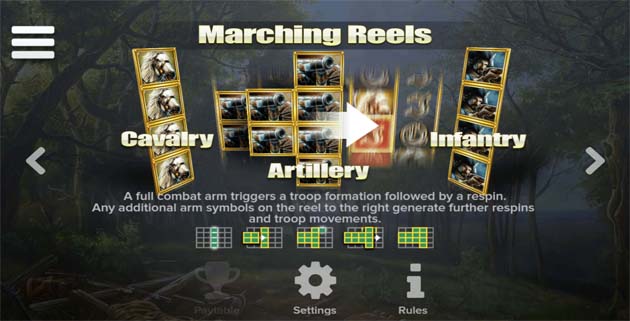 The highest paying symbol in the game is the Poltava Wild symbol. It bears the logo of the game and can replace any of the symbols in it, save for the Scatter. The Scatter, however, is the most interesting of symbols on the reels. It’s in the shape of a golden lion’s head, which will entertain you with the animated feature it comes with.

The Scatter symbol will trigger the main bonus feature of the game – the Flames of War Free Spins feature. If you land three Bonus Lions at a time, this will activate the freespins feature, awarding you three freespins. It may not sound like much, but there’s more to it.

Throughout the duration of the feature you can still land more Bonus Lion scatters. And every time you do, the lion symbol will freeze on the reels, becoming a Sticky Wild. Furthermore, each of them will also add an extra freespin to your current count. 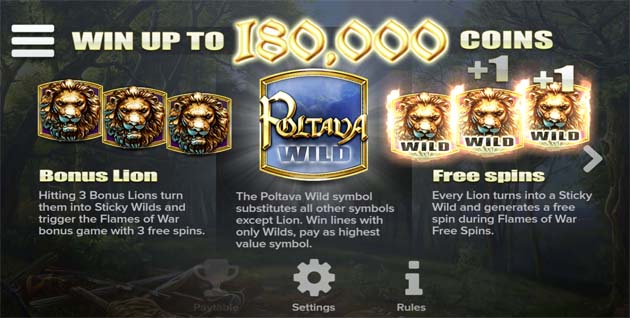 Poltava Flames of War is a visually rewarding, historically themed game with interesting special features. Yes, they don’t seem like much and they aren’t as abundant as one might hope for, but that’s only what it seems like. The game is highly volatile, offering an attractive RTP and the opportunity to win up to 1,800 times your stake. Thus, in our opinion, this makes for a very exciting slot game by ELK Studios.