The Phantom of the Opera slot

The Phantom of the Opera slot review

The Phantom of the Opera is an online slot game by software developer Microgaming and it’s based on the popular musical by Andrew Lloyd Webber. And as one might expect from this particular provider, this offering really does the original justice. It creates a unique ambiance and includes music from the actual musical, so fans will be sure to enjoy this all the more. In fact, there aren’t many online slot games that can boast a rich soundtrack like the one here. A deep male voice will greet you in the beginning to announce the beginning of the opera, which also helps set the right mood. The graphics are, of course, also up to Microgaming’s high standard. And the backdrop here depicts the darkened stage with its heavy velvet curtains. As for what you will see on the reels, much of it comes directly from the 2004 film adaptation. 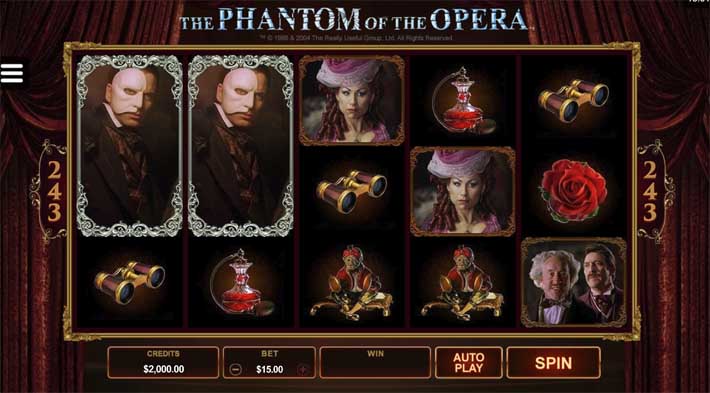 Starting with the lower value symbols, you will see plenty of opera-related imagery. These include a set of binoculars, following which we have an icon depicting an exquisite bottle of perfume. The liquid in it is a bright, ruby red. Next is a leather folder and a few pages of sheet music. And after that we have a symbol depicting the monkey, following which is a crimson rose. This brings us over to the higher value icons – the character symbols. They include Monsieur Gilles Andre and Monsieur Richard Firmin as one symbol. Next up is Carlotta, after which we have Raoul. And last but not least are Christine and the Phantom himself. The latter is also the highest paying symbol on these reels, not taking into account the special symbols. As for the game’s layout, it’s pretty traditional, featuring a grid of 5 reels and 3 rows. There are 243 ways to win in this offering, meaning there aren’t any paylines that you can adjust. Stakes are fairly reasonable, though, starting at a minimum of 30p per single spin. The maximum available wager amount is £15 per spin. And the slot RTP in The Phantom of the Opera is set at 96.40%.

The Phantom of the Opera special features

The Phantom of the Opera has plenty to offer in terms of its special features. It has a Wild symbol, which can appear in any position, anywhere on the five reels. And when it does appear, it will be able to replace any of the regular symbols present to help complete winning sequences. Thus, it can help increase your winning potential. It comes in the form of the game logo and can also land on the reels in stacks of two. There are, however, two symbols the Wild will not be able to substitute for. These are the game’s Scatter and the Letter symbol.

In turn, the Scatter is the game’s most lucrative symbol, offering up to 100 times your total stake. It comes in the shape of the Phantom’s mask and can also land just about anywhere on the screen. With its help you will be able to trigger one of three different bonus features of your choice. In order for this to happen, though, you will need to land a minimum of 3 Mask Scatters anywhere on the reels. 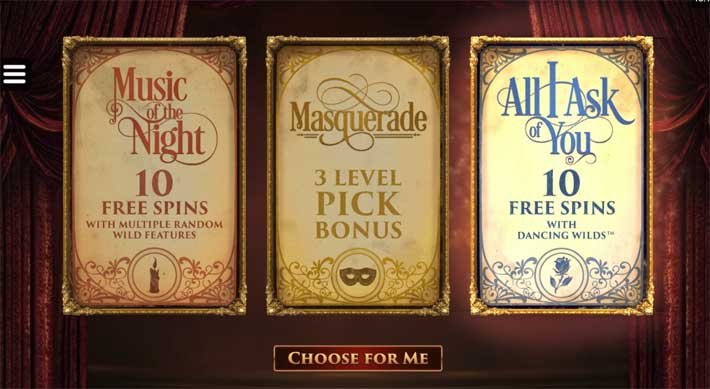 One of these features is the Masquerade Pick Bonus, which will provide you with a selection of masks to pick from. This feature has 3 levels and the masks will reveal different cash prizes. The second feature on offer is the Music of the Night Freespins round, rewarding you with a total of 10 freespins. Each freespin will also benefit from random Phantom features. For example, these can be multipliers of between 2x and 5x, up to 5 additional Wilds, random Wild reels, and even extra freespins. 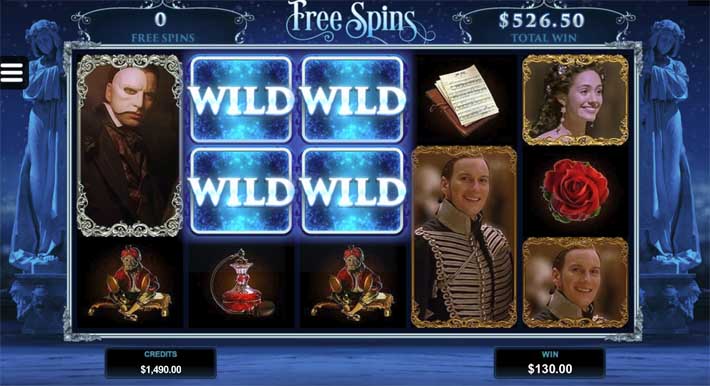 And last but not least is the All I Ask of You freespins bonus, also offering 10 freespins in total. During this feature, Christine and Raoul will turn into Dancing Wilds that can move across the screen during every freespin and potentially award multipliers. 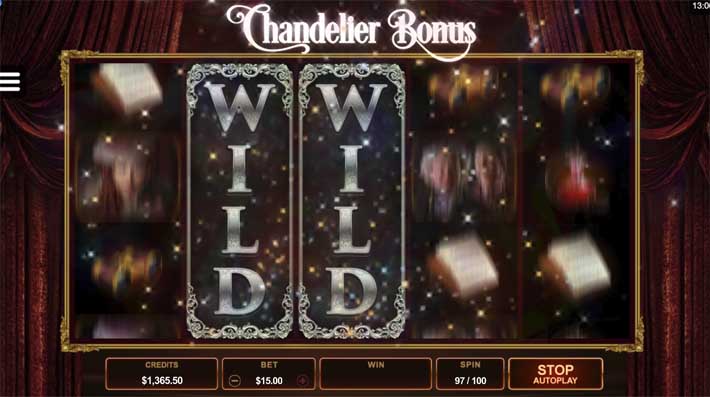 Finally, there’s the random Chandelier Bonus feature, which can take place at any point during gameplay. When the chandelier appears on the screen, it can turn 2 or 3 reels fully Wild. This feature is a bit similar to the Wild Desire feature in Immortal Romance and the Wild Celebration feature in The Finer Reels of Life, these two slots are also made by Microgaming. The Chandlier bonus feature have a lot of potential and can produce mega wins, if you are lucky with the symbols.

Keep an eye out also for the Letter symbol landing on reel 5, as it can award you a cash prize of up to 20 times your bet.

The Phantom of the Opera slot review summary

The Phantom of the Opera certainly comes through with an abundance of special features. This selection should be able to appeal even to the pickiest of players. Furthermore, it boasts a compelling theme and excellent visuals. As far as this game’s volatility goes, it’s a solid medium variance offering. Big wins can come both from the bonus round, as well as in the base game. And then it will, of course, be thanks to the random feature.