Ranging Rhino is one of the most popular slot games by gaming software manufacturer WMS. Already the title is enough to suggest that this game is all about thrill and excitement. The graphics aren’t too new and sophisticated, but don’t let them fool you. Raging Rhino promises very attractive wins during the special features and base game alike. In addition, gameplay is just generally very enticing and keeps players genuinely engaged in the process. The design of the game aims to transport players to the wild savannah – home of the rhinos. Vast golden planes are shown in the backdrop, while the reels themselves tend to focus on their inhabitants. There is quite the number of lower value playing card symbols to begin with. They range from A to K, Q, J, 10 and 9. There’s not much to say about the design of the lower value symbols – it’s pretty universal and doesn’t have a particular affiliation to the theme. The rest of the symbols, on the other hand, are very much at home here. Starting with the notoriously fierce honey badger, the designers have included some of biggest and baddest creatures of Africa. Next are the fearsome crocodile and the agile cheetah. Following them is the silverback gorilla and the mighty rhino himself. 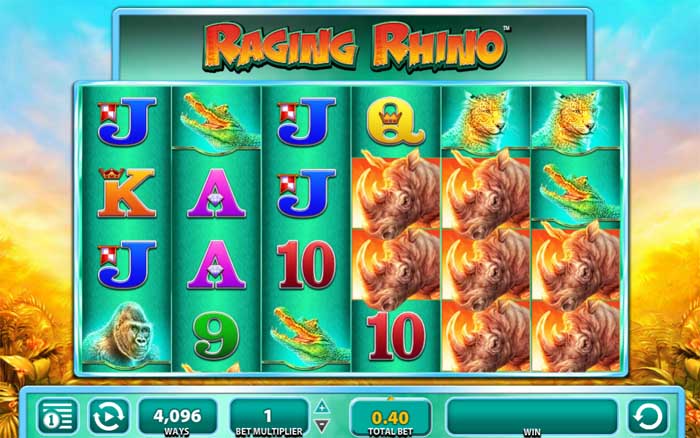 Raging Rhino has two special symbols that you would want to look out for. First is the game’s Wild symbol that pictures a single tree against the golden disk of the setting sun. The Wild symbol can only appear on reels 2, 3, 4 and 5. As any Wild should, it can replace any of the regular symbols in order to contribute to winning sequences. However, the only symbol it cannot substitute for is also the most lucrative icon on the reels – the Scatter symbol. In this slot it bears the name of the Feature symbol and ironically depicts a glistening diamond. It can appear anywhere on the reels and can activate the single bonus feature that this game has. But it’s not just any bonus feature, either. 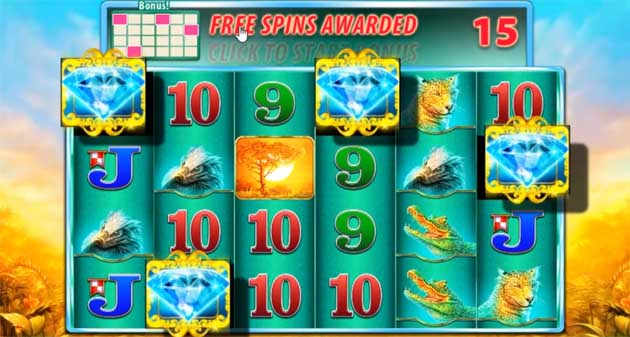 In order to take advantage of the bonus round, you will be looking to land a minimum of 3 Diamond Scatter symbols at a time. The number of Diamonds you land will determine the amount of freespins you will receive. Thus, 3 Scatter symbols will grant you a total of 8 freespins. 4 Diamond Scatters will give you 15 freespins and 5 Diamonds will land you 20 freespins. Last but not least, if you land the maximum of 6 Diamond Scatters, you will hit a total of 50 freespins. What’s more, though, you also get the chance to retrigger this feature and gain even more freespins. But what adds an extra juiciness to this round is that you can retrigger it with as little as 2 Scatters only!

This way, you can gain another 5, 8, 15 or 20 freespins at a time on top of the amount you still have. You can easily keep retriggering this feature for as long as it lasts, too. But there’s even more. Any Wild symbol that appears on reels 2, 3, 4 and/or 5 and is part of a winning combination will transform into a 2x or 3x multiplier. And be sure to widen your pockets if you land 3 or more Wilds and Rhino symbols during a spin. This is where you can expect to receive unfathomable payouts, so do keep an eye out for this combination. What’s more, this game uses the Bonus Guarantee technology, which ensures that players get rewards during every bonus round. The payouts should be at least 10 times your stake and if they don’t reach that amount by the time the freespins are over, it will automatically increase to meet the minimum requirement. 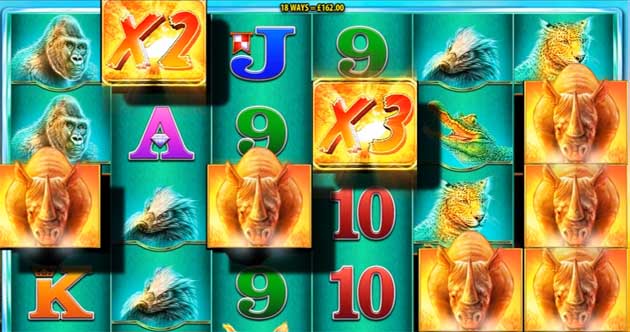 Raging Rhino is an extremely volatile slot game, so it does call for some care. The freespins feature is, of course, what we like best about this game. It’s fairly easy to retrigger with only 2 Scatters necessary for the job and if you manage to do it for long enough, you can gather some really impressive payouts. In addition, the fact that the Wilds can contribute so greatly during the freespins towards winnings is also a very promising touch. And if you don’t want to take our word for it – thousands of players can’t be wrong. This slot is perhaps the most played slot by WMS to date.