Lucky Wizard is an online slot game created by Red Tiger Gaming. It takes you to a magical forest with various shrubs and tree mushrooms growing all over the place. There’s loads of green and with some of the symbols you might even get the Irish luck vibe. And to an extent we can justify that: the colors, the imagery and even the main character all kind of remind you of leprechaun themed slots. But at least there aren’t any rainbows. As for the symbols here, they include the lower value playing card suits: clubs, diamonds, hearts and spades. They’re all nice and brightly colored to work with the theme. In addition to them, there’s also an open book, a wizard’s pointy hat, a gold star and a golden horseshoe. The last one will also offer you the highest from this bunch of up to 400 times your stake. 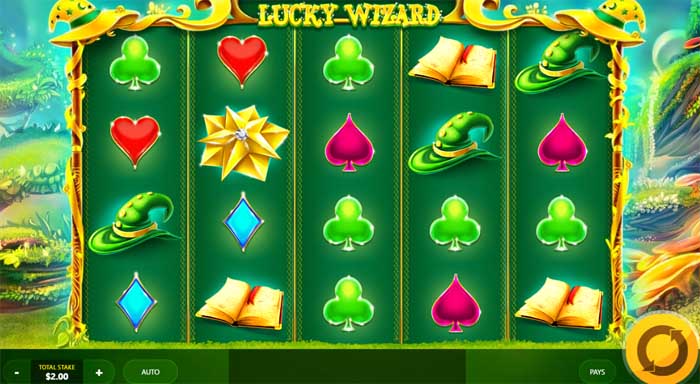 And as for the layout, you will notice it is slightly different from the majority of other slots out there. It features a grid of 5 reels and 4 rows with a total number of 40 paylines. However, you will not have the option of adjusting them. Instead, you will be able to enjoy a pretty wide betting range, spanning from 20p per spin up to £500 per single spin. The RTP is also somewhat higher than the majority of Red Tiger slots – 96.42%.

First up, the golden 4-leaf clover symbol is also the game’s Wild. It can appear in any position on the reels and will also offer you highest value with payouts of up to 800 times your stake. Furthermore, it will be able to assist you in creating winning combos by replacing any of the other symbols on the reels. The only icons that it will not be able to substitute for are the two Bonus symbols. 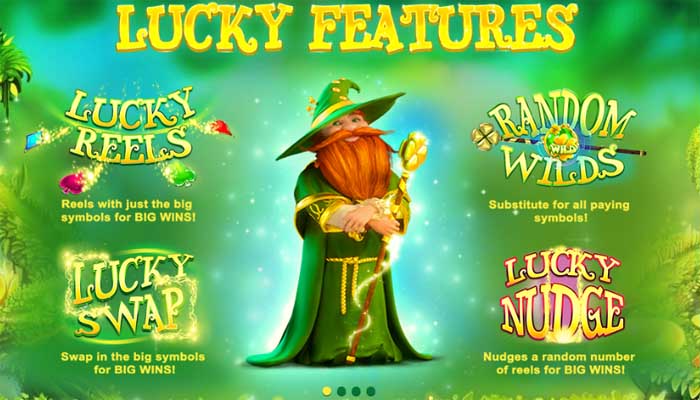 One of them is the Lucky Win Bonus symbol, which can only appear on the middle reel. Whenever you manage to land it, you will get a random cash prize. As for the second special symbol, it’s the Lucky Bonus symbol. Just like the Wild, you can see it anywhere on the reels. However, to make the most of it, you will need to land at least three of these during a spin. This will activate a pick-me game, where you will need to choose from 6 different potions. When you pick one, it will reveal how many positions the wizard will move, after which you can keep picking until you just get a number.

Last but not least, there are also 4 random features in this slot game. One of them, for example is the Lucky Reels feature. It will remove all the lower value playing card suits symbols from the reels.

Lucky Wizard is a good online slot game for new players due to its medium to low variance. It may be a little disappointing, however, that it doesn’t features any freespins. But the abundance of other extras will still offer you plenty of diversity.