Redroo is a cool online slot game by software developer Lightning Box Games. There are some pretty decent graphics on offer here, as well as a different theme. Ever wanted to travel to Australia? Hang out with some kangaroos or Australian shepherd dogs maybe? Well, you will certainly have that opportunity with this online slot game. Visit the vast grasslands and the scorched landscape of the land Down Under. You can clearly see the typical nature of the continent in the game’s backdrop. But players will also get a look of its other side during the bonus feature. And the reels will demonstrate some of Australia’s most famous inhabitants, including the red kangaroo – hence the title. Besides that, the soundtrack here also features the digeridoo, which is one of Australia’s native musical instruments. And we really love it, because it adds that extra layer of authenticity to the slot. 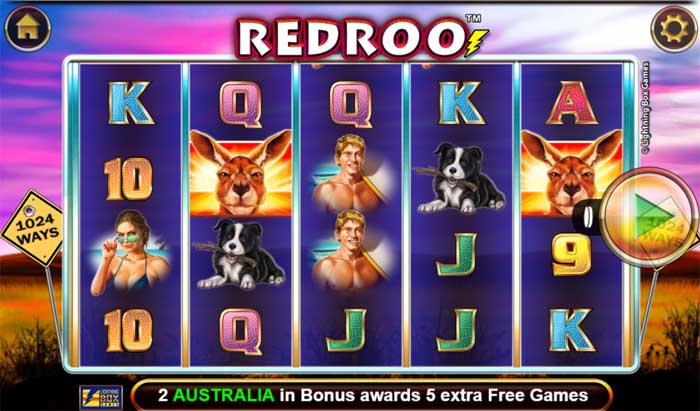 But let’s now have a closer look at the symbols you will be seeing on these reels. First of all, we have the lower value playing card icons A, K, Q, J, 10 and 9. Each of them comes in a different color, as is custom. But they all have a kind of interesting pattern on them. You will notice that their look will change to a more beach-themed one, once you leave the base game. Following these, we have the somewhat higher value couple of pink parrots and the cute shepherd dog, holding a stick in its mouth. And that brings us to a further bump in value for the two character symbols: surfer boy and beach chick. Apologies for those terms, but that’s about as cliché as you get. Last but not least is the most lucrative kangaroo symbol. Notice that the layout in Redroo is slightly different from the norm, featuring 5 reels and 4 rows. On top of that, there are a whopping 1024 ways to win, which is great. And players here can enjoy an enormous betting range, spanning from 40p per spin up to £280 per single spin. The long term theoretical RTP is a bit underwhelming, though, at only 95.3%.

The Wild Rock symbol, depicting the red mountain, is the game’s Wild. As such, it will be able to replace any of the other symbols on these reels. That way you can expect it to help you out by creating new (potentially better) winning sequences for you. However, it doesn’t offer any payouts of its own. And on top of that, you also won’t be able to see it just about anywhere on the screen. As a matter of fact, the Wild here can only land on the middle reels 2, 3 and 4. So you’re going to want to keep an eye out for it. One more thing is that the Wild will not be able to substitute for the symbol depicting the Australian continent – that’s the game’s Scatter icon. Better yet, you will also get to benefit from the 2x or 3x multiplier on all Wild winnings. And if you have more than one Wild symbol in a winning combination, you can count on the multipliers for each of those multiplying on themselves! So, for example two multipliers of 3x each will give you a total of 9x. 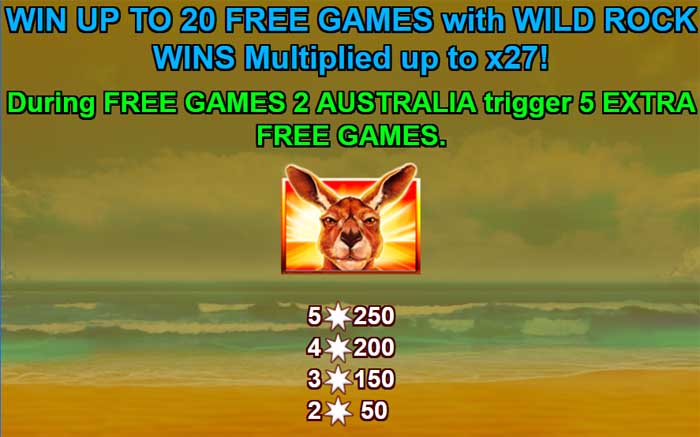 The Australia symbol, aka the Scatter, can appear in any position on the reels, unlike its Wild counterpart. Furthermore, it’s also the symbol offering the highest payouts in all of the game. As a matter of fact, you can potentially pocket up to 800 coins with its help. But more importantly, the Scatter will be able to trigger the freespins bonus feature. In order for that to happen, though, you will need to land a minimum of 3 Scatters all at the same time on the reels. This will result in you receiving 8, 15 or 20 freespins – depending on the number of Scatters you landed. You can also retrigger the feature by landing another 2 or more Scatters. Two Scatter symbols during the bonus round will award you the minimum 5 additional freespins. 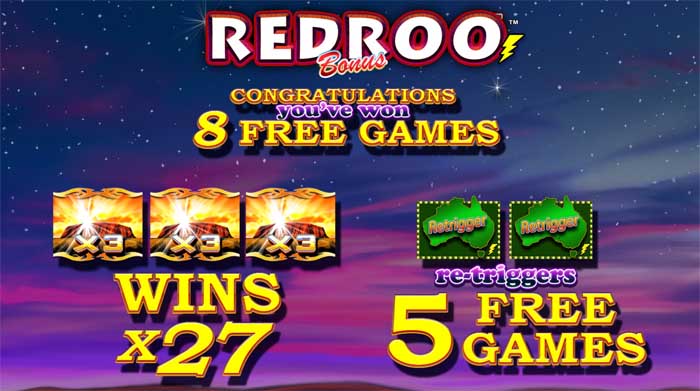 And as the Wild will still be present during the freespins round, you can count on benefiting from its multipliers then as well. So, potentially, this can prove to be quite the lucrative feature.

Redroo is an enticing medium to high variance online slot game. The graphics here are of great quality, offering some decent visuals and even some entertaining animated sequences. For example, a kangaroo will hop onto the screen to mark winning combos. But what’s more than that is that you have the very lucrative Wild that can offer some pretty handsome wins. And in addition to that, there’s also the fairly decent freespins round, which can also prove very rewarding. Just be patient, as triggering it may require some time.