Blueprint Gaming has made a beautiful effort to provide players with a wonderfully magical slot game. The title Luck O’ the Irish would suggest things like rainbows, four-leaf clovers and leprechauns and that is exactly what this slot game is all about. The backdrop features a stunning green field, and a vivid rainbow against a clear blue sky. The music that will accompany the spinning of the reels is just as dreamy and magical. There are interesting symbols on the reels, too, though they aren’t insanely diverse. They feature the lower value playing card symbols, each in a different color of the rainbow: A, K, Q, J and 10. Following them are a green, blue and red gemstones. And finally, the most lucrative symbol in the pot of gold, offering up to 500x your stake.

There are 5 reels and 3 rows in this game, with a total of 10 paylines. You won’t be able to adjust their number, however. Instead, you can play around with the bet amounts and set them to be anywhere from 10p per spin up to £100 per spin. The RTP is a fairly reasonable 95.23%.

The highest paying symbol depicting the pot of gold is also the Wild symbol on these reels. It can appear in any position, anywhere on the screen. And as a Wild is expected to, it can replace any of the regular symbols to help create winning combos. In addition, it can also appear stacked. 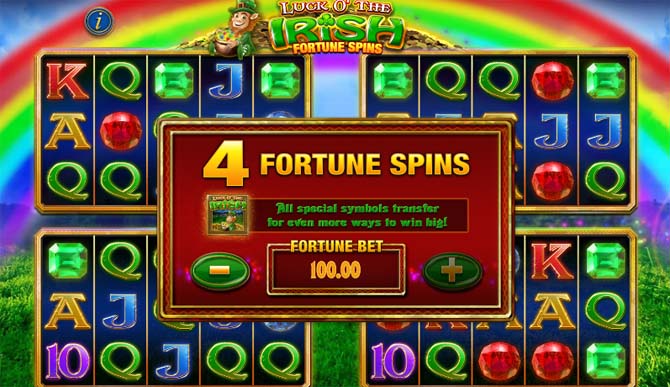 However, there is one more special symbol you will want to look out for. It’s the Luck O’ the Irish logo, which can only appear on the middle reels 2, 3 and 4. It is also the only symbol that the Wild cannot replace. In addition, it is also the symbol that triggers the single special feature that this slot has to offer. The first thing you need to know about this Scatter symbol, though, is the fact that it is only active during the Fortune spins. The Fortune spins will offer you to play on four sets of reels for a larger bet amount. Furthermore, all special symbols that appear on one set will transfer to the others for extra wins.

Now, the Scatter that it the game logo will be responsible for activating the freespins feature. In order to do so, you will need to land 3 Scatters during a spin. This will award you 5 freespins on a separate set of reels, with a stacked gold coin symbol, which can transform into random matching symbols. Furthermore, you can also retrigger this feature for an additional 5 freespins by landing another 3 Scatters.

Luck O’ the Irish includes all the most stereotypical Irish imagery and, though this is a relatively common theme, the developers have presented them in a more than decent packaging. However, it may prove to be a bit monotonous after a while due to the single bonus feature.