Who doesn’t like a good Chinese themed online slot game? Especially now, when there’s a new wave of popularity of the genre. And it’s more so when you can really enjoy a high quality design with entertaining visuals. So who would be better fit to provide players with a slot like this than software provider Microgaming. Six Acrobats gives us a different side of Chinese culture, something we rarely see in this field. Instead of going with the traditional royal palace settings, with red and shiny gold ornaments all over the place, the developers here have taken a hand-drawn approach to the graphics. This slot brings you to the Chinese theatre and introduces you to some of its finest performers. There’s also a really compelling soundtrack playing, which we really like. And it goes a long way in conjuring up the right vibe. 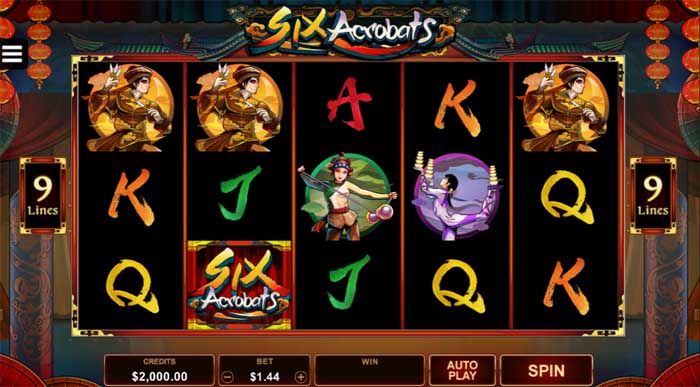 As for the symbols here, we have the lower value playing card icons. These are very nicely styled to fit in with the theme. And they include the symbols A, K, Q, J and 10. This brings us then to the higher value symbols, namely the acrobats. Although you will only notice that there are five of them. But we’ll explain why that it is in a bit. First we have the girl balancing stacks of plates on her hands and one foot. Then there’s a young man balancing a very large pot in an awkward position on his forehead. Next is another acrobat holding an outstretched string with a diabolo on it. Finally, we have an acrobat, specializing in throwing knives and other sharp objects, and one, who does tricks with fire. The latter is also the highest paying symbol on these reels. The layout in Six Acrobats features 5 reels by 3 rows, with a total number of 9 paylines. Those are fixed, so you can’t regulate their number. But the stakes in this slot are fairly liberal, starting at only 9p per single spin. The maximum amount you will be able to wager is £22.50 per spin. And the RTP here is at a fairly decent 96.5%.

The game logo is also its Wild symbol, meaning it can replace any of the other symbols on the reels. In that way, the Wild can also make for better winning opportunities. That is especially true due to the fact that it will multiply the payouts for winning combinations it partakes in. In fact, the multiplier for all Wild payouts is 5x! So even though it doesn’t offer any prizes of its own, that’s definitely something to look out for. In addition, it can also appear in any position, on any of the five reels. However, there is one symbol that the Wild cannot substitute for and that is the final, sixth acrobat icon.

The sixth acrobat also happens to act as the game’s Scatter. Very much like the Wild, it can also land anywhere on the screen. And it also doesn’t offer any payouts of its own. But for that matter, it will be able to activate this slot’s single special feature – the freespins bonus round. To trigger the feature, you will be looking to land a minimum of 3 Scatter symbols at the same time during a spin. This will award you a total of 15 freespins. But you can also count on more freespins, if you land more Scatter icons. Thus, 4 Scatters will give you a total of 20 freespins. And finally 5 Scatter icons can offer you the maximum amount of 25 freespins.

Better yet, though, all freespins winnings in this feature will also be subject to a 5x multiplier! And can you guess what that means for the Wild wins multiplier? That’s right, those two will multiply by each other. So in that this translates to a 25x multiplier on all Wild wins during the freepins bonus feature. How crazy is that?! But that’s not all. For every Scatter symbol that you land on the reels during the bonus round, you will also receive an additional freespin. And there’s no limit as to how many of these you can gather throughout the feature. But what you will really be aiming for is to land as many Wilds and form as many winning sequences with them as you possibly can. 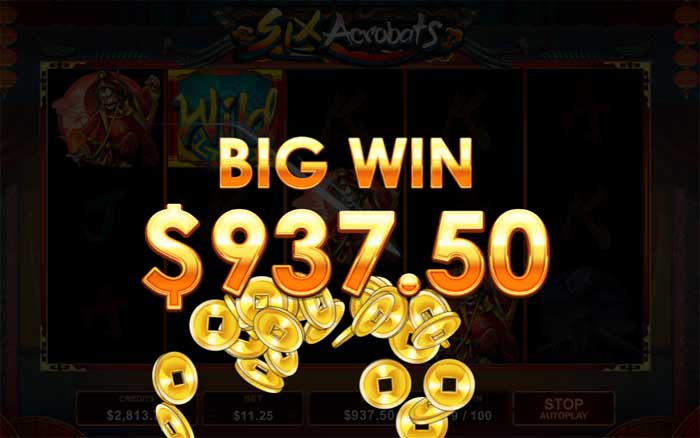 Six Acrobats is a very dynamic, fun and also thrillingly dangerous online slot game. Don’t let the fairly low betting amounts fool you. This is a highly volatile title that can demolish your bankroll in no time. But it can prove to be just as epically rewarding, too. There are up to an amazing 4,333 times your total stake to be pocketed per spin in this game. And, of course, those winnings are set to come from the freespins round. All in all, it’s a fantastic slot game with great winning potential. But don’t expect the bonus round to come easily.