Viking Runecraft is an online slot game that focuses on the legendary warriors of the north – the Vikings. It’s brought to us by software provider Play’n GO and boasts some pretty great graphics and visuals. In the backdrop you can see the God of Thunder – Thor, standing tall and hardly dressed in the harsh winter winds. You can even see his legendary hammer, of which you will also see plenty on the reels, too. The Thunder God’s eyes occasionally light up, revealing his true nature. Behind him and behind the transparent reels you can also see the icy terrain of the far north. But aside from that, there’s plenty of more on the screen that initially won’t really make sense. For example, to the right you will notice strange formations. And to the left there will be an odd wheel of sorts with unknown markings and an empty window below it. 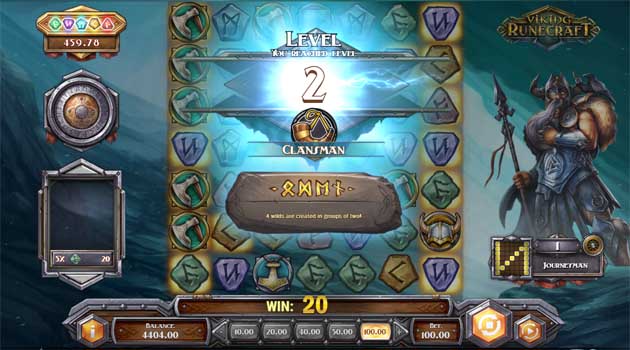 Another thing you are likely to notice straight away is the very unusual layout of the game. It covers pretty much the entire screen from top to bottom, and not because the positions are large. Pretty much on the contrary, they’re relatively small. The layout features 7 reels and 7 rows and even more interestingly, there are no paylines. Winning combinations are formed by lining up 5 or more matching symbols horizontally or vertically. This makes for an oddly flexible betting range, as well. You will be able to wager anything from 10p per spin up to the maximum of £100 per single spin. As for the symbols, there are five lower value rune symbols, which you can distinguish by color, if you’re not too well aware of what they represent. Following them is a Thor’s hammer pendant, a battle axe, a helmet and a hammer. The RTP here is also refreshingly high at 96.7%.

Gameplay is quite a bit different in this slot game, but it has a number of different special features for you to enjoy. First of all, we should note the cascading reels. Notice that when you click spin, the reels all through and new ones fall into their place. That is also what happens with the symbols that create winning lines: they disappear and new ones fall into their place. That way you can make more out of each spin. And every time you win like this, you will fill up the meter on the left of the reels. If you manage to fully charge it, you will trigger one of the four available “Charge of Destruction” bonus features. 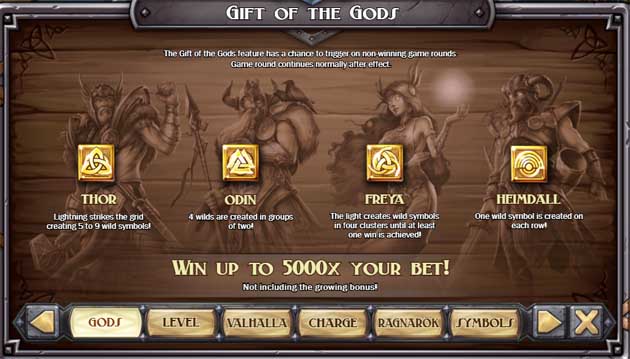 One of them, for example is the Judgement of Jörmungand feature. The giant serpent will come onto the reels and snake through them, leaving behind a trail of a single random symbol. Another one is the Fury of Fenrir feature, where two diagonal lines will disappear and two other ones will turn into the same symbol. Then there’s the Lure of Loki feature, where one symbol will disappear from the reels completely. And a second symbol will just turn into another one. Finally, there’s the Scorching of Surtr  bonus feature, where random symbols will catch fire and burn, making way for new symbols. And after you’ve played one of these features, if you can charge the meter again, you will trigger the Ragnarok bonus feature. As a result, you will gain one freespin and the meter will then become the End of the World Bonus feature. This can award you a multiplier of up to 15x your wins.

Furthermore, notice the rune that you will see on the right side of the reels. You will need to create winning combos so as to cover the rune, after which you will advance to the next level. Each level has its own god: God of Thunder, God of Wisdom, God of Beauty and God of Guarding. You will be able to benefit from a separate random feature for each of these during the base game. For the most part, these will just be clusters of extra Wilds that will appear on the reels. And last but not least, there’s the Runes of Valhalla feature. If you can gather the minimum of one Rune Stone symbol winning sequence and cover the active rune pattern, you will trigger the bonus round. After this you will be able spin a wheel and potentially win an attractive cash prize.

Viking Runecraft is an incredibly volatile online slot game. It can potentially allow you to win up to a whopping 5,000 times your total stake during any given spin. In addition, the visuals and gameplay are also very entertaining and keep you on edge most of the time. All in all, it’s a really fun game with massive potential. Just keep an eye out for your bankroll as you spin those reels.